Jorie Graham: Are We Still Capable of Being Custodians of the Future?

Paul Holdengräber is joined by writer Jorie Graham on Episode 139 of The Quarantine Tapes. A celebrated poet and educator, Jorie talks with Paul about the current state of the world, and how the memory of history impacts our future. Paul and Jorie take the time to go in depth in this conversation; Jorie tells stories of her childhood in Europe and her coming of age in the street protests in Paris, and her current life while existing in these confines of the pandemic. They talk of poetry, extinction, oblivion, and how our present is giving new meanings to old words. The pair also unpacks the politics and problems of mob consciousness, and how the future is defined by the human gift of imagination and honoring the past.

Their conversation picks up with a look at how the technologies of social media and the internet are shaping people’s beliefs and our sense of agency. Jorie expresses her fears of our society’s amnesia, worrying that when this pandemic ends, we will act as though it never happened and try to move on without learning anything. Then, Jorie takes a look at the letter left by George H. W. Bush for incoming president Bill Clinton. In a fascinating close reading, she compares that hand-off of power to this year’s election, shining a light at what has changed politically at the level of language.

Jorie Graham: One of the things that has always interested me is this practice that originates, I believe, with the Iroquois Nation, of making decisions at any given moment based on what would be best for the seventh generation ahead. One of the examples given is the leader—the chieftain, the person in charge of the decisions for the community—would walk along the riverbed deciding how much fish to take from the river, imagining that they’re holding the hand of the seventh generation and saying, “How much fish should we take from this river so that you will have fish seven generations from now?”

What’s always interested me about that is that it’s easy for us to imagine our children, their lives, and our children’s children. But increasingly, we have a very hard time imagining further than that in terms of futurity. I always feel that Christopher Lasch’s The Culture of Narcissism was a great book that people could reread, because it really did describe the collapse more and more into presentism, as we call it. That people were unable to really think about people that would live to whom they were not intimately connected, or to whom they could not imagine a direct cord of communication. So that three generations or four from now, those people are unimaginable to us. We can’t bring them to mind as real people, so we will not make sacrifices on their behalf. We will not change our way of living on behalf of people. We might on behalf of our children. That’s always the key—will you do it for your children and your grandchildren? But will you do it for future humans who you do not yet know?

Somehow it was a state of mind, this seven generations—it was automatic for people much wiser than us who inhabited these lands before we committed a genocide upon them. They were able to think about time. And why were they able to think about the future as a deep future in that way, that was so intimate that they were able to make decisions about everyday things in communication with people whom they could imagine, that we cannot?

Partly because the imagination of the future mirrors our capacity to imagine the past. And they were capable of keeping ancestors in mind. As long as you can keep layers of ancestors awake behind you through rituals, through storytelling, through the inheritance of ways of believing, experience, memory—I’ve always felt it was a mirror: however many generations behind you that you can keep in your present generation, by the many means that humans have devised to do so, which is what most of art and civilization is really about—keeping ancestral stories, ancestral belief systems, the past, awake—that is mirrored by how much of the future we can see. And we’ve managed to collapse both sides of that into a kind of place where we cannot imagine very far in either direction.

Part of my thinking about imagining the unimaginable is not just the unimaginable could happen, that terrible things could happen. We could go extinct, we could destroy the planet, we could kill everything on it—that kind of unimaginable. But also the simple imagination of our obligation. We’re only temporarily alive in this sense on this planet, but we have in custody extraordinary creation on behalf of future people. The work that it takes now to convince other humans that they are here temporarily, something that humans knew for a very long time but somehow managed to extinguish in themselves, is the feeling of being here temporarily, of being custodians of something.

I mean, imagine the building of any large cathedral in Europe. Some cathedrals took 900 years to build. Fathers and sons and grandsons and generations and generations of masons worked on Chartres forever. And the idea that you would see it finished in your own lifetime was not something that you even thought was possible because you wouldn’t. And yet you participated in the project of creating this thing that you knew, maybe down the line many generations from now, would be completed. And it wasn’t as if that was too slow. That was what life was like.

Jorie Graham was born in New York City in 1950, the daughter of a journalist and a sculptor. She was raised in Rome, Italy and educated in French schools. She studied philosophy at the Sorbonne in Paris before attending New York University as an undergraduate, where she studied filmmaking. She received an MFA in poetry from the University of Iowa. Graham is the author of numerous collections of poetry, including Sea Change (Ecco, 2008), Never (2002), Swarm (2000), and The Dream of the Unified Field: Selected Poems 1974-1994, which won the 1996 Pulitzer Prize for Poetry. Graham has also edited two anthologies, Earth Took of Earth: 100 Great Poems of the English Language (1996) and The Best American Poetry 1990. Her many honors include a John D. and Catherine T. MacArthur Fellowship and the Morton Dauwen Zabel Award from The American Academy and Institute of Arts and Letters. She has taught at the University of Iowa Writers’ Workshop and is currently the Boylston Professor of Rhetoric and Oratory at Harvard University. She served as a Chancellor of The Academy of American Poets from 1997 to 2003. 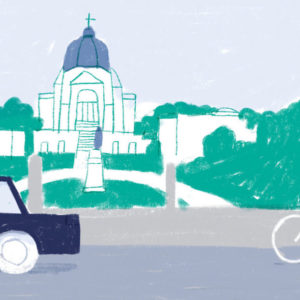 Together with artist Delphie Côté-Lacroix, Valérie Plante in Okay, Universe tells the story of a long-shot municipal candidate....
© LitHub
Back to top