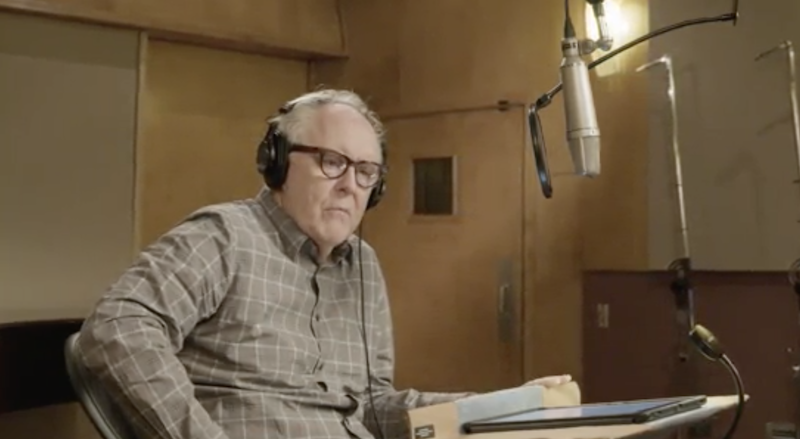 John Lithgow, beloved actor, author, Grammy-nominated vocalist, and Trump satirist-in-verse, recorded William Maxwell’s So Long, See You Tomorrow in December. (You can purchase tickets here.) He shared some first-person insight on his recording experience and his connection to Maxwell’s work.

On acting in different mediums:

All acting work is more similar than different. I’m frequently asked about the difference between stage and film, between tragedy and drama and horror and different genres. I don’t think I’ve ever been asked about what it’s like to perform an audio book. It’s all the same process. You’re channeling the writing or the filmmaking of somebody else, but it’s an extraordinary emotional exercise. It is technical in the fact that you’re actually reading from a page, you haven’t learned your lines and you’re not pretending to be another person. You’re not creating a suspension of disbelief in front of people. You’re doing it all with your voice. But I love it. I’ve done a lot of radio and radio drama and the audio books, they’re hard. I mean, it’s very hard to sustain the energy over a couple of days usually.

On recording So Long, See You Tomorrow:

I remembered it being just packed with detail, the tangible, tactile details of living and working on farms. I didn’t remember the fact that they were tenant farmers and how defining that was and who these two men were. I just loved the sort of detailed economics of their lives, but that went way straight over my head the first time through. It certainly was the scenes that I remembered. It turns out I remembered them very, very accurately. I will never forget those pages where Maxwell does his storytelling from the point of view of Trixie the dog. I mean, that is so heartbreaking. It was almost unbearable to read. And I remember it had that impact on me the first time. Interestingly enough, the only time I’ve read the book, I did read it aloud. So twice through both times, I’ve read it. And in both cases, that’s the actor in me. I just left myself wide open to the kind of emotion that gets triggered when you actually perform something.

On his reading habits:

I’m a very slow reader. It drives me crazy that it takes me so long to read a novel because I love novel writing and I really savor . . . I savor literature almost too much. I can’t read it fast. It’s almost like I have to. In my own brain experiences at best, if I feel like I’m being read to. So I’m not a fast reader. I don’t know. I’ve done a couple of delightful audio books. I did an abridged audiobook of Bonfire of the Vanities by Tom Wolfe, which has a huge long cast list of extraordinary, bizarre, crazy, very New Yorky characters in different accents and different attitudes and different social echelons. That was so much fun because you know that you’re creating a world with just words. You’re creating a big cast of characters with just words.

The recorded reading is available until August, organized by The 92Y. You can buy tickets here.