John D’Agata and the Art of the American Essay

Exploring the Limits of Non-Fiction, One Fact at a Time

How do we define the essay? Ask a hundred writers and you’ll get a hundred answers—which is, of course, the whole idea. “You have to push yourself,” John D’Agata notes in A New History of the Essay, “push your peers, push your readers, push your critics, push your culture, push your forbears, push your instincts and beliefs and fears. You have to be willing to disrupt the history that you are already a part of. … That is what we owe to history: Risk. … And the courage to make the essay our own.” It is both a provocation and a coming to terms. What D’Agata is describing, after all, is the essay as essai (in Montaigne’s formulation): an attempt, a try, a framing of a question or a set of questions, an inquiry into consciousness or life. “So let’s lay it all out.” D’Agata writes. “I believe the goal of art is to break us all open, to make us all raw, to destabilize our understanding of ourselves and of our world that we might experience both anew, with fresh eyes, and with the possibility of recognizing something that we had not recognized before.”

A New History of the Essay is one of those projects: quixotic, ambitious, an attempt (that word again) to frame the genre by accretion and nuance. It’s been a decade-and-a-half in the making, a triad of anthologies, the last of which, The Making of the American Essay (Graywolf), has just been released. “I pitched an anthology to Graywolf when I was in my early twenties,” D’Agata—who runs the Nonfiction Writing Program at the University of Iowa—recalls by email, “at the same time they accepted my first book, Halls of Fame. The idea was for a single anthology that spanned all time and every culture. … Luckily, Fiona McCrae, the publisher, didn’t laugh me out of the press when I brought the idea to her. Instead, she basically said, ‘Ok … good idea. But you’re 23. … It might be safer to do a volume of essays that are a little more contemporary, a little more American and familiar to readers. And if that sells well, we can go back and do some other volumes.’” That initial collection, The Next American Essay, covered 30 years, beginning in the 1970s, and gathered work by, among others, Annie Dillard, Jamaica Kincaid, John McPhee, Joan Didion, and Sherman Alexie. It seems oddly fitting (in the sense that the essay is always circling, working back to front or even sideways) that, in regard to order of publication, the closing installment of the trilogy should have appeared first.

I’ve been wanting to discuss the essay with D’Agata since his book About a Mountain—a meditation on the relationship of fact and fantasy, built in part around nuclear waste disposal at Yucca Mountain, outside Las Vegas—came out in 2010. There, he entered what has become an ongoing controversy in nonfiction circles by admitting he’d reworked certain details, certain facts. “Although the narrative of this essay suggests that it takes place over a single summer,” D’Agata writes in his endnotes, “the span between my arrival in Las Vegas and my final departure was, in fact, much longer. I have conflated time in this way for dramatic effect only, but I have tried to indicate each instance of this below. At times, I have also changed subjects names or combined a number of subjects into a single composite ‘character.’” Two years later, he went even further in The Lifespan of a Fact, which reprints his Believer essay “What Happens There” with a Talmudic dialogue between the author and fact-checker Jim Fingal over the necessity, or desirability, of sticking strictly to the facts. “I’m not calling this ‘nonfiction,’” D’Agata argues late in that book, “and neither do I tend to call anything that I write ‘nonfiction,’ because I don’t accept that term as a useful description of anything that I value in literature. The only reason this is being labeled ‘nonfiction’ by your editors is because that is one of the two binary categories that editors allow in prose.” Let me say, so there is no mistaking my intent, that I agree with him, down to his dissatisfaction with the word “nonfiction”; as he writes on the very last page of The Making of the American Essay, “if fiction comes from fictio, the Latin word for “make,” then doesn’t that mean that non-fiction can only mean “not art,” prohibiting the genre from being able to do what every art medium does: make?”

What D’Agata has in mind, on one level, is to push the conversation, to throw a thought-bomb into the center of the room. That’s useful, crucial even, when it comes to essay writing, and it animates A New History of the Essay as well. At the same time, as he makes clear in our correspondence, it’s too straightforward a perspective, not nearly intricate enough. “On an aesthetic level,” D’Agata answers when I ask about it, “I don’t put a lot of stock in verifiability in nonfiction because for me there are more exciting ways to make nonfiction. But on a deeper level, on a (dare I say) spiritual level, I just don’t believe in the conceits of facts.” He continues: “I want an essay to surprise me. I want it to transport. I want to enter an essay in the here and now and then exit it in an entirely new place—a new place intellectually, emotionally, spiritually. I want to feel like I’ve been changed. So I’m looking for a transformative journey.” The essay, in other words, must work as art, not merely reportage; it must tell us something we don’t already know. The same is true of the genre as a whole, an idea D’Agata makes explicit in The Making of the American Essay and its precursors by essentially writing though the history of the form. Each essay is prefaced by a short text, more essay than explanation, offering aesthetic context, a framing mechanism. In one, introducing Gertrude Stein’s “If I Told Him: A Completed Portrait of Picasso,” he writes of the moment Ansel Adams learned to evoke emotion in a photograph. Another, which sets up Laura Riding’s “In a Café,” refers to Werner Heisenberg and his Uncertainty Principle; “Knowledge,” D’Agata observes there, “isn’t impossible, Heisenberg would insist. Knowing is.” If that seems a semantic distinction, involving the arrangement of letters and syllables … what’s vital is the middle territory it suggests, between perception and reflection, that the essay occupies.

For D’Agata—and for me also—this makes the question of accuracy, of verisimilitude, overstated at best and more fundamentally, beside the point. What’s important is imagination, the interplay between creativity and experience. It is this that makes the essay art. That has as much to do with how we think about the genre as it does with how we write within it; a central aspiration of A New History of the Essay is to stake out a lineage. The Making of the American Essay, for instance, includes an extract from Moby-Dick, configured as an essay. The Lost Origins of the Essay presents William Blake’s “The Marriage of Heaven and Hell” through a similar lens. Then, there are the deep sources, antecedents so ancient they predate genre, our inclination to categorize, to classify by form. The Lost Origins of the Essay incorporates Theophrastus of Eressos, Seneca, Sei Shonagon, T’ao Ch’ien; it begins with a list of rules for living (“The eyes of the slanderer always move like a spindle”; “[D]on’t ever buy a donkey that excessively brays, for this is the kind of animal that will knock you on your ass”) set down by the Sumerian king Ziusudra, dating from 2700 B.C. “Does the inclusion of these texts,” D’Agata emails, “mean that they’re essays? No. But my hope is that [their] inclusion … might encourage open-minded readers to question what an essay is. … What I cherish in any art form is the moment a project asks ‘what if?’ I think that there are a lot of fictions and poems that function essayistically, and I think that it’s not only fun to read them as such but also important to ask ourselves what that means.”

There’s more to it, of course, what we might classify as a tradition, although when it comes to a form as open as the essay, this both is and is not a contradiction in terms. When I met D’Agata, at a lunch this past November in Manhattan, he described visiting a town in Greece called Chaeronea, where he was shown a chair that had once, or so the legend went, belonged to Plutarch. The story is recounted in a reader’s note to The New History of the Essay, and the point (or one of them, at any rate) is that the chair couldn’t possibly have been his. And yet, what do we do with that myth, that supposition, that narrative, passed down across millennia, a thin tendril of connection between Plutarch’s time and ours? “I don’t know what history owes us,” D’Agata writes, “but … I have been thinking a lot about what we might owe to history.” When I ask him to elaborate, he responds, “What I love about history is that it tends to inspire in me a sense of camaraderie with something outside of myself. I love exploring the history of the essay because it invites me into an artistic heritage, an opportunity to feel like I am part of something that’s bigger than I am. We still don’t tend to teach the essay alongside poetry and fiction in English classes. You probably have to go to grad school before anyone’s going to seriously ask you to consider the literary qualities of an essay. And because of this, we leave school without the same appreciation for essays that we have for fiction or poetry. We are poorly trained essay readers. So I think the more we insist on claiming the legitimate essays that are in the essay’s history, the more likely it is that we’ll eventually start seeing those texts taught as essays, and thus start seeing readers more prepared to explore the contemporary essay with us.”

This is key, the notion that we are in it together, writers and readers, past and present, engaged in a conversation, a back-and-forth. This is why we read and write, and if that’s the case across the blurry bounds of genre, A New History of the Essay suggests it may be especially so in regard to this most fluid of forms. “I think,” D’Agata insists, “that it’s the writer’s responsibility to make sure that the literary heritage that they think they’re part of is known to the readership that they’re trying to communicate with. I think that’s fundamentally why these anthologies exist. It’s not why I started them, but I now think it’s what I was subconsciously thinking. It’s my way of saying, ‘These are my heroes. These are my kin. This is the context in which I want you to read my stuff.’”

David L. Ulin is a contributing editor to Literary Hub. A 2015 Guggenheim Fellow, he is the author, most recently, of Sidewalking: Coming to Terms with Los Angeles, a finalist for the PEN/Diamonstein-Spielvogel Award for the Art of the Essay. 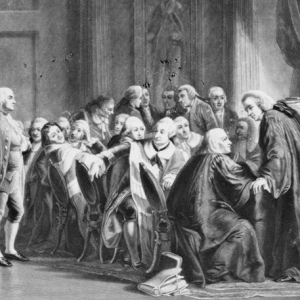 David L. Ulin in conversation with John D’Agata about the art of the American essay. | Literary Hub Lisa Levy...
© LitHub
Back to top