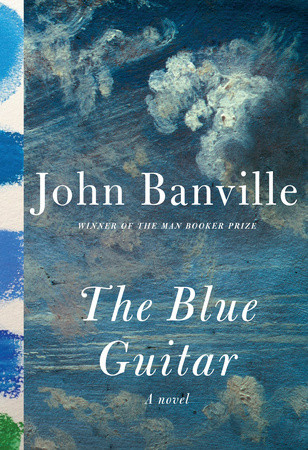 The following is from John Banville’s novel, The Blue Guitar. Banville was born in Wexford, Ireland, in 1945 and is the author of sixteen novels and a short story collection. He has been both short-listed for the Booker Prize (1989 for The Book of Evidence) and awarded the Man Booker Prize (2005 for The Sea) as well as nominated for the Man Booker International Prize (2007).

I am going to think about the night I finally fell in love with Polly, finally for the first time, that is. Anything for diversion, even though thoughts of love are what I should be diverting myself from, seeing how hot the soup is that love has got me into. It happened at the annual dinner of the Guild of Clock­makers, Locksmiths and Goldsmiths. We were there as Marcus’s guests, Gloria and I—Gloria under protest, I may add, she being as susceptible as I am to boredom and general fed-upness—and were sat with him and Polly at their table, along with some others whom we needn’t take any notice of. Beefsteak and roast pork on the menu, and spuds, of course, boiled, mashed, baked or chipped, not forgetting your perennial bacon-and-cabbage. Perhaps it was the flabby stink of seared flesh that was making me feel peculiar; that, and the smoke from the candles on the tables and the borborygmic blarings of the three-piece band. There was a ceaseless clamour of voices behind me in the big hall, a rolling heavy swell out of which there would spurt now and then, like a fish leaping, a shriek of some woman’s tipsy laughter. I had been drinking but I don’t believe I was drunk. All the same, as I talked to Polly, and looked at her—indeed, gloated on her—I had the sense of dawning illumination, of sudden epiphany, that so often comes at a certain stage on the way to drunkenness. She seemed not newly beautiful, exactly, but to radiate something I hadn’t noticed before, something that was hers, uniquely: the abundance of her, the very being of her being. This is fanciful, I know, and probably what I thought I was seeing was merely an effect brought on by the fumes of bad wine, but I’m trying to fix the essence of the moment, to isolate the spark that would ignite such a conflagration of ecstasy and pain, of mischief, damage and, yes, Marcusian anguish.

And anyway, who’s to say that what we see when we’re drunk is not reality, and the sober world a bleared phantasmagoria?

Polly is no great beauty. In saying this I am not being unchiv­alrous, I hope; it’s best to start out candid, since I aim to con­tinue that way, in so far as I am capable of candour. Of course, I found her, find her, altogether lovely. She is full-figured, biggish in the beam—picture the nicely rounded nether half of a child-sized cello—with a neat, heart-shaped face and brownish, some­what unruly hair. Her eyes are truly remarkable. They are pale grey, they seem almost translucent, and in certain lights take on a mother-of-pearl sheen. They have a slight cast, which finds an endearing echo in the slight overlap of her two pearly front teeth. She has a placid mien for the most part, but her glance can be surprisingly sharp, and her tone at times can deliver quite a sting, quite a sting. Mostly, though, she keeps a wary eye on a world she doesn’t feel entirely at ease in. She is always conscious of her lack of social polish—she’s a country lass, after all, even if her folk are shabby-grand—in comparison to my poised Glo­ria, for example, and is unsure in matters of etiquette and nice behaviour. It was very affecting to see, that night at the Clock­ers, as the evening is colloquially known, how at the start of each course she would glance quickly about the table and check which item of cutlery the rest of us were favouring before daring to pick up knife or fork or spoon for herself. Maybe that’s where love begins, not in sudden seizures of passion but in the recog­nition and simple acceptance of, of—of something or other, I don’t know what.

The Clockers is a tedious affair, and I felt a fool for coming. I had turned my back on the festive crowd and, propped on my elbows, was leaning forwards earnestly across the table so that my face, hot and throbbing, was almost in Polly’s bosom, or would almost have been had she not turned halfway away from me on her chair, so that she was looking sideways at me along the curve of her nicely plump right shoulder. What did I talk to her about, with such force and fervour? I can’t remember—not that it matters: the matter was in the tone, not the content. I could feel Gloria monitoring us, with an amused and sceptical eye. I often think Gloria married me so as always to have something to make her laugh. I don’t mean to sound resentful, not at all. Her laughter is not cruel or even hurtful. She just finds me funny, not for what I say or do but for what I am, her rufous-headed, roly-poly and, did she but know it, light-fingered manling.

Polly at this time, the time of the night at the Clockers when I fell in love with her, had been married for three or four years, and was certainly no dewy-eyed lass of the kind that might be thought susceptible to my insinuative blandishments. All the same, it was plain I was having an effect on her. Listening to me, she had taken on that vaguely staring, wide-eyed expression, accentuated by her lopsided gaze, of a married woman in whom a tentative delight is dawning as she realises, incredulously, that a man she has known for years and who is not her husband is suddenly telling her, in however roundabout and high-flown a fashion, that he has all of a sudden fallen in love with her.

Marcus was away among the dancers, whooping and stomp­ing. Despite his diffident and incurably melancholic disposition he does love a party, and joins in with violent enthusiasm at the first pop of a cork or blast on a bugle—that night he had invited Gloria no fewer than three times to jump up and join him in his capers, and on each occasion, to my considerable surprise, she had accepted. In my early days with Polly I used to try, treach­erous hound that I am, to get her to talk about Marcus, to tell me things he said and did in the privacy of their lives together, but she’s a loyal soul and let me know straight away and with impressive firmness that her husband’s peculiarities, if indeed he had any, which she wasn’t saying he had, were a forbidden topic.

How did we meet in the first place, the four of us? I think it must have been Gloria and Polly who struck up a friendship, or better say an acquaintanceship, though I seem to have known Marcus all my life, or all of his life, since I’m the older of the two of us. I recall an initial picnic in an ornamental park somewhere—bread and cheese and wine and rain—and Polly in a white sum­mer dress, bare-legged and lissom. Inevitably, I see the occasion in the light of old man Manet’s Déjeuner sur l’herbe—the earlier, smaller one—with blonde Gloria in the buff and Polly off in the background bathing her feet. Polly that day seemed hardly more than a girl, pink-cheeked and creamy, instead of the married woman that she was. Marcus was wearing a straw hat with holes in it, and Gloria was her usual glorious self, a big bright beauty shedding radiance all round her. And, my God, but my wife was magnificent that day, as indeed she always is. At thirty-five she has attained the full splendour of maturity. I think of her in terms of various metals, gold, of course, because of her hair, and silver for her skin, but there is something in her too of the opulence of brass and bronze: she has a wonderful shine to her, a stately glow. In fact, she is a Tiepolo rather than a Manet type, one of the Vene­tian master’s Cleopatras, say, or his Beatrice of Burgundy. To my luminous Gloria, Polly could hardly hold one of those little votive candles people used to pay a penny for in church and set burning in front of their favourite saint’s statue. Why then did I—? Ah, now, that’s the nub of the matter, one of the nubs, that I have worn everything down to.

The Clockers ended in the mysteriously abrupt way that such things do, and most of the people at our table had already risen and were making befuddled attempts to organise themselves for departure when Polly fairly sprang to her feet, thinking of Little Pip, I imagine—Polly’s father and her addled mother were sup­posedly minding the child—but then paused a second and did a curious, shivery little flounce, surprisedly smiling with eyebrows raised and her hands held out from her sides with the palms flat on the air, like a toddler attempting a curtsy. It may have been nothing more than the effect of her bum detaching itself from the seat of her chair—it was very hot and humid in the room—but to me it seemed that she had been lifted, suddenly, lightly, by the action of some invisible and buoyant medium: that she was, literally, and for a second, walking on air. This was hardly the result of the fervid harangue I had been subjecting her to in the absence of her husband, yet I was moved, to hot tears, almost, feeling I had somehow been allowed to share with her in this brief and secret exaltation. She took up her velvet purse, still with a trace of that faintly surprised smile—was she even blushing a little?—and made a show of looking about for Marcus, who was fetching their coats. Then I too rose, my heart fluttering and my poor knees gone to rubber.

From THE BLUE GUITAR. Used with permission of Alfred A. Knopf. Copyright © 2015 by John Banville. 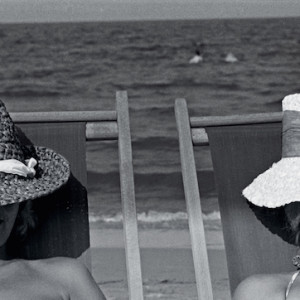 Nom de Vie: Literary Social Media in the Age of Ferrante The London Review of Books Bookshop blog has the entirety of a letter Elena Ferrante sent her press when they were preparing...
© LitHub
Back to top