I’ve walked there picking mushrooms at the edge of dread, but don’t be fooled
this isn’t a Russian poem, this is not somewhere else but here,
our country moving closer to its own truth and dread,
its own ways of making people disappear.

–Adrienne Rich, “What Kind of Times Are These”

No matter how late I was for a meeting, or how far away the cars were, I never jaywalked in Belarus. The street could be empty, but in Belarus you do not judge such things for yourself. You wait on the little green man. You walk when he gives permission.

Rebuilt after being leveled in the Second World War, the Belarusian capital Minsk is a city of wide avenues and vast squares, spaces that suggest public gatherings but rarely have them. As an American in Belarus in 2011-2012, I would stand on the curb beside fellow pedestrians, gaze across the broad and deserted road, and wait.

It was a kind of micro-play, a mini theater of the absurd on every street corner. Based on what seemed like reasonable metrics—time, distance, human agency—it would have been logical to cross the road, and yet we did not do it. As a Belarusian acquaintance put it, “You can get arrested for that shit.” In Belarus, an alternative logic directs even your minor actions. The logic of dictatorship.

Early in my time in Minsk, I noted to a close Belarusian friend how odd it was that locals seemed willing to wait for what felt like ten minutes for the pedestrian walk signal on an otherwise lifeless street. My friend nodded and proceeded to tell a story from when she was 15 years old.

She was walking her usual route to school and was late (also typical), but today, she had the peculiar urge to do something different. She decided to cut across an empty road in order to save a few seconds. She looked both ways, assessed the danger, and made her move. But my friend missed the police officer watching from the alley. One Belarusian teen didn’t make it to school that morning because she was thrown into a squad car for questioning.

Belarus is often called Europe’s last dictatorship. Alexander Lukashenko, a former collective farm boss, has been president of the post-Soviet country since 1994, and no election except for his first has been deemed free or fair. The pattern has familiar contours. Opposition candidates are jailed or disappeared, the ballots are counted or not, Lukashenko is declared the winner, protests and arrests follow.

It is surreal watching and supporting the Belarusian revolution from afar, in part because of what is happening simultaneously here in the US.

The international community condemns the human rights violations, and five years later, the cycle repeats. There is a seemingly impenetrable and fixed logic to it. After meeting a young man who had spent a month in prison for participating in the 2010 election protests, I asked him what was next.

“Nothing,” he said. “I don’t think anything will change.”

I had moved to Minsk in summer 2011 on a Fulbright grant which supported my work as an English instructor at Belarusian State University. When I arrived, it was in the aftermath of the bloody 2010 election, and the country was quietly reeling. The government crackdown had effectively eliminated the possibility of mass mobilization in the year I was there, and I recall being shocked at even the slightest inkling of dissent.

My journal from that time is filled with cryptic notes: A man wears a tiny lapel pin of the banned Belarusian flag. Viktor Tsoi’s “I Want Changes,” a Soviet-era oppositional song, is played at an underground dance party. A student writes a story about an old woman who watches all her neighbors disappear during Stalin’s purges. A musician strums a guitar in the metro; police chase him off, worried his music will incite disorder.

After leaving Belarus, I wrote a speculative essay about jaywalking in front of Lukashenko’s motorcade as an act of resistance, and then promptly shelved the piece. Perhaps I, like the young man, did not believe anything would change.

The fact that in 2011 I would devote several paragraphs in my journal to the rare and cherished sighting of a small lapel pin might give a sense as to just how unprecedented the current protest movement is. In 2020 anti-regime sentiment has grown at a rapid pace, thanks in part to Lukashenko’s inept response to the COVID-19 pandemic.

When Svetlana Tikhanovskaya, the wife of a jailed opposition leader, opted to run for president in her husband’s place, Lukashenko allowed it, because he did not believe a woman could rouse the passive public after decades of dictatorship.

This was, however, as journalist Franak Viačorka writes, a “spectacular miscalculation.” When the August 9th election results were announced with Lukashenko taking an alleged 80 percent of the vote, poll observers and voters themselves knew the numbers were impossible, in part because voters had worn white ribbons to the polls to demonstrate their support of Tikhanovskaya. Tikhanovskaya had won, and Belarusians took to the streets to protest the stolen election.

The movement to dismantle white supremacy in the US and the movement to topple the dictator in Belarus are, in many important ways, incomparable. And yet, the Internet presents them to me on the same flat plane. The police—who in both countries obscure their faces with bulky tactical gear and who surge haphazardly, like a swarm of mean bees—are indistinguishable.

The state’s response has been the most brutal yet, but rather than diminishing the protests, the movement in Belarus has swelled. Every Sunday since the election, crowds of upwards of 100,000 have marched in Minsk, carrying the banned white-red-white Belarusian flag, displayed in every imaginable form—banners, clothing, floral arrangements, face paint, street art. It is an explosion of visible dissent, an historic disruption after 26 years of authoritarianism which, from the inside, sometimes felt like an infinite loop.

Lukashenko has lost legitimacy, as even his former base and groups that tended to be apolitical are furious about the authorities’ post-election violence. When I scroll friends’ photos from the demonstrations, I barely recognize the corner of Independence Avenue and Lenin Street, the intersection near where I lived. I had never seen so many people there.

On September 23rd Alexander Lukashenko inaugurated himself in private. He kicked off his sixth term in office in an unannounced ceremony.

A few hours later, at a White House press briefing, Donald Trump was asked if he would commit to a peaceful transfer of power in November. “We’re going to have to see what happens, you know that,” Trump responded. “I’ve been complaining very strongly about the ballots, and the ballots are a disaster.” He went on, “Get rid of the ballots and you’ll have a very peaceful—there won’t be a transfer, frankly. There will be a continuation.”

Belarusians and Americans both find themselves on a precipice. Belarus is experiencing, as one friend there told me, an awakening of national consciousness. (The metaphor of “waking up” is frequently used by Belarusians to explain this year’s events.) If the logic of dictatorship once appeared seamless, it is now full of holes, points of departure.

Though I refused to jaywalk while in Minsk, my American passport afforded me the private relief of knowing I could return home when I wanted.

The US, meanwhile, has a neo-fascist leader who is openly invested in maintaining and augmenting white supremacist structures and who has said that he deserves more than two terms in office. While Belarusians attempt to claw their way out of the cruel loop, Americans are sliding squarely into its drag, where we will discover evermore affronts to our freedom. Repressions that will, no doubt, make life harder for the most vulnerable among us.

Wisdom dictates that I not draw such crude comparisons, but the parallels feel too uncanny to ignore. Like many Americans, I am having trouble sleeping, though the color palette of my nightmares is a specific one: the army green of the OMON paddy wagon; the white and red stripes of the Belarusian flag; the purple bruises, spread like berry jam up and down the bodies of protestors.

When Trump praises Chinese President Xi Jinping for abolishing term limits, saying, “He’s now president for life… I think that’s great. Maybe we’ll have to give that a shot someday,” I am thrust back to the scene of so many strangers, standing on a deserted street, waiting for no one. It is telling, I think, that one of the slogans of the 2020 Belarusian revolution is simply, Я гуляю—I am walking.

There are good reasons to resist the equivalency drawn by this juxtaposition. Belarus and the US are wildly different places. Though I refused to jaywalk while in Minsk, my American passport afforded me the private relief of knowing I could return home when I wanted.

Living in the US is not, however, a homogenous experience. As a white American, I have moved through this country with immense privilege and have not suffered the physical or psychic toll of direct racism. I recognize and mourn the fact that for Black Americans, it has never been truly safe to jaywalk.

A few days after the murder of George Floyd, two Black teenagers, a 15-year-old and a 13-year-old, were walking down North Osage Drive, a quiet residential street in Tulsa, Oklahoma that falls just within the border of the Osage Reservation. Tall grasses grew along the road, and there were no visible sidewalks. A pair of Tulsa police officers tackled and handcuffed one of the teens for jaywalking. “You guys harassing us for no reason, sir,” the second teen says right before he is also handcuffed. “We’re just walking, man.”

The logic of dictatorship—and the police state necessary to uphold it—exists here, and always has, albeit in its own uniquely American form. My Black, brown, and Indigenous compatriots, who often live on “the edge of dread,” know this well. As for the rest of us? There’s much we can learn from the Belarusian protestors. First—that it’s time to wake up.

Sonya Bilocerkowycz is the author of On Our Way Home from the Revolution: Reflections on Ukraine (2019), winner of the Gournay Prize. 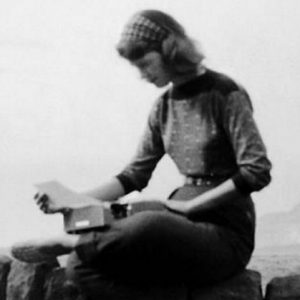 Most big Plath projects arrive with a flurry of press asking what more can be said about her. In 2013, Plath’s biographer...
© LitHub
Back to top