In Jasper Fforde’s The Constant Rabbit, residents of the United Kingdom live among human-sized anthropomorphized rabbits.

The rabbits make fine citizens—more than fine, in fact. They in live harmony with the environment (embracing sustainable practices like veganism, for instance). They have a strong sense of social responsibility. They’re also smart: the average rabbit IQ is about 20 percent higher than the average human IQ.

Yet despite their upstanding qualities, the haters keep hating.

Fforde is an accomplished satirist and uses humor to spotlight some of our ugliest impulses, including racism and xenophobia. In The Constant Rabbit, a populist party known as TwoLegsGood has parlayed leporiphobia (fear of rabbits) into a successful political movement. In control of the government, TwoLegsGood is planning to segregate the nation’s more than 1 million rabbits in a “MegaWarren” where they will be under round-the-clock surveillance and their freedoms curtailed.

TwoLegsGood’s treatment of rabbits has echoes of all caste-based and hate-filled societies, from Jim Crow to apartheid to the Nazis. “When it comes to the sort of demonizing of the minority other, there’s just so much to draw on. You don’t need to go to any specific place in the world or a specific time. You can just pick and choose from here, there, and everywhere,” Fforde says.

“The rabbits are being got rid of because they’re not human. But, of course, one of the first things that any discriminatory group will do against another group of humans will be to dehumanize them, to make them non-human. And this is often done through language. We had a politician recently in the in the U.K. who started referring to immigrants as a plague.”

The novel’s first-person human protagonist, Peter Knox, denies having animus toward rabbits—in fact, he finds himself falling in love with one—and yet he’s forced to come to terms with the fact that he, too, has played a significant role in their oppression.

“I think the book is hoping to say to people, look, you cannot look at the hate groups and say, ‘These people are the hate groups. I’m nothing like them.’ In fact, perhaps what you should be thinking is ‘Maybe I am complicit, and in what ways could I possibly be so?’”

Rob Wolf: What is the Spontaneous Anthropomorphic Event?

Jasper Fforde: How to explain? So the conceit of my book is that in a 1968, there was this event where eighteen rabbits in the U.K. suddenly became human-like. They were six foot tall, they could walk, they could talk, they had reason, they could drive cars, they like going to the cinema, eating out, all that kind of stuff. And initially everyone went, “Wow that’s fantastic, that’s amazing, welcome, celebration. How did that happen? We don’t know.”

As the years go by, suspicion changes to fear and, after that, hatred. There are now 1.2 million rabbits in the U.K., and the ruling United Kingdom anti-rabbit party, which seems to have gained power on a sort of anti-rabbit rhetoric, has decided that the rabbits need to be re-homed in Wales in one vast mega-warren as opposed to their little individual colonies.

RW: When a rabbit couple move to town, your protagonist, Peter Knox, knows the wife and mother, Connie, from university. Along with being anthropomorphized intellectually, Connie has a human, feminine figure, and Peter is quite drawn to her. There’s something kind of sexy about her.

JF: Yeah. there is. The book is clearly allegorical. By telling stories which are allegorical … you can use comedy in a big way, say some things which are quite serious. I like the idea that Connie Rabbit is very sexualized because, oddly enough, she’s based on the Cadbury’s caramel bunny which was used in the 80s to sell chocolate; it was a sort of an over-sexualized animated rabbit. It struck me as just ludicrous that you would use that to sell chocolate.

Rabbits are used a lot, actually, when it comes to advertising. We make them human-like—there’s Thumper and Roger Rabbit and Beatrix Potter—and we humanize them in this way that makes them very cute and cuddly and fun. But in reality, we have different words—we describe them as a pest, plague, and vermin, and they have to be destroyed in all manner of horrible ways. So there’s a very strange relationship we have with rabbits. And I think making Connie Rabbit into this very attractive and alluring figure was just me mucking around with this strange thing that humans do when they want to use these creatures to do specific things for them, like sell chocolate.

RW: The book is full leporiphobics—those who have a rabbit phobia or, I guess, are rabbit haters. And the haters think of rabbits as dirty and inferior. They look at rabbits the way any hate group thinks about the group it wants to turn into the “other.” Peter Knox works for the Rabbit Compliance Taskforce, yet he says “I have nothing against rabbits.” It’s as if Peter were working for the SS during the Nazi era and professing not to have any hatred of Jews. What’s going on with Peter?

JF: Peter has lots of really interesting challenges. Somebody did a review and they said that he was spineless but very pleasant, and I think that’s probably very close to who he is. He’s someone who hasn’t given a great deal of thought to what he’s actually doing. … He is utterly, utterly complicit in the evils that this regime is doing, but he does this kind of intellectual gymnastics to try and draw him away from any sense of responsibility. And I think this happens with a lot with humans. … I think the book is hoping to say to people, look, you cannot look at the hate groups and say, “These people are the hate groups. I’m nothing like them.’ In fact, perhaps what you should be thinking is “Maybe I am complicit, and in what ways could I possibly be so?” 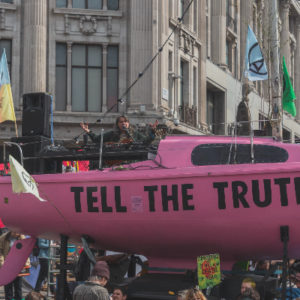 The implied answer to the titular question of All Bullshit and Lies? (Oxford University Press, 2020) is no, it’s not. In his book,...
© LitHub
Back to top