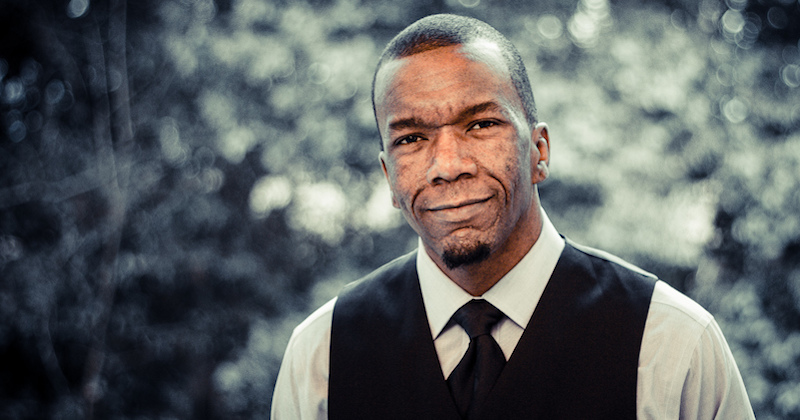 Jason Mott wants you to reconsider the “beautiful time capsule” of film noir.

Looking for a bit of writing inspiration? Have you tried turning to film noir from Hollywood’s Golden Age? In an interview with BookPage, poet and New York Times bestselling author Jason Mott discussed his new novel, Hell of a Book, and his creative process. The Returned author, a self-proclaimed “film junkie,” explained how his love of the classic genre helped shape the book’s tone and style:

“When I was writing this novel, I wanted to include my love of that genre and its use of language. Film noir is a beautiful time capsule of language. Its use of slang, its pacing and cadence—film noir treats the American English lexicon in ways that few other media have, and that fascinates me. Hell of a Book allowed me, finally, to play with language in a way that I hadn’t been able to before, which made for some of the most challenging and fun writing I’ve ever done,” he said.

Mott cited The Maltese Falcon, Double Indemnity, Night and the City, Out of the Past, and Kiss Me Deadly as some of his favorite film noirs.

Hell of a Book centers on an unnamed African American novelist who embarks on a national book tour and is accompanied by a child who may or may not be real. The book also tells the story of Soot, a young Black boy living in a rural town in the recent past. Marking a slightly different turn from his debut, Hell of a Book examines police violence, America’s legacy of white supremacy, and what it means to be a Black person in America. According to Mott, “There was a lot of meditation and catharsis in this novel. A massive amount of its creation was simply the act of me trying to figure out my thoughts on life as a Black American.”

The late Rogert Ebert defined film noir as “the most American film genre, because no society could have created a world so filled with doom, fate, fear and betrayal, unless it were essentially naive and optimistic.”

While Hell of a Book doesn’t appear to feature an assortment of hard-boiled detectives, conniving dames, and an excess of cigarettes, it seems that the narrative certainly taps into one of the genre’s basic traits: a “sociological investigation,” as Richard Brody says, a psychological character study of a protagonist attempting to navigate a corrupt world.

So, if you’re in need of a creativity boost, why not check out one of Mott’s recommendations? Personally, I’d start out with Double Indemnity. Fred MacMurray plays against type and Barbara Stanwyck’s Phyllis Dietrichson is the femme fatale blueprint.