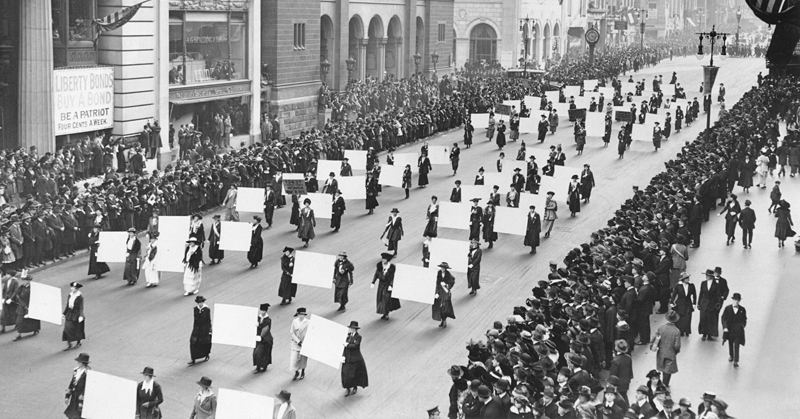 On June 13, 1908, suffragists took Jane Austen to the streets of London. The National Union of Women’s Suffrage Societies (NUWSS) held its Great Procession, a demonstration march and rally, in what would become known as a “new style.” It was ordered, majestic, and artistic. An estimated 10,000 women representing 42 organizations participated, marching across London for an hour and a half to Royal Albert Hall, where speeches were given by the movement’s high-profile leaders. The visual centerpiece of the march was “a thousand beautiful banners and bannerettes, each different, each wrought in gorgeous color and in rich material.” Most of the banners used in the march advertised place names, as thousands of women had arrived in special trains from Liverpool, Manchester, Sheffield, Leeds, Hull, Birmingham, and Bristol, with representatives from America, France, Hungary, South Africa, India, and many other countries taking part as well. A significant albeit smaller number of the banners depicted “famous woman leaders and pioneers.” It’s on one of these banners that Jane Austen’s name was blazoned.

Austen’s name and image were used prominently in the street activism, political stage, and issue-oriented fundraisers of the women’s movement’s first wave, yet you’d never know it from our histories of her legacy. Histories of Jane Austen’s critical legacy describe feminists of the 1970s and afterward with great care, but the political uses of Austen by suffragists have been almost entirely neglected in our Austen reception studies. A Virginia Woolf here, a Rebecca West there. There’s little sense given in our literary histories of Austen’s place among hundreds and thousands of Victorian and early 20th-century feminists—among an entire political movement across several continents. Putting Austen’s suffragist champions back into the conversation about her legacy is not only right and just; it also reorients our sense of how Austen has been used for political purposes. We can’t possibly understand political struggles over Austen in our own day without grasping just how long—and how loudly—debates over her and the political meanings of her writings have ranged.

Dating from the mid-19th century to the moment when women’s suffrage was achieved in many industrialized countries by the end of the 1920s, first-wave feminist activists sought female role models in history. Austen was, for those purposes, a perfect fit. Where the men’s club Janeites saw in Austen a safe, admirably domestic figure whose life and writings were often seen as without political intention, the suffragists’ Austen was almost always cast as a rebel. The more accurate phrase for the way many suffragists imagined and used her may be “demure rebel.” Amateur dramatizations of Austen drew on the tropes and ideas of the New Woman movement. Many of these dramatists were or would become suffragists. It’s no surprise that they’d bring a strong, independent-woman-loving version of Jane Austen with them, from the amateur theatricals to the streets of London. 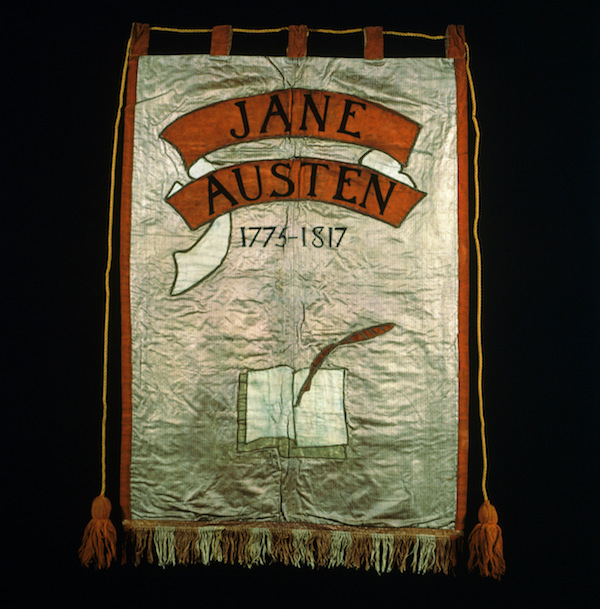 Jane Austen Suffrage Banner, 1908, by Mary Lowndes. Courtesy of the Women’s Library at the London School of Economics.

On that day in 1908, the marchers, nine out of ten of whom were female, represented “every class in society, from the highest (not Royal) to factory workers and working women of all grades, including domestic servants.” Among the professional women’s groups represented was the Women Writers’ Suffrage League (WWSL). This “very merry lot” wore signature red badges crossed with quills. Its impressive banner was designed by artist and member of the Artists’ Suffrage League, Mary Lowndes (1856-1929). The WWSL’s large banner was carried by at least three women: actress and playwright Cicely Hamilton (1872-1952), novelist and New Woman essayist Sarah Grand (1854-1943), and American actress and playwright Elizabeth Robins (1862-1952). The WWSL’s smaller bannerettes featured names from literary history, such as Maria Edgeworth, Fanny (Frances) Burney, and Mary Wollstonecraft. The stunning beige and reddish-brown banner commemorating Jane Austen featured a quill design, echoing the quills on the large banner and badges of the WWSL.

The banners used in the march were reportedly an awesome sight, creating a memorable event for participants and onlookers alike. “The striking sights of women’s suffrage activism, their spectacular actions, banners and symbols,” as a recent critic has put it, “made an immediate impression on public consciousness.” A witness reports that the crowd was “ready to scoff and jeer” but that “the flaming beauty of the procession smote them into a reverent silence.” Lowndes had designed the banners to do just that. As she wrote, poetically, “A banner is not a literary affair. . . A banner is a thing to float in the wind, to flicker in the breeze, to flirt its colors for your pleasure, to half show and half conceal a device you long to unravel.” The banners of famous women were designed to be a moving spectacle. By all accounts, they were.

The very act of carrying them was also a spectacle. It apparently involved a significant feat of strength. Holding the banners for any distance walking, particularly in the strong wind said to be blowing that day, was challenging work. “The Men’s League for Women’s Suffrage,” leader Millicent Fawcett reports, “have volunteered help in the carrying of the banners,” but the plans called for “the young stalwarts among the women” to “bear their own burdens.” Novelist May Sinclair (1863-1946) is said to have “seriously hurt herself by carrying a heavy banner for many miles in a Suffragist procession,” perhaps on this very day.

“A witness reports that the crowd was ‘ready to scoff and jeer’ but that ‘the flaming beauty of the procession smote them into a reverent silence.’”

The stakes of letting the banners drop were high. One newspaper account makes this clear: “At one point the guiding cords of a banner broke away,” and “seeing the distress of the [female] bearer,” a spectator called out, “You want a man’s help.” The woman carrying the banner is said to have replied, “No, I don’t,” as she successfully “wrestled with the intractable folds of the flapping silk” and, as the reporter puts it, “shows that she did not speak in vain.” Not everyone was impressed with such feats of female strength. As another periodical writer argues, “A woman who will walk five miles on a hot day and wave a banner all the time may be plucky, but the admirers of such pluck are not exactly deep thinkers, being, in short, persons whose intellects are of a mediocre caliber.” Not only exhibiting but just admiring female strength, for this writer, is a sign of intellectual weakness.

At the end of the march, the banners were placed carefully in Royal Albert Hall “in terraced ranks of raw and flaming color.” As reporter James Douglas put it in the Morning Leader, “The names wrought upon the delicate silk were the names of women whose power was the power of the intellect and whose strength was the strength of the soul.” The official program doesn’t reprint all of the names that were represented on banners, but it highlights several. After the banners of Vashti (called the first suffragist) and the “Three Great Queens” (Boadicea, Elizabeth, and Victoria), the next group advertised was the “Women Writers,” with Elizabeth Barrett Browning, Jane Austen, George Eliot, and the Brontës chosen as representative. Austen was prominently listed on the banners and program.

Including Austen’s name among the Great Procession’s banner honorees had everything to do with what scholars have called “an acute awareness during the period of the weight of literary history and precedent against which they were struggling. . . Significant literary and historical figures were identified and appropriated in this revisionist phase.” Austen, despite having only recently achieved the designation of “significant” to literary history and women’s history, had quickly become one of the most frequently and prominently used “great women,” chosen to serve as an “effective role model” to the women’s suffrage movement. No doubt this is because of her wide appeal, across political lines and among both men and women.

From The Making of Jane Austen. Used with permission of John Hopkins University Press. Copyright © 2017 by Devoney Looser.

Devoney Looser is Regents Professor of English at Arizona State University and the author or editor of nine books on literature by women, including The Making of Jane Austen. Her writing has appeared in The Atlantic, The New York Times, Salon, The Washington Post, and Entertainment Weekly, and she’s had the pleasure of talking about Austen on CNN. Looser, who has played roller derby as Stone Cold Jane Austen, is a Guggenheim Fellow and a National Endowment for the Humanities Public Scholar. She lives in Phoenix, Arizona, with her husband and two sons.
http://www.devoney.com 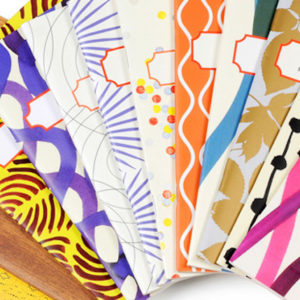 Per Diem Press received more than 1,200 submissions, from locations familiar and startling, near and far and, in one case,...
© LitHub
Back to top
Loading Comments...