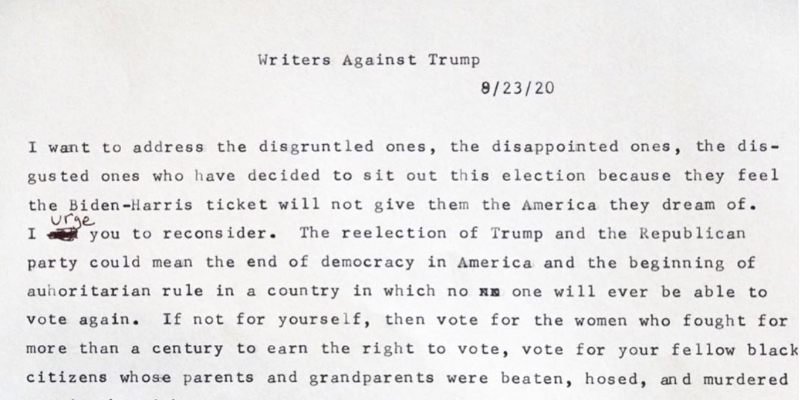 It’s Our Turn Now: Writers Against Trump on the Fight for Democracy

On this episode of The Literary Life, Diane Roberts, Todd Gitlin, and Carolyn Forché talk with Mitchell Kaplan about Writers Against Trump, and how what started in response to a crisis of language became a full-fledged movement against fascism.

Mitchell Kaplan: Why are writers so well positioned to do this and to advocate for democracy? What is it that is particularly unique to writers who should be doing this?

Todd Gitlin: That image you started with is a good place to start. Trump took over our minds. It’s like, have you ever had the problem of getting a computer fixed and you permit somebody in a tech office somewhere to invade your screen? Trump has invaded our screen. And since we’re in the thinking and word business, the production-of-meaning business, it’s been a usurpation. We’ve been colonized. So, I think Writers Against Trump is one of the great outpourings of an anti-colonial movement, in which we insist on our prerogatives to do the sorts of things that we do, which all have to do with truths.

I know there’s a whole lot about unreliable narrators and so on, but a lot of that is bullshit. Even when we read unreliable narrators, we expect to believe in the roles that we’re seeing played out from time to time. We’re acting as if they are telling the truth.

Now, it’s not just writers who are in this position. Anybody who’s in the truth business has been pulverized by this apparatus—doctors, scientists, people who believe in the legitimate powers of government. People who are serious about anything have been crushed. So, we’ve fought back. And we are one entity. I think it’s thrilling—I mean, I must say, it’s been an inspiration to me in a very dark time to know that there are significant numbers of us who not only care about the truth but are willing to devote some time to making it realized.

I like the notion that what’s at stake in this election is eros versus thanatos—it’s the life instinct versus the death instinct. And integral to the death instinct is the erasure of reality, is the erasure of even any honest attempt to find truth. We’re all kind of postmodern these days and we don’t really think the truth is right there on the surface to be found, but we sure aspire to it in our different ways. Some of what we do is our aspiration. It’s thrilling that we’re all out in the public trying to see what comes of this.

The other thing I would add is that I’m very happy that we’re going to be doing these events two days after what we used to call Election Day, because we’ve been inducted for the duration. The world is in a horrible condition—health, climate, race, injustice, you name it. I see this as part of a mobilization that I don’t expect to leave.

Mitchell Kaplan: I’m glad to hear that. And Carolyn, you, like Todd and Diane, have been activists for so long, but also, you’ve been very active in writing about things happening in Latin America. Talk about the role of the writer in other parts of the world that predates this, where the writer has been very active in the political sphere.

Carolyn Forché: Yes, well, I’ve always been inspired and moved by poets and writers who, at great peril to themselves and cost to themselves, have defied tyrants. I think about writers and poets willing to be imprisoned—some of them were killed in this process—but Nazim Hikmet, who spent half his adult life in prison in Turkey; Natalya Gorbanevskaya in former Soviet Union; Miguel Hernandez in Spain; Robert Desnos, the French Resistance poet. There are many. I put 157 of them into an anthology years ago because I was very moved by their courage, but also their sense of what the writer meant to the commons, to the people for whom they wrote.

Camus said we were at the service of those who suffer the abuses of power. We are not in the service of power. Because language is fundamental to us—this is what Todd was saying—that we were so offended by how language has been destroyed, manipulated, and distorted under this regime, this administration, I think that was our primary motivation in the beginning, to rescue the language.

And so, I thought, wait a minute. It’s our turn now. It’s our turn now in the United States. We have to speak to the party of humanity. We have to oppose this fascism. We are still in danger of being defeated and having to live under an ugly, authoritarian, fascist regime. We can’t become complacent just because the polls are with us, just because our vice presidential candidate did so well last night. These things buoy our spirits, but we have to be vigilant that this is what’s important. I’m very proud of American writers in this moment because I think they are finding within themselves the strength and the courage to stand publicly against this regime, no matter the consequences.

Carolyn Forché is an American poet, editor, translator, and activist. Her books of poetry are Blue Hour, The Angel of History, The Country Between Us, and Gathering the Tribes. In 2013, Forché received the Academy of American Poets Fellowship given for distinguished poetic achievement. In 2017, she became one of the first two poets to receive the Windham-Campbell Prize. She is a University Professor at Georgetown University. Forché lives in Maryland with her husband, the photographer Harry Mattison.

Todd Gitlin is professor of journalism and sociology and chair of the PhD program in communications at Columbia University. He lectures widely on matters relating to OWS and is the author of fourteen previous books about politics, culture, movements, and media, including the bestselling The Sixties. He was a founding member of Students for a Democratic Society and its third president.

Diane Roberts is a contributor to NPR, the Guardian, and the Oxford American, among many other publications. She is the author of three books, and her work has been anthologized in Best American Essays and Best American Food Writing. She holds a PhD from Oxford University and teaches literature and creative writing at Florida State University in Tallahassee.

Of the Ways in Which Writing is a Material Labor 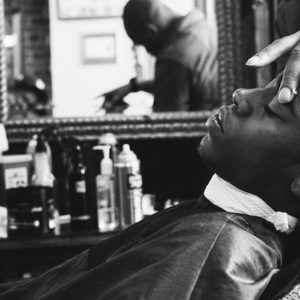 My father doesn’t like salad. Now that I think about it, I don’t know many Nigerians who actually like salad. My father...
© LitHub
Back to top