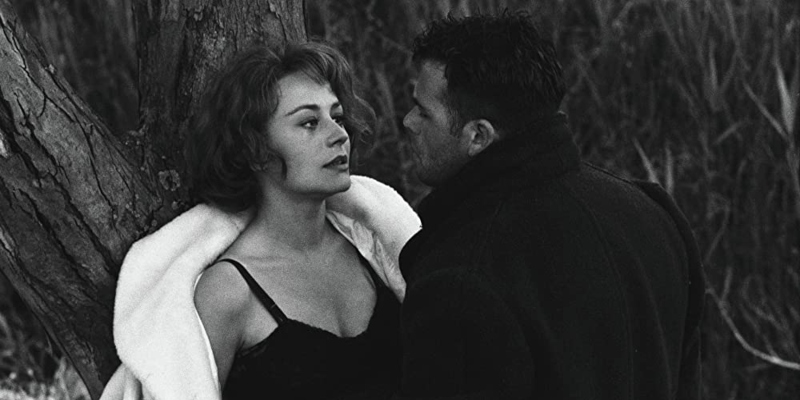 Staging Injustice: Italian Art 1880-1917, an emotional and evocative exhibition at New York’s Center for Italian Modern Art (on view through June 18th), features often unrecognized artists who dedicated their work to exposing the harsh realities of class disparity and other social issues in Italy.

To explore the relationship between the fine arts and film in Italy, CIMA is also hosting a series of film screenings connected with the exhibition, including Rocco e i suoi fratelli, a 1960 neorealist film about an impoverished Sicilian family migrating to the northern city of Milan.

Luchino Visconti’s Rocco and His Brothers is broken into five parts corresponding to each of the five brothers. The family left Sicily to avoid poverty, but the film follows the price of their success as they claw their ways out of poverty in Milan. The greatest tension in the film centers around Rocco (Alain Delon) and Simone (Renato Salvatori), both boxers and both in love with Nadia (Annie Girardot), who clash in jealousy.

Ever since I saw Rocco and His Brothers for the first time exactly a decade ago, I’ve been talking about it as one of the best movies I’ve ever seen. Yet, when I really thought about it, the only scene I could vividly remember was the horror of seeing a sex worker, Nadia, brutally raped, as if being punished.

Revisiting this film at CIMA allowed me to think about this troubling scene and dramatic film in Italy’s broader political, literary, and artistic traditions. What’s brilliant about CIMA’s unexpected pairings of film and fine art, of 1880 and 1960, is that it allows us to think about the complex ways in which cultural traditions are built across art forms and centuries.

In his introduction for Rocco at CIMA, Nelson Moe, associate professor of Italian and Film at Barnard College, emphasized how carefully composed Visconti’s frames are. Thinking about composition and Visconti’s clever use of borrowing from other art forms (paintings, novels) to comment on political oppression and social inequity, it’s worth looking at the history of Italian art and placing Visconti’s frames in that context.

Italian Renaissance art is often characterized by subliminally political religious subject matter. Jump ahead a couple centuries to the tumultuous period of Unification, the long and violent process of making a united Italian nation, and the Macchiaioli emerge in the mid-19th century, creating a new national language to express political power dynamics and to fight oppression. Their goal was to create a national artistic tradition to give Italy a sense of cultural unity. Though often characterized by sunny landscapes, some paintings more overtly tackled political concerns, such as mental health, prostitution, anti-Semitism, and criminality.

These unusual Macchiaioli paintings segue to the time period that Staging Injustice concerns: the little-known Divisionism artists who focused on social justice issues. While the Macchiaioli relied on the “blotch” (“macchia”) technique, the Divisionists painted with small lines of light and color (lines creating division). Like the Macchiaioli, Divisionism was often politically motivated, and their subjects were frequently social justice issues, such as class disparity. This visual language established by some Macchiaioli and the Divisionist artists translates well into the neorealism of 20th-century Italian film and photography, like Rocco.

The period of the exhibition saw a push for women’s rights, though that would be a road as long and difficult as the boulevards and rail lines in the dramatic, wide-angle shots of Rocco.

The only woman in CIMA’s exhibition is Adriana Bibi Fabbri, whose striking painting Madre feels more reminiscent of German Expressionism than Italian art, but its subject borrows from common Italian imagery. The agonized mother holding what looks like a dead infant is reminiscent of the Pietà (Mary holding the deceased Jesus on her lap). While Michelangelo’s Pietà is in a triangular composition, Fabbri’s painting is composed like a diamond with two diagonals pushing away from each other as if painfully rending the painting in half.

As CIMA’s historical timeline shows, the period of the exhibition saw a push for women’s rights, though that would be a road as long and difficult as the boulevards and rail lines in the dramatic, wide-angle shots of Rocco. Women play an essential role in Italian art, film, and literature, but for a long time, they were mostly excluded from making work, or their work was overlooked.

While women are frequently subjects of art, and their issues (rights, equality, criminality, sex work) are often explored through various art forms, they themselves are not necessarily the creators. I would argue that women in Italian modern art, especially marginalized or outcast women, become symbolic of nationalism and national crisis in Italy through artistic depictions of their experiences of some of Italy’s greatest social ills.

Going all the way back to the Renaissance (and even further), Catholic iconography resurfaces again and again in Italian art. And, like the Renaissance, it often has underlying political significance. In Divisionism and neorealism, we see peasants, the working class, and all those marginalized by Italian society portrayed with religious iconography, elevating their plight and their struggles. Think Fabbri’s Madre or Plinio Nomellini’s Incidente in fabbrica, which CIMA describes as a “lamentation over the dead Christ.”

This brings us to a subject tackled by the Macchiaioli, the Divisionists, and by Visconti in Rocco and His Brothers: sex work (and the broader issue of gender equality). While Rocco and his brothers are centered in the film, to me, the real star is Nadia, who enchants and, in some ways, destroys the bond of the brothers.

The film builds to Nadia’s brutal murder, which plays out in one of the most exquisitely and artistically composed scenes of the film: Nadia leans against a tree, giving herself up to Rocco’s brother Simone, and spreads her arms wide, the picture of the crucifixion, as Simone stabs her.

On this latest viewing, I paid particularly close attention to this female character who is unlike any other woman I associate with films from the 1960s. Nadia is smart, snarky, independent, beautiful, entrepreneurial, sexually enlightened, confident, willful. She’s not necessarily good, likeable, admirable, or heroic, but that’s partly what I appreciate about her: she feels like a real person. Considering her fate, however, the film does not seem to appreciate Nadia.

Ultimately, Visconti shows that Nadia’s death is needless. Though portrayed as a Christ figure, her “sacrifice” saves no one. While the ending of the film feels peaceful enough, the family is broken and divided in irreparable ways. Her death was meant to solve the family’s problems by removing the cause of jealousy between Rocco and Simone, but instead it will have ramifications that will haunt the brothers for the rest of their lives.

The crucifixion imagery suggests Nadia’s innocence, and that innocence hints to the audience that Nadia is not the real problem here, that she is as much a victim of societal injustice (economic hardship, criminal justice, sexism, and toxic masculinity) as the brothers. Intentional or not, Visconti destroys women as national symbols or allegories, in a sense. Nadia is not a Christ figure, she is not naive, she is not a sacrifice. She is a dimensional character with agency who becomes the victim of a man who would rather blame somebody else for his problems, and who can’t comprehend not getting what (or whom) he wants. She’s so much more than a symbol.

It’s hard not to fixate on Nadia’s tragic story as indicative of a much broader issue: women are portrayed as disposable, especially if they can’t be controlled.

The Macchiaioli, Divisionists, and neorealists depict polarization in a country struggling to unify and struggling against unification, a conflict that feels particularly relevant in the US today. In the midst of the imminent overturn of women’s rights through the leaked Roe v. Wade decision, it’s hard not to fixate on Nadia’s tragic story as indicative of a much broader issue: women are portrayed as disposable, especially if they can’t be controlled.

Rocco and His Brothers was influenced by a long and mostly masculine tradition: Giovanni Testori, Fyodor Dostoyevsky, Thomas Mann, and Giovanni Verga have been cited as Visconti’s literary influences, and Vittorio de Sica and Roberto Rossellini number among filmmakers cited as his peers. So, too, Rocco continues to influence a mostly masculine tradition: Martin Scorsese has named this film as one of his favorites.

When I first watched it a decade ago, it felt like a movie I was supposed to appreciate—and I still do in many ways—yet for so long I was secretly fixated on how disturbed and confused I was by Nadia’s abuse. I find myself thinking more deeply about the women, the writers, artists, actresses, who pushed to be seen and heard over the centuries.

I won’t say anything that Claire Vaye Watkins doesn’t say better in “On Pandering,” but because of films like Rocco, steeped in masculinity and masculine traditions, I have also quietly wondered why women can’t make movies like that, why women characters can’t have the same sway over generations of artists as Rocco can.

I’ve spent the past decade searching for films that I didn’t believe could exist. Recently, I’ve encountered Emma Dante’s The Macaluso Sisters (2020) and Jonas Carpignano’s A Chiara (2022), two female-centric Italian films (one written and directed by a woman with almost no male characters) that offer fresh perspectives while pulling from and pushing against old traditions, much like Fabbri’s painting of opposing forces. I’m excited to see what new traditions continue to emerge as opportunities open to people of all genders, races, and identities.

When it comes to creating broader traditions and new artistic languages, “can’t” isn’t in the vocabulary. But I’m also reminded of Joan Holloway’s (Christina Hendricks) great line from Mad Men: “If they’ve tried to make you feel you’re different from them, you are. That’s a good way to be.”

“This is Such Bullshit.” Shelly Oria and Kristen Arnett on the Reproductive Rights Crisis 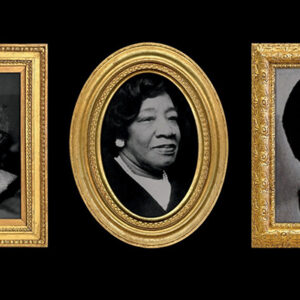