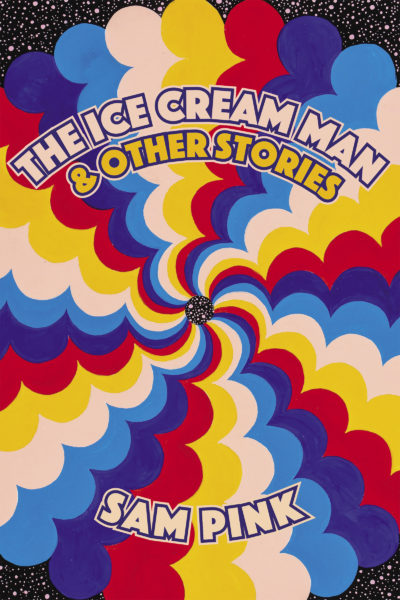 The following is a story from Sam Piink's The Ice Cream Man and and Other Stories. Pink's books include Person, The No Hellos Diet, Hurt Others, Rontel, Witch Piss, and The Garbage Times/White Ibis. His writing has been published widely in print and on the Internet and translated into other languages. He currently lives in Michigan

My friend and I were driving down US 12, dark woods on either side.

On the way to return a tent he’d borrowed from one of his coworkers.

‘I can never remember which one it is,’ he said, slowing down to check the occasional, mostly unmarked, entrance.

Mouths to long driveways that went deep into the woods.

Couple of no trespassing signs.

Drove slowly, until the headlights touched a shed.

‘Hope we don’t get shot,’ he said, turning off the car.

It was totally silent.

And then a light came on as a screen door opened, hundreds of bugs hovering above it.

‘Wuddup guys!’ yelled my friend’s coworker. Then he yelled, ‘Shut the fuck up!’ to the dogs and waved us toward the house.

Inside, the dog pack greeted us—a medium, overweight, sausage-like dog with a gray muzzle, a smaller dog, and a dog so small I thought it was a chipmunk at first.

They barked, then wagged their tails, ears going down.

My friend and I set the tent down against the wall.

Or like the contractor gave up about 65 percent of the way.

Bare plywood and nails all over.

A gigantic tree branch—as in, still part of a living tree—went through the middle of the house.

I sat in an office chair and my friend sat on a milk crate.

The overweight dog came up to me and put his greasy head in my lap—eyes red and watery, goop in the corners.

Dragon’s eyes were closing, head heavy in my lap.

‘Man, it’s a miracle he can even walk. That motherfu’er was paralyzed for four months heh. Couldn’t move at all from the neck down.’

‘Yuuup. He used to love to kill raccoons. But one time, one a them fuggers got him good n’heh. And it had some disease or some shit. He got spinal meningitis heh. This motherfu’er couldn’t move for four months. We had to baby him.’

But Dragon was dead to the world as I worked his jowls.

‘Alls he could do was lie there all day. When he barked, his entire body shook, but he couldn’t move.’

‘Innat that right, Dragon?’ said his owner, as he walked toward me.

He scooped Dragon up, one arm underneath the butt/back legs, and one around the chest.

‘He’d bark, and just be lying there, spasming on the floor n’heh.’

He kissed Dragon on the head.

‘Dude, it was nuts. We had to carry his ass outside like this for him to shit. It was a race of getting him outside, hoping he didn’t shit on your arm.’

He lowered Dragon and lifted him back up a few times.

‘Oh hey there!’ said my friend, as the dog wagged its tail at his feet.

‘Ohp, now you did it. That’s Lady. Give her any attention and she won’t leave you alone heh.’

My friend picked Lady up and put her in his lap.

She lay down immediately, wagging her tail and resting her chin on his arm.

Then she breathed out, looking off into the distance with strangely sad eyes.

Everyone watched as my friend petted the tiny dog.

And it seemed strange to me.

That this thing trusted my friend.

Knowing nothing of his intentions.

In a world of cruelty.

This little helpless thing sought security in a stranger.

Like every thing was just a smaller thing looking for a bigger thing to take care of it.

Paralyzed and helpless and needing to shit, looking to be scooped up and relieved.

‘Aw I hate to do this, Lady, but we gotta get going,’ said my friend.

He set her down and as soon as her tiny legs touched the ground and she ran up to the third dog, who’d gone to sleep.

Lady bit at the sleeping dog’s ears and its eyes popped open, lips curling back.

‘Awesome, thanks for coming by, fellas!’ said my friend’s coworker, setting Dragon down.

Dragon huffed over to police.

We said goodbye and left.

Back out into the darkness.

Sound of a distant motorcycle.

We walked back down the driveway to the car and backed out slowly.

Down the long driveway.

‘I have a feeling we’re gonna crash,’ said my friend, as we stopped by the main intersecting road, host to many fatalities.

I’d been thinking about it the whole way there.

And for a second, right then, I felt it.

I looked down the road.

On one side, only a thin bit of moonlight on the curve where the road disappeared over a hill.

On the other side just darkness.

And we backed out into the middle of the road—stopped—and began driving again.

Spared by the bigger thing, once more, maybe.

Copyright © 2020 by Sam Pink, from The Ice Cream Man & Other Stories. Excerpted by permission of Soft Skull Press. 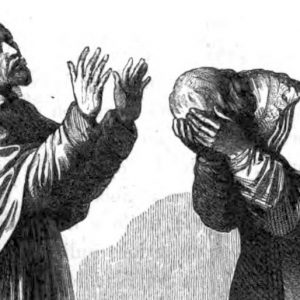 Italy's Answer to Coronavirus is a Classic Published Almost 200 Years Ago In his home in Bologna, Alessandro Armaroli has waited for the coronavirus pandemic to pass while looking for silver linings....
© LitHub
Back to top