His fingers caress what look like the colorful bindings of the Collection Hetzel. There are millions of them, like books stored on their sides along the walls of the cave in which he is buried alive. Monte Cristo, Romeo and Juliet, The King of the World, Sancho Panza, Antony and Cleopatra, Don Diègue, The Crown of Diamonds, Excalibur, The Breath of the Jaguar, products that he had imported, for their more or less affirmed place in literature, others that he had produced from scratch, Athos, Les Esseintes, Vintage Peeperkorn, Abelard and Heloise, Extraordinary Raskolnikov, Baskerville . . .

After putting so much passion and care into manufacturing French cigars that would not yield in any way to the best of those produced in the Caribbean, Arnaud is unable to digest the injustice of his failure. A diffuse resentment has his stomach in permanent knots, it’s enough to make him scream sometimes, doubled over in the depths of his lair. Now that Périgord has turned into an amusement park for tourists seeking out prehistory, it is almost impossible to imagine that France was, not so long ago, a Mecca for tobacco growing. Even so, it is still common, walking around this place, to spot at random large wooden sheds with vented sides that make them look a bit like belfries. These are the old, abandoned tobacco barns. One comes across them there, in the middle of the fields where farmers still grow a little corn and rapeseed, those remaining few who have not transformed into rough innkeepers, their farms turned into lodgings.

His grandfather had escaped this decline. His father, too, in a sense. When SEITA had refused to pay a fair price for his bundles of tobacco, Louis Méneste moved on to rapeseed so he could reach retirement and finish paying for his son’s engineering studies. The day his son was named top of his class at Epitech, Louis had called to congratulate him, then hanged himself. His wife followed him to the grave shortly after.

Having done well in school, Arnaud Méneste had accepted a generous offer from an American information security firm and emigrated to Florida, never suspecting that he would return twenty-two years later to take up the craft of his forebears.

Arnaud settled in on his ancestral lands, counting on the network of troglodytic dwellings that ran through the cliff bordering Dordogne. He had spent his childhood exploring these labyrinths, and was familiar with their every bend and curve and knew how intelligently the people who had sought refuge there in the Middle Ages had arranged them. There was always a fresh breeze blowing in the dog days of summer, as in the shaded hearts of Saharan medinas. In winter it was the reverse: the stone oozed stored-up heat, and a few embers in the hearth were enough to maintain a comfortable temperature; no one in human memory had ever caught the slightest whiff of mildew. As he had foreseen, these grottos turned out to be perfect for drying tobacco leaves. Hung from the ceiling on hooks, the plants browned without rotting, all the while keeping the suppleness required for the shaping process. The perfect humidity. Even the Dominican workers he brought over at a steep price to make up his staff were astonished. He set up the factory at the top of the cliff, just a hundred meters from the caves; it was a huge, rectangular stone building in the style of the region’s farmhouses, now marred by its new owners’ additions.

My god, what a shame . . . He has to stop thinking about all that, he tells himself, going into another room. This is an alcove with rounded corners and high ceilings, at the center of which stands a very simple canopy bed made of exotic wood. One of the few desires that Dulcie allowed herself to voice in all the time he has known her. She is lying perfectly still in a white cotton nightgown that belonged to her grandmother. Dulcie Présage . . . When she had first introduced herself, at the Dominican tobacco company he was visiting, Arnaud had been captivated by her name as much as by her beauty. An island girl with big lips and a limpid smile. Eyes the color of jatoba wood, though she has not opened them in six months. The feeding tube in her left nostril looks like one of the nose pins that Rajasthani women wear, it traces a smooth curve over her cheek up to her ear. She is sweating a little. Her pores glimmer slightly on her ashen skin, distant stars in the night sky. He runs a sponge over her, feeling like he is brushing off a chalkboard.

Dulcie is Haitian, but she worked as a torcedora for Don Esteban in Santiago de los Caballeros. A great opportunity. Her maternal great- uncle, Yvrose Beaubrun, a schoolteacher in Port-au-Prince, had gone into exile in the Dominican Republic in the twenties. There, he had freelanced for the daily El Caribe before being recruited to be a reader at La Aurora tobacco factory, where he officiated for fifty-nine years. The hurricane that hit the island in 1975 only killed eighty people, but among those unfortunates was Marie-Frumence, Dulcie’s mother, a hundred-gourde hooker in the suburbs of Jacmel. The kid was only five at the time; some kind souls took it upon themselves to bring her to Santiago, to the last known member of her family. Yvrose took her in unquestioningly. He brought her to the factory during the day and taught her in the evenings. By watching the workers, then imitating them, Dulcie learned to select the leaves, trim them, distinguish the parts of the plant that should make up the filler, the binder, and the wrapper. Recipes for assemblage and fermentation; a knack for cutting and rolling; the necessary balance between the ligero (the leaves from the top of the plant, the cigar’s power), the seco (the middle leaves, the aroma), and the volado (the bottom part, the burning); techniques for germinating seeds and transplanting them into the field, then cultivating them indoors; no part of the long process that leads to an excellent cigar escaped her.

By listening to Yvrose day after day, she acquired an almost unhealthy taste for novels. Seated at the foot of the reading platform where he ensconced himself—the atalaya, the “watchtower,” the “sentinel”—she took in Les Misérables as one might receive a sacred text. Then Monte Cristo in the same way, Robinson Crusoe, Don Quixote, Anna Karenina, Moby-Dick, Twenty Thousand Leagues Under the Sea. Popular fiction alternated with works of great literature, edifying biographies with history books. Lope de Vega, Dante, Shakespeare, the lives of Thomas Edison, Benjamin Franklin, Bernard Palissy, the six volumes of Álvaro Flórez Estrada’s Elements of Political Economy, Michelet’s History of the French Revolution, Montesquieu’s The Spirit of the Laws and Persian Letters . . . The other women cried as they worked, made comments while on break, then forgot what they had felt so fiercely during the reading. This was a natural phenomenon, and, if we can be honest for a moment, one that concerns us all: what remains in our memories but a blurred, dusty summary of those books that once turned our worlds upside down? Dulcie, however, remembered everything.

“The blood of a jeli runs in your veins,” Yvrose Beaubrun told her one day admiringly, when she was reciting the actions of Edmond Dantès with the graceful ease of a griot.

Upon her great-uncle’s death, she became the top roller at Don Esteban. When Arnaud met her, and they recognized each other as two halves of the same fruit, finally reunited, the young woman had an intellectual background and a political awareness that far outstripped his. It was she who passed on to him her love of books and initiated him into the complex delights of the cigar, and she who helped him come to understand his own father’s attachment to tobacco growing. Ten years after their marriage and their move to Florida, it was for her that he sold his business and returned to Périgord. He replowed and resowed the fields of his childhood, tripled the size of the barn to make it a model workshop; at Dulcie’s urging, he hired two experienced Dominican rollers to teach the women he recruited locally. At the end of the year, Casa Beaubrun began to produce the first French cigars: a Jean Valjean with a brown cap, which burned in several modules; a simple corona Rastignac; and a Salammbô with mild Creole notes. Several reviews from specialists hailed the company’s birth without concealing their misgivings about its future. Put to the test by the top experts, Casa Beaubrun’s cigars were found comparable to Havana’s best, worthy of representing luxury “à la française.”

Smokers, however, balked at the idea of a product that was missing one of the subconscious factors that gave them pleasure: exoticism. Although Dulcie and the forty women she supervised were producing three thousand cigars a day, Arnaud never managed to sell more than a fifth of them. At this stage, it was necessary to find investors so they could promote their brand and continue to operate. Paying for distribution rights in airport duty-free shops was the keystone to their marketing strategy, but the cost was prohibitive. Adding to their expenditures, they leased more farmland to increase their yield, with the objective of minimizing the amount of tobacco they would have to import. This endeavor was starting to pay off when the price of tobacco jumped yet again, more than ever before, thwarting their efforts; that same autumn, a storm devastated Périgord and reduced them to nothing: sales dropped, banks pulled their support. At the beginning of the third year, Arnaud called his workers together and announced the factory’s liquidation. A Chinese buyer was proposing to turn the facilities into a “hub for information technology production.”

He swore to retain all the employees, provided they took a pay cut and expedited the factory’s conversion into an e-reader assembly plant. Once alone with Dulcie, Arnaud Méneste was resolved to tell her the whole truth: the Chinese group was buying Casa Beaubrun at a price that would not allow him to pay his debts; as he alone was liable for the company, even his lands were to be swallowed up by his bankruptcy.

“We’ve lost everything,” he had told her, taking her in his arms.

She gave a strange moan and went limp; in the moment he thought that she was voicing her pain in some bizarre manner, that this was how they cried over in the Caribbean. A stroke, the medic announced, we have to take her to the hospital.

She has not come out of her coma since that terrible moment.

It only took two weeks for him to get her out of the hospital in Sarlat and bring her home with him.

In his caves, besides the cigars he managed to save, he has hundreds of journals, from his father and his grandfather, who could never separate themselves from the written word. Books, too: Great-Uncle Yvrose’s Spanish library, and all that Dulcie bought later. Day after day, he draws strength from them to invent the next part of the story that he will read the following day to the employees of B@bil Books.

He is just a voice, a tenuous bridge between two shores.

Playing the "Bigly" Game: On Poverty and Shame in America 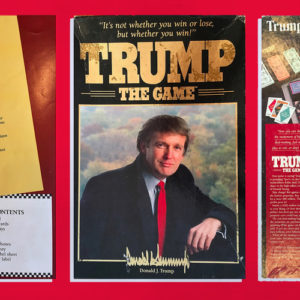 Playing the "Bigly" Game: On Poverty and Shame in America It’s funny to me that I can remember Donald Trump so clearly in the 1980s. I was just a kid, but I can. He was like a Swatch...
© LitHub
Back to top