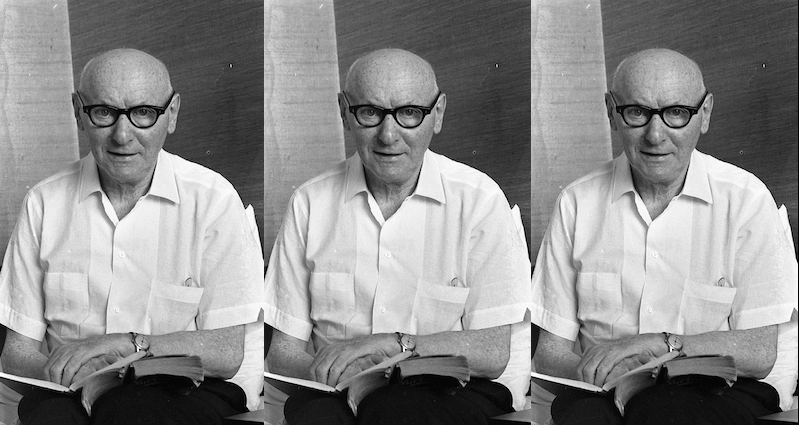 Feature photo by Dan Hadani, used with permission of The Singer Literary Trust.

Singer often feels like a familiar entity—yet he never ceases to surprise. As discussed in this companion essay, he is known as a storyteller and memoirist, but only cursorily as a literary critic. Yet he published tens, if not hundreds, of articles on art and literature, including reviews of books and plays, under several pseudonyms, and sometimes anonymously too. As anyone who has spent some time with Singer knows, there’s always something new to discover.

The date of Singer’s birth has long been a point of contention among scholars, with most giving it as July 14, 1904, which was the day Singer celebrated in his lifetime, and others using the date more recently proposed by German scholar Stephen Tree, November 21, 1902. But historical research suggests the question is considerably more complicated. On his entry into the United States on May 1, 1935, his age was reported as 30; on his entry into the United States from Canada on June 2, 1937, he gave his age as 32; on the United States Census, taken on April 13, 1940, he gave his age at last birthday as 35. Singer himself, when he did record his date of birth, always noted 1904, but not always the same date. On his author’s questionnaire for Knopf, filled out in 1950, he gave his birthday as July 27, 1904. In the U.S. Public Records Index, 1950–1993, he appears with the most-known birthdate, July 14, 1904. None of this gives much clarity—though it accords with the most often-cited sources.

Other sources, though, complicate the picture. In Of a World that is No More (1946), a memoir written by his older brother Israel Joshua, Singer is referenced as already being in a cradle during the Jewish year of 5665, which corresponds to 1904–1905, and, more importantly, is also described as being an infant before Theodor Herzl’s death—which occurred on July 3, 1904. And Singer was himself aware of the contradiction, telling Paul Kresh he had two birthdays, one in July, which is the one he uses officially, and one in November, which he said corresponded to the Hebrew month of Heshvan. Devorah Telushkin also reports his birthday in November, and in The New York Times, he tells Rabbi William Berkowitz that his “real birthday is in Cheshvan, on a Wednesday during the third week” (“New York Day by Day,” September 3, 1984). Stephen Tree suggests he was born in 1902 because, in that year, the 21st of Heshvan falls on November 21 on the Gregorian calendar—but during that time Poland was part of the Russian Empire, which followed the Julian calendar, which would make the date November 8. Also, Tree’s proposed date falls on a Friday, a Sabbath eve, not a Wednesday, as Singer reports.

The only other option is the one not yet considered—1903—which corresponds to the Jewish year of 5664. The third Wednesday of Heshvan that year falls on November 11, which conforms with his brother’s portrayal of Singer as being an infant in July 1904 and in a cradle in the year 1904–’05. It is most plausible, then, that his birthdate is indeed November 11, 1903—give or take about a week.

This piece first appeared in BLARB and is reprinted with permission of The Singer Literary Trust.