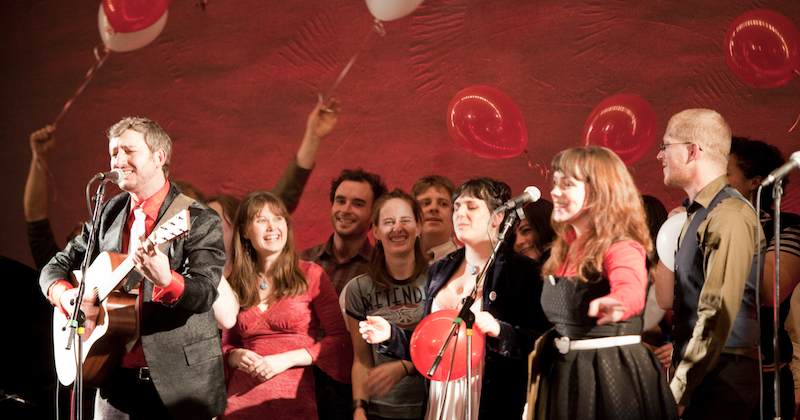 Is this the best book club ever?

Here’s some Thursday joy—and inspiration for your vaccinated group hangs. Unlike many book clubs, which involve a lot of sitting and not much excitement, every month the Bushwick Book Club gathers to present original work—mostly songs, but sometimes poems, meals and cocktails—based on the book they read.

The club, founded by writer and musician Susan Hwang, has been going strong for twelve years. They’ve covered Angelou to Nabokov to Shakespeare, and, while they often meet at one of the members’ apartments, have held their book clubs at venues like Barbes, the Slipper Room, and Dixon Place. The book club’s reputation now precedes it; sometimes, the authors themselves stop by to see the results, including Jeff VanderMeer, Téa Obreht, and Chuck Palahniuk, who said that the Bushwick Book Club (BBC?) “looks to the future of literary events.”

It’s a tall order to create work for such a specific assignment on a deadline—said Hwang to AMNY, “We’ve had some people write the song on the train to the venue.” But it just makes explicit the ongoing process of artistic inspiration, and the showcases are always an outpouring of joy. And what better way to honor a piece of writing than with your own?

You can listen to many of the Bushwick Book Club’s songs on their Bandcamp page, and listen to their podcast—which features excerpts from their live shows, plus interviews with authors and songwriters—here.