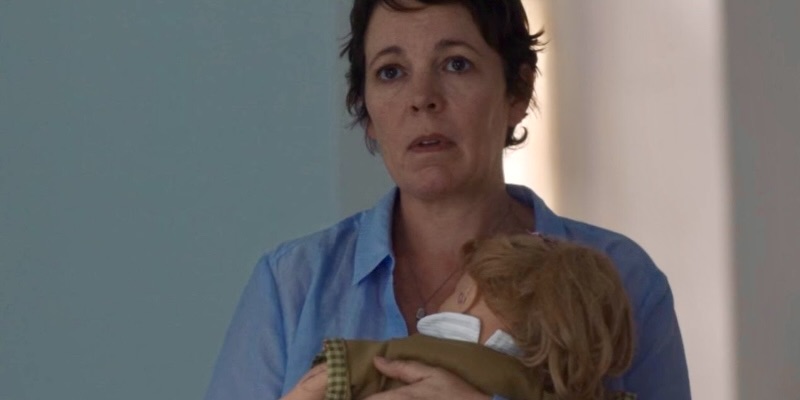 Is The Lost Daughter
a Horror Film?

“When Is a Horror Movie Not a Horror Movie?” asked The New York Times in a November headline. Recent films like The Humans, Spencer, and The Lost Daughter have been spooking the masses without assists from ghouls, ghosts, and goblins, without fast zombies or slow ones. Writer Eric Piepenburg characterizes the genre as “elastic and regenerative,” and makes the case that you’d be hard-pressed to name a horror movie that doesn’t meddle with other formulas. Given the piece’s overall stance, a more apt title might have reversed the question: “When is a non-horror movie a horror movie?”

I’d argue that the films included in the Times’ roundup earn admittance by the same token as Scream did in 1996, through its banter with the slasher film and its willingness to pull from the same bag of tricks. In other words, through its committed engagement with the genre. Scream’s horror-savvy protagonists enumerate its slasher tropes like they’re part of a Survival 101 study group. It’s a horror movie because its characters tell us so.

Perhaps capturing a maturation of Scream’s technique, films like those name-checked by the Times aren’t as forthcoming in announcing themselves. They converse with horror subgenres without poking fun of them, or the ordinary fears that sustain them. Both The Humans (2021) and The Nest (2020) are set in creaky old dwelling spaces with weeping walls, flickering lights, and doors and windows wont to slam in the middle of the night—but decrepitude isn’t a symbol so much as a sign of cash-strapped neglect in these stories, both of which are slow-burn portrayals of families on the brink of financial ruin. This constitutes a reversal of the ordinary haunted house formula, wherein “real” hauntings symbolize prosaic fears and cannily foreground the anxiety that homeownership (or lack thereof) can stoke, especially in a post-2008 economy.

The horror lineage of The Lost Daughter—an adaptation of Elena Ferrante’s novel of the same name, and Maggie Gyllenhaal’s directorial debut—isn’t as obvious. In the film, Leda (Olivia Colman), a Harvard professor and empty nester, is roused from an idyllic vacation in Greece by a rowdy clan from Queens. When a beguiling young mother, Nina (Dakota Johnson), loses sight of her daughter on the beach, Leda finds and returns the girl, but not without taking a commission: the child’s beloved baby doll. For the rest of the film, Leda alternately dotes upon the doll like it’s a real child and neglects it like a real child would do.

The case for The Lost Daughter as a horror film rests on Nani the doll, and could even be made from a single image of her. Several days into the doll’s captivity, Leda probes Nani’s half-open mouth with a pair of tweezers and startles something inside that begins to wriggle. She drops the doll and watches in horror as an ooze erupts from its mouth and takes an elongated, serpentine shape. Naked, filthy, and lying prone with a meaty worm slithering from her mouth, Nani is a dreadful sight to behold, unequivocally a Creepy Doll.

In Ferrante’s novel, the sequence plays out differently: “I have a horror of crawling things, but for that clot of humors I felt a naked pity,” Leda says of the worm. Gyllenhaal has said that she made The Lost Daughter from horror blueprints, and her flourish in this scene seems to indicate the subgenre from which she borrowed most heavily.

Horror films of the Creepy Doll variety can be difficult to regard as anything other than camp. How else can we process the optics of grown adults doing battle with baby-sized foes? Were this standard horror fare, Nani would undoubtedly (if improbably) pose a physical threat. But like other new meta horror films, The Lost Daughter never strays to a universe outside our own, nor attempts to imbue the child’s toy with anything resembling sentience. Gyllenhaal’s portrayal drives home the somber reality that the story’s bugaboo is as harmless—and defenseless—as an actual baby.

Naked, filthy, and lying prone with a meaty worm slithering from her mouth, Nani is a dreadful sight to behold, unequivocally a Creepy Doll.

Beyond heightening stakes with scare tactics, tapping into the Creepy Doll subgenre gives Gyllenhaal access to its toolkit, its symbols and tropes—not to mention the heft of its legacy. To examine those fears at the root, we must turn to an OG demonic doll: The Twilight Zone’s Talky Tina.

A (surprisingly) recent article from Child and Adolescent Health provides context and commentary on “childism” (defined here as “prejudice against children”) in the 1963 episode “Living Doll.” Authors Thomas and Martin begin their analysis with a statement of intention that could just as well apply to The Lost Daughter: “It may be too distressing to confront head-on the reasons behind the mistreatment of children,” they write. “Fiction and storytelling might offer a means of grappling with childism, depicting the underlying psychosocial conflicts in terms both digestible and palatable.”

In “Living Doll,” little Christie’s prized new baby doll, the audio-equipped Talky Tina, butts heads with Christie’s stepdad from the moment she arrives home. “Will you shut that thing off?” he shouts at his stepdaughter, mid-argument with his wife. When the child runs upstairs in tears, Talky Tina turns to the man and says, uncharacteristically, “My name is Talky Tina, and I don’t think I like you very much.” He hurls her across the room.

The adversarial situation escalates to Christie’s stepfather putting Tina’s head in a grip and attempting to saw it off with a power tool. But in the end, Tina wins by tripping Christie’s stepdad on a staircase, causing him to fall to his death. “I’m Talking Tina, and you better be nice to me,” she says in her first address to Christie’s newly widowed mom, staking her claim as the child’s ultimate protectorate.

In their analysis, Thomas and Martin note that Christie and Tina are both nicknames for Christina, and that the episode was timely: just two years prior, a landmark study had introduced the world to the concept of “battered child syndrome.” “Conversations about violence against children were just entering the mainstream,” Thomas and Martin offer as context for the episode. “Using a doll in place of a child softens the blow.”

In The Art of Cruelty, Maggie Nelson conducts her own inquiry into the representational use of dolls in art but arrives at the opposite conclusion. In the chapter “They’re Only Dolls,” she grapples with artist Mike McCarthy’s Family Tyranny, a short video that attempts to portray the intergenerational effects of sexual abuse through the power of suggestion. Nelson marvels at McCarthy’s ability to impress upon the audience a feeling of having witnessed a brutal assault, when in fact all we “see” is a faceless father figure pouring mayonnaise into a Styrofoam ball (crudely made to resemble a head) and jamming a broom handle into a bucket. “‘Don’t worry, they’ll remember it,’ he coos throughout … as if the point of the violation lay less in the momentary discharge of psychosexual energies and more in the abuser’s capacity to leave a debilitating psychic scar,” Nelson writes. The chapter’s title is a quote from Arthur Danto: “They’re only dolls” helps as much as ‘It’s only art,’” he said in response to McCarthy’s work.

Much more pernicious is the lack of forgiveness we extend to young mothers.

In flashbacks, Leda is revealed as a short-tempered and petulant mother, too often seeming to dole out punishment in anger. She abandons her family for a period of three years, during which she carries on with life as if they never existed. This mistreatment pales in comparison to the type of abuse that supports Nelson’s claim, yet Nelson’s assessment of McCarthy’s ability to “leave a debilitating psychic scar” through representation offers insight into The Lost Daughter’s power to unsettle. In the film’s most explicit instance of doll violence, an enraged Leda throws her own childhood doll over a balcony when her daughter rejects it as a gift. Her behavior is both unimaginable and—judging by the reception of the film as one that “Understands the Secret Shame of Motherhood” (The Atlantic) and expresses “The Perpetual Rage of Motherhood” (The Cut)—nearly universal.

At the story’s climax, Leda presents Nina with the doll, and Nina demands to know why she stole it. In Ferrante’s novel, Leda replies, “I don’t know.” But in Gyllenhaal’s film, she responds with a much more telling non-answer: “I was only playing,” she says timidly. The excuse betrays Leda’s jumbled state of mind and throws her actions in flashback into relief. In observing Nina and her daughter and reminiscing on her own young motherhood, Leda was also revisiting a time marked by regression. Her behavior toward her children then, and toward Nina and her daughter now, isn’t so much cruel as it is childlike. A scene wherein young Leda seemed dangerously close to returning her daughter’s playful slaps with her own angry ones resembles a hitting match between two toddlers testing each other’s boundaries more so than physical abuse. In the pivotal moment of her walkout, meanwhile, Leda comes across as wandering and distracted, drawn to glimpses of a shiny alternate reality rather than determined to abandon her family.

Ferrante’s novel puts an even finer point on this regression. Toward the end of the book, Leda measures and weighs herself and is alarmed to learn she’s lost pounds and inches. “Among my most dreaded fantasies was the idea that I could get smaller, go back to being an adolescent, child, condemned to relive those phases of my life,” she confesses.

The Lost Daughter’s copious flashbacks demonstrate how Leda responded to her children’s thoughtlessness in-kind. If her behavior is cruel, Ferrante’s book and Gyllenhaal’s film suggest, it’s because children are cruel. Much more pernicious is the lack of forgiveness we extend to young mothers, whom we expect to mature naturally and completely through the experience of being isolated with tiny humans.

In the conclusion of their assessment of Talky Tina, Thomas and Martin (somewhat bleakly) convey the urgency of the 60-year-old series’ message, concluding that the episode “…implicate[s] us as adult viewers in this prejudice against children, whether in the form of direct mistreatment or rigid social roles. The anxieties of adults become the trauma of children, which in turn becomes their anxieties as adults, and the cycle continues,” they write. “But fiction’s power also lies in imagining—even demanding—other ways of being.”

In the New York Times piece, film professor (and, incidentally, author of The Revolting Child in Horror Cinema) Andrew Scahill claims that evolution is indeed the genre’s raison d’etre: “Horror forces itself to keep innovating,” he says.

New meta (nü-meta?) horror films like The Lost Daughter refuse us the comfort of familiar scare tactics. Instead of a knife-wielding baby doll, we have a child’s beloved plaything—forcing us to consider why, as storytellers, we might ever make it murderous in the first place. Unmasking the genre leaves us with the frightening prospect that there’s an element of wish-fulfillment in Creepy Doll movies, in seeing oblique representations of violence against children. At the same time, it exposes the underlying fear that stems from the thought of catching a glimpse of oneself in the mirror, doing battle with a baby-sized foe.

As a form of group exposure therapy, these films assure us that our darkest impulses are anything but extraordinary, and prime us to reckon with the banal, systemic evils that truly grip us, preventing us from imagining other ways of being.

Elizabeth Horkley is a freelance author specializing in film history and criticism. Her byline has appeared in Hyperallergic, Los Angeles Review of Books, Screen Slate, The Atlantic, and The Baffler. 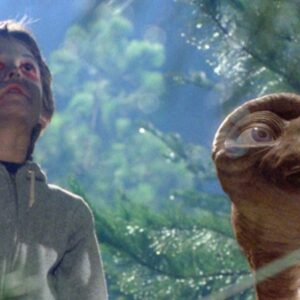 Aliens are out there. Just not in the way we might think. While we haven’t yet proven the existence of aliens, scientists...
© LitHub
Back to top