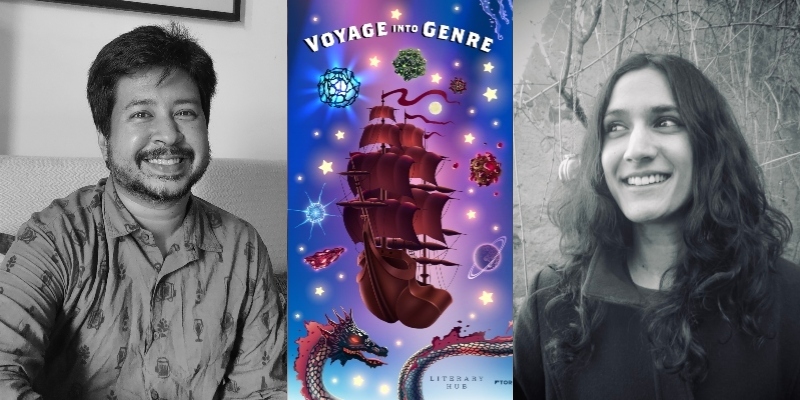 Is Technology… Bad? Samit Basu and Joma West on the Anxieties of Our Era

This episode, which you’re listening to on some piece of advanced technology, might as well be called “Is Technology… Bad?”

So strap on your shiny sunglasses: we’re headed to near-future Delhi, an upscale apartment block where no one touches one another, and then right back here to this most pivotal moment for humanity.

Samit Basu (The City Inside) talks about being told your book is a dystopia when you didn’t write it that way, updating a near-future story to include the reality of 2020 and 2021, and what it means to be on social media in the age of scripted reality.

Joma West (Face) shares how a conversation with a friend prompted the short story that became Face, how the ethics of technological child-rearing can be made even scarier with some language choices, and why she structured her novel in overlapping points-of-view.

Douglas Rushkoff (Survival of the Richest) offers some thoughts about how ordinary people can retake control of the technology that’s meant to help us instead of letting the uber-rich exploit both it and us.

Samit Basu on trying to keep up with technology and identifying with the grown-ups in your novel:

Drew Broussard: It makes me think about the comedic angles of the book. Joey’s parents are both sort of horrifyingly clueless in a way that I look at certain members of a similar or slightly older generation here in the States, but there’s also something so understandable about the ways in which the world changed so fast and that they are the ones responsible for it.

Relatively early on in the book, there are a couple of moments where you highlight “yeah, of course everybody shared all of their data. Of course we did all of these things.” And the ways in which at a certain point generationally—and I think this does happen for every generation—they just stop being able to keep up. I mean, I’m 33 and I feel that way about TikTok. I can only imagine how my parents feel about most social media.

Samit Basu: I’m a bit older than you so it wasn’t TikTok for me. It was Snapchat. I think everybody has that one app that is their wall. I was nervously, very tenuously trying to build a relationship with Instagram, and then Snapchat came and I wasn’t physically able to use the app, which sometimes happens for slightly older people as well, but it’s just that I didn’t understand what it wanted of me. And then TikTok came, and TikTok used to be huge in India—TikTok was very interesting in India in the sense that it removed the barriers that were social. And a lot of people who were in rural areas in India started using TikTok to express themselves. So then of course, TikTok got banned in India, which is why I cannot be part of the frightening but fascinating phenomenon that is BookTok.

But yeah, as far as Joey’s parents are concerned, for the first time I was doing a novel where I identified most with the parents of the lead character because they are my generation in the future, and they’re getting stuck in this thing where we were promised one country and we got another one, and we don’t know how to deal with it, and we refuse to change beyond a point. Even if that puts us in physical danger. I see that sometimes when my elderly relatives even now suddenly decide they will let Facebook know how they feel. That’s never a good idea. And then running to turn off the modems—it’s a new experience. I think previous generations have not had this experience.

*
Joma West on being afraid of—and coming to terms with—technology:

Joma West: There was more of a fear of technology for me when I started writing it. I was a bit of a self-imposed luddite for a while. I mean, I was using computers and stuff, but I didn’t get a smartphone for many years. I didn’t even get a mobile phone for many years after all my friends had got them, and there was something that I found slightly appalling about that. That’s probably just from imbibing way too much sci-fi as a kid where you’re thinking, no, I don’t want that future! Let’s not!  So I think there was a certain wariness and suspicion, but that’s definitely disappeared for me. It’s definitely something that I don’t see as so plausible now, but at the time that I was writing it, I thought there was some element of plausibility to where things might go, if pushed in a certain direction, a little bit more that way.

Drew Broussard: What changed? Do you know? Or was it just sort of a vibe shift?

Joma West: I think it was a vibe shift in general. I think during the pandemic, during lockdowns and things like that, our reliance on technology really became a lifeline rather than something to be frightened of. I mean, there’s still elements that freak me out about it. I don’t particularly like the way that Amazon’s taking over everything and you’ve got your Alexa and things like that sitting there listening. My phone’s probably listening to me right now. Targeted ads and everything, it’s kind of grotesque. But I think that that’s less a tech problem and more a capitalism problem.

*
Douglas Rushkoff on how to better think about the relationship between technology and people:

Douglas Rushkoff: We have to be extra conscious and think about, am I deploying this technology, this Uber or Amazon or Airbnb or an algorithm, in order to get someone to do something or help someone to do something? And there’s a real, real difference. I think about technology in terms of what does someone want to accomplish and is this gonna help that person do that? How do we help? How do we build technologies that people use rather than build technologies that use people.

What Should We Be Celebrating on International Day of the World’s Indigenous Peoples?

What Should We Be Celebrating on International Day of the World’s Indigenous Peoples?