Is Hillary Clinton a Modern-Day Cleopatra?

Or, How We Systematically Tear Down Our Female Leaders

From her first appearance in national politics, Hillary Clinton was pilloried by mainstream and fringe sources alike. By the time she was running for president, accusations of corruption had flowered into absurd rumors of body doubles, lesbian affairs and child sex rings. And yet, just a few months after the inauguration, she’s vanished from the narrative—even at the Women’s March in DC, her name scarcely came up. In part, this absence is voluntary. But it’s also because she—and her so-called “identity politics”—have been so quickly blamed for Trump’s ascent. Watching the narrative emerge around Hillary’s collapse, I found myself thinking of another female politician whose image was torn down by her opponents: Cleopatra. The savviest female ruler of the ancient world reduced to a drunken knockout in the popular imagination—and the subject of my first two novels.

The comparison feels counterintuitive. After all, our common perceptions of the two place them on opposite ends of the crone-seductress spectrum. But that has more to do with the way we are primed to evaluate female public figures than the figures themselves. With women, we must always choose: Slut or prude, Madonna or whore, hot or “disgusting.” When you set a photograph of young Hillary side-by-side with one of the historic Cleopatra, you’d be hard-pressed to pick which would become the beauty icon. But that’s precisely the point: our ideas of famous women are always shaped more by propaganda rather than any “objective” truth.

Both Hillary and Cleopatra rose to prominence as appendages of more famous men. In Hillary’s case, she became a household name when Bill ran for president (her own work as a lawyer and professor was immediately eclipsed). Cleopatra secured her place in history when she met Julius Caesar. At 21, the Egyptian queen had already showed a great deal of ambition (so much so, in fact, that she was engaged in a civil war over control of the Ptolemaic kingdom), but that’s not part of the story that endures. Instead, we hear of Cleopatra as she unfurls from a carpet and “capture[s] the old man with magic” (as Lucan put it). Even in this capturing, her influence is truncated. What we remember—to the extent we remember anything it all—is how Caesar went to Egypt and was “bewitched” into restoring Cleopatra to the throne. Even though Cleopatra was likely visiting Caesar in Rome on those infamous Ides of March, her presence there is usually left unmentioned.

The reason for this elision of Cleopatra from Caesar’s story is simple. Caesar’s heirs (namely Octavian) were eager to preserve the great man’s legacy. And so, to the extent she’s permitted into Caesar’s narrative, it is only as the stooge for his failings. Cleopatra is blamed for tempting Caesar toward despotism, but rarely credited for introducing him to the scientific achievements of the Egyptians (the modern solar calendar, for instance). Hillary’s reputation faired little better under Bill’s presidency—she was cast as the conniving puppeteer behind the proverbial throne or the long-suffering wife who’d sacrificed both personal and political principle for her husband. Either way, the message is clear: A woman in proximity to power must be an evil manipulator or else a martyr at the altar of male ambition. But what is most worrisome about these stories is how easily they are accepted. Not just by red-meat Trump supporters or insufferable Bernie bros. But by dyed-in-the-wool feminists. Even me.

Though I found myself knocking on doors for Hillary, I hadn’t always been a fan. I voted for Barack Obama in the 2008 primary, and I was drawn to Bernie’s unsullied progressivism this past election cycle. Clinton was old news. I didn’t like “dynastic politics.” I eschewed her penchant for compromise. But these very qualities—experience, cooperation, connections—are the ones that allowed her to rise high despite her gender. Truth be told, Cleopatra irked me for many of the same reasons. She, too, was the product of a political dynasty. Celebrated as a lover and a beauty, she wasn’t the norm-busting warrior I would have chosen. And so, I settled on a different protagonist for my series: Cleopatra’s younger sister Arsinoe, who also vied for rule. Unsullied by liaisons with Rome, and—in what is surely no coincidence—defeated in oblivion.

Defeat, of course, is the fate that typically meets ambitious women—even the ones we deign to remember. Cleopatra is far better known for her liaison with Antony than her one with Caesar. After all, despite her “insolence” (Cicero’s word), she survived that first Roman affair unscathed—Caesar was the one who ended up dead. With Antony, in the pair’s ill-fated stand against Octavian, the Egyptian woman—“not even a Roman” (Lucan)—gets her comeuppance. And so it is this manipulative Cleopatra who goads Antony into suicide by faking her own death, this histrionic Cleopatra who fails to seduce Octavian before welcoming the asp, who is seared into our collective memory. The prevalence of this version didn’t emerge by happenstance; it was the result of deliberate political maneuvering. In the wake of their defeat, Cleopatra was turned into the scapegoat upon which the Empire was built. This effort is clearest in Horace’s ode celebrating Octavian’s victory. He describes Cleopatra as a “fatale monstrum”* “made mad by Mareotic grape,” though he allows that the woman “sought to die more nobly.” But what is truly notable is the person the poem doesn’t mention: Antony. Immediately, Cleopatra was presented as the vanquished enemy upon which the Empire was built: the exotic seductress who whored and bewitched her way to influence. The lauded Republic may have fallen when Octavian became Emperor Augustus, but it was no fault of the vying ambitious of Roman men. Conveniently, there was a wily woman to blame. And thus her role comes full circle: From being disappeared from Caesar’s narrative Cleopatra goes on to subsume Antony’s.

In the end, the reason Cleopatra’s saga hews so closely to all these gendered stereotypes is because her story was intentionally crafted to do so. Perhaps I should have already suspected as much—the stories we tell about women are so often the product of such calculations. And when we do find a female champion, we want her flawless—as the “first,” she represents so many of our hopes. But it’s easy to demand perfection, to embrace the blank slates of history, the ones who haven’t been exposed to decades—or millennia—in the public eye. What’s harder is accepting the female heroes that we have, not the ones we hope one day to deserve.

We don’t yet know what long-term legacy Hillary will leave, but there are hints of how quick we are to sully her name and leave that bitter memory behind. She’s already taken the hit for the Democrats’ failures from conservative commentators and left-wingers alike. The rest of us are moving on. I can only hope that once the dust settles we are as forgiving of Hillary as we’ve been of Al Gore (that other egghead centrist Democrat who won the popular vote—by a much smaller margin—but lost the presidency). To truly put women on equal footing, we need to be as forgiving of their failings as we are of men’s. And to remember that the reason we find so many female leaders disappointing is because their stories are fed to us through a harsher lens.

*The Latin translates most directly to doomsday portent, or an evil omen, but has a wide range of English interpretations.

Emily Holleman, a graduate of Yale University, spent several years as an editor for Salon. Currently based in Brooklyn, she has devoted the past three years to reading and writing about the Ptolemies and is, like Arsinoe, a younger sister. She is the author of Cleopatra's Shadows: A Fall of Egypt Novel and The Drowning King.

Investigating the Brilliance of the Late João Gilberto Noll 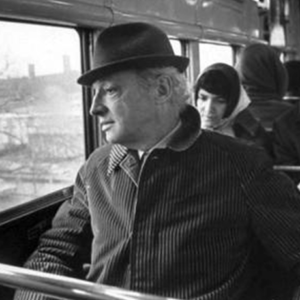 20 rare photographs of Allen Ginsberg, on the anniversary of his death. | Literary Hub The longest winter: a year-by-year...
© LitHub
Back to top