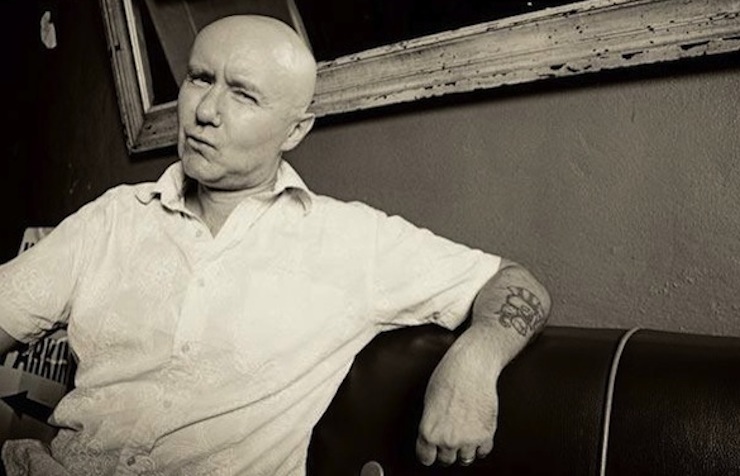 Irvine Welsh will be appearing at the June 15 season-finale of House of SpeakEasy, along with Steven Pinker, Sarah Lewis, Edward Hirsch, and Rebecca Newberger Goldstein. City Winery, doors at 6pm. Buy tickets here.

I’m not sure there’s a more distinctive opening to a novel in the last 25 years. “The sweat wis lashing oofay Sick Boy; he wis trembling. Ah wis jist sitting thair, focusing oan the telly, tryin no tae notice the cunt…” The diction’s as distinctive as Huck Finn’s or Alex DeLarge’s, and every bit as witty: a sort of neo-Burnsian dialect spiked with exuberant profanity. It’s dark and arch at the same time, combining social commentary with scatalogical humor. The characters—Renton, Begbie, Sick Boy, Spud, Diane—are vivid, memorable, and humane (well, maybe not Begbie). Irvine Welsh’s achievement in Trainspotting was both brilliant and outrageous.

And 22 years haven’t diminished its energy or power. But Welsh hasn’t coasted. He’s written nine more novels, including Porno and Skagboys, respectively a sequel and a prequel to Trainspotting, and Filth, which was made into a glorious headache of a movie a couple years back starring a fiercely repulsive James McAvoy. The short story collection The Acid House was also filmed, in 1998, and Welsh has written a number of original screenplays. He even recorded a single in the 90s with Primal Scream. The Sex Lives of Siamese Twins, a sort of bisexual feeder fantasy set in Miami and Chicago, was published in February in the US, while A Decent Ride, which returns to an Edinburgh familiar from his best-known work, just came out in the UK.

The siamese twins of Sex Lives are both literal and metaphorical. A lurid reality-TV siamese-separation case plays second fiddle to the psychopathic relationship that develops between a hardass personal trainer and a washed-up Chicago artist in the wake of a shared trauma. Lucy Brennan is a juice-cleansing hardbody super-fuelled by hatred for the obese; Lena Sorenson is a talented sculptress with a self-esteem deficit and a weakness for baked goods. Throw in pedophile vagrants and some empty Miami real-estate, and you have the ingredients for some seriously gross-out satire.

It’s a far cry from the streets of Leith. I ask Welsh if he’d had any difficulties with or anxiety about adopting an American register. “It’s a bit easier,” he says, “as it’s closer to standard English than Scots, which is made up of different dialects. The hardest part is the cultural references, particularly the TV programs Americans of that generation would grow up with. I had to do a lot of research on that. I’m lucky in that my wife is American, and of the Lucy/Lena era.”

Still, as one might expect, it’s mostly NC-17 stuff. Most summaries of Welsh’s work catalog the more extreme content: the heroin abuse, the rape, the excrement, the murder… A Decent Ride adds incest and necrophilia to the list. Trainspotting famously missed out on the Booker Prize shortlist because two of the judges thought it distasteful. Welsh was accused of amorality, of glamorizing heroin use, of celebrating depravity. Earlier this year, he wrote an essay in defense of Bret Easton Ellis’s American Psycho, a book which also brought down uncommon opprobrium on its author. Many of its most censorious commentators were not only disgusted but angry. “Those reactions were mainly directed towards the passages of extreme violence contained in the book,” he wrote; “the objectification of women, the use of pornography and the supposed ‘manipulation’ of the reader. Yet, they were often acts of bad faith and were based on fatuous notions.”

Another way of reading both Psycho and Trainspotting is to see them as products of their social contexts. In Psycho it’s the end of the Reagan era; in Trainspotting, it’s the culture of individualism that prevailed in the late 1980s and early 90s in the United Kingdom. Ellis and Welsh’s characters are the logical products of their milieu, at least as their creators perceived them. Still, Welsh concedes that outrage isn’t always disingenuous.

“It’s not really for me to say that they [critical reactions] are in bad faith,” he says. “I’m sure the people writing the reviews don’t see it that way. Shakespeare was full of all the same stuff. It’s a general observation that the literati, like all members or acolytes of the upper-middle-class establishment, have a problem with contemporary working-class voices and expressions of anger.” Does that kind of reaction not bore him? “Yes, it’s bored me at every stage of my career. I don’t really read reviews. I seldom see them until it’s time to look for quotes for the dust jacket of the paperback.”

Music is another major tributary to Welsh’s fictional worlds. It’s clearly hugely important to him, as one can see from his favorite albums, and a 50-song playlist he compiled for Sabotage Times. In Trainspotting, lyrics and musical references are part of the texture of the characters’ lives: the minister at Matty’s funeral remembers his “lust for life”; other doomed figures are destined for “the great gig in the sky.” How does he see music interacting with his fiction? “I use music to help me find a character. By making up a play list for each character, I find it really puts psychological meat on their bones.” It’s no surprise, perhaps, that Sex Lives’ Lucy Brennan is a Joan Jett fan.

Welsh tweets and some 180k followers take note. His subjects are predominantly sports (the Times Storify’d his coverage of Andy Murray’s US Open win in 2012) and politics. How seriously does he take social media? “Slightly more seriously than I take the mainstream media, which is obviously not very seriously at all. I think it’s more about the subject matter than the medium. Some things call to be taken seriously. You can’t have something like, say, Charlie Hebdo and not be serious about it, but other things should to be laughed at.”

Charlie Hebdo is an interesting case in point, I suggest, with Peter Carey, Joyce Carol Oates and others boycotting last month’s PEN American gala in which the French magazine was honored. Is there a right side of that argument to fall on? “I don’t think there is a wrong argument; in this case it’s two opposing rights. I have respect for the writers who boycotted the gala. It was obviously something they knew they would get criticism for, in an environment where Charlie Hebdo has been so lionized in the west, but they felt strongly about it and went for it, so all power to them.”

It could be a while before we see it, though: reports suggest that Danny Boyle, who directed Trainspotting, is waiting for his actors to have aged sufficiently to convincingly play Welsh’s ageing junkies. Not easy when you factor in the Hollywood facial regimes. In the meantime, we can look forward to more from Welsh himself. A Decent Ride will be published in the US next year, and if you can’t wait, there’s always the ongoing soap opera of British politics and Andy Murray’s career to sustain Welsh’s rambunctious flow of Twitter commentary.

The guy could make anything interesting. When Herzog’s girlfriend orders English muffins in a diner, she calls after the waitress:...
© LitHub
Back to top