Inside The World of Lore: A Spooky Podcast Jumps to Page and Screen

Christina Newland Talks to the Man Behind the Monstrous Creatures

Aaron Mahnke—the creator, writer, and voice of Lore—is having a busy October. The podcast at the centre of that buzz has slowly become a juggernaut, with some 6 million bi-monthly listeners, a brand-new Amazon series from the executive producer of The Walking Dead, and an upcoming book series under the umbrella of The World of Lore. All of these new formats are linked by Mahnke’s strong sense of narrative, and his desire to give the audience a good, if instructive, scary story.

The focus of Lore—the podcast, the spin-off anthology TV series, and the newly released book—is a socio-historical examination of worldwide folklore, mysterious happenings, superstitions and their origins. In his now 70-plus episodes (which are 20 to 30 minutes each) Mahnke researches and presents his material in a captivating storytelling form, covering everything from Native American legend to modern disappearances and stories of possessed dolls. The podcasts range from neatly historical cases with explicable causes to the more maddeningly strange. Accordingly, they also vary on the spectrum from unsettling to “better turn on every light in the house.”

In the first of what will be a trio of books, stories are organized under the heading Monstrous Creatures and further divided for their status—ghosts, little people, vampires, and the like. If the conceit seems fantastical, the reality is far more grounded in human truth than one might assume. Lore’s basis in certain universal human fears, social behaviors, and psychological tendencies toward hysteria give it an intellectual underpinning of the subtlest kind.

Horror and true crime have proven remarkably steadfast as both a commercial literary proposition and as a podcasting mainstay. But Lore is both softer and looser than either of the above category. What really differentiates Mahnke’s series from many others in the “spooky” field is his dedication to exacting research and his seemingly effortless tonal balance—part campfire story and part anthropological deep dive.

Mahnke’s narration, measured but conspiratorial, is from the viewpoint of a curious skeptic, placing him at just enough of a distance from the often outlandish material. “I think there’s something tantalizing about that gray area between the known and the mysterious.” Aaron tells me by phone. “I think all of us have, at some level, the desire to know all the answers, but we’re also utterly in love with the mystery. So I try to walk that line in service to that.”

With Monstrous Creatures, Mahnke seems less concerned about making strides into the literary world as he does with giving his existing fan base a collection they’ll feel they’re in familiar territory with. Part contemporary bestiary and part twisted collection of bedtime stories, the prose is conversational—and often directly transcribed from previously—existing podcasts.

Aaron feels comfortable with the transition from verbal to written storytelling, largely because he tries to keep his narrative voice consistent across mediums. “It’s not a doctoral anthropology thesis on folklore, right? It’s storytelling. You’re writing to a different audience. And for me, I like to think the audience is seated in front of me, around a fire. With a glass of scotch or something. So that’s how I try to communicate. So I write for the spoken word, and that determines my voice.” The book is also lavishly illustrated, heightening that storybook sense that the author is aiming for.

For many of Aaron’s most devoted listeners—myself included—Monstrous Creatures makes for a sophisticated supplement to a longtime interest. I was a pre-teen who kept a mini-library of books on the occult, the Bermuda Triangle, and cryptozoology—and for me, Lore offers adult skepticism and an anthropological framework to balance that childhood fascination with the unknown. Aaron seems to understand that part of his audience well: “They’re these antiques that have been handed down to us in stories. We live in a modern world that keeps taking the shadows away from us. Science, medicine, technology—it’s all great, but it also takes the unknown out. Just like any good graphic design project needs a bit of white space, I think our lives need a little bit of shadow and mystery. People are seeking that.”

Perhaps accordingly, Lore has proven to be catnip for many of its millennial audiences. In a gentle, oblique way, the series has also touched on subjects that may be striking to a young, politically engaged audience. So many of the running themes of world folklore still make their presence known today—rampant misogyny, bigotry, and terror of outsiders. As Aaron puts it succinctly: “We no longer hang or burn witches, but we still have ‘others’ in society today we go after. I never want to say, let’s pause for a second and talk about the current administration. Then you’re pulled out of the story. You still have to do it in a way that is within the story. But I will continue to push those boundaries. It’s not that I’m pushing a liberal agenda, or a conservative agenda. I’m pushing ‘here’s what we tend to be as people, and we can be better than that.’”

The World of Lore: Monstrous Creatures and its attendant material could, theoretically, be a guilty pleasure. But in practice, it’s too rich and well-considered for that to be the case—vampire stories or not. By dint of its revelatory socio-historical knowledge and its deeply involving style, the book is a fine extension of the existing Lore machine—one that understands the universality of our darkest fears.

“That’s why these stories exist hundreds of years later,” Mahnke tells me. “Because there’s some part of them that’s part of who we are today. And we’re morbidly fascinated by them.”

Isabel Allende on Harry Potter, Dostoyevsky, and the Gift of Reading

On Horror, Heavy Metal, and Why We Love to Be Scared 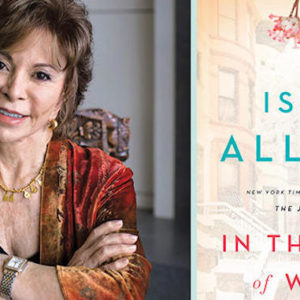 Isabel Allende on Harry Potter, Dostoyevsky, and the Gift of Reading

Isabel Allende's new novel, In the Midst of Winter, is available October 31. * What was the first book you fell in love...
© LitHub
Back to top