Inside the Unpublished World of Allen Ginsberg

The following is adapted from the introduction to Wait Till I’m Dead, the first new collection of Allen Ginsberg’s poetry in over 15 years.

More than anything else, Allen Ginsberg was a steady and prolific poet, and his poetry chronicled his busy life. He wrote incessantly for more than 50 years, from the early 1940s until a few days before his death in April 1997. He was extremely generous with his work, often composing poetry on demand, although he disliked the pressure that put him under. In the wee hours of the night he wrote poems that would be sent off in the morning to support a cause or encourage young students to write poetry. Sometimes he would send his first and only copy, so that he didn’t even have a complete record himself of all he had written. At times he grew weary of the work and complained that he was overburdened, but the complaint often took the shape of a poem itself. Once he wrote back to one of his solicitors, “Want more poems? Wait till I’m dead,” and from that note comes the title of his most recent collection of uncollected poems.

There were hundreds of poems composed and never collected, poems spanning the broad range of his life and career. Ginsberg loved gathering his works together. He kept copies of his essays, his interviews, his music, and his speeches and organized them in large file cabinets in his office. I spent most of the 1980 and 1990s helping him organize his journals, press clippings, manuscripts, and correspondence, as well as his enormous photography archive. It was always with the knowledge that some day they would be made available, another example of his generous nature. So it gives me great pleasure to once again work on a project that Allen would have loved—collecting the uncollected.

“Wyoming” was first published in the Poetry Project Newsletter. This was the newsletter for the St. Marks Poetry Project, which began in the early 1970s in Ginsberg’s own neighborhood, the East Village. A huge number of influential poets have read at the Poetry Project in the half century since its founding, and Ginsberg was an active member, reading there on dozens of occasions. From time to time, they included short poems in the newsletter.

This manuscript is a good demonstration of Ginsberg’s writing process. He usually composed, edited, and added notes on his manuscripts and then would retype clean versions to send out to friends and little magazines for publication.

As the title suggests, Ginsberg wrote this poem in response to a request for a poem from a school in New Jersey. It was published in their high school magazine and is a good example of Allen’s generosity to anyone who wrote him asking for poems.

“What’s buzzing” was written while Ginsberg was living in San Jose with Neal and Carolyn Cassady during the mid-1950s. At the time, one of the earliest mimeo magazines was being produced in North Beach, near the City Lights Bookstore in San Francisco. This magazine was edited by a series of poets and editors who rotated the work and continue to sporadically publish to this day.

“Tokyo Tower” was written on a trip Ginsberg made in the summer of 1963 to Japan. After staying in Morocco and India for nearly two years, Allen visited Gary Snyder and Joanne Kyger, who lived in Kyoto at the time. When Ginsberg later returned to America, he offered the poem to the small magazine Ferret for publication.

The above is typical of Ginsberg’s notations and archival methods from this period. He would often just stuff poems into an envelope with only scant notes; at a future time, he would re-examine the poems and make editorial changes where needed.

This mimeo mag is unidentified but is most likely Big Scream no. 20 from 1985, which contains Allen’s untitled poem about his trip to China. This would make the inscription on the cover by David Cope, the magazine’s editor and founder. David Cope was a young poet who Ginsberg championed during the 1980s. He is a professor in Michigan and studied with Ginsberg at the Naropa Institute where they became close friends. Big Scream featured the writings of several of Allen’s younger “discoveries” including Andy Clausen and Antler. The magazine is still active.

Bill Morgan has written and edited thirty-nine books, including I Celebrate Myself: The Somewhat Private Life of Allen Ginsberg.
Share:

We Are Being Watched

The Rise of the Cuban Literati: In Sunshine and In Shadow 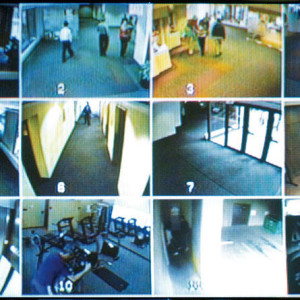 We Are Being Watched The following is an edited version of Bryan Hurt's introduction to Watchlist It began with the baby monitor. Months before...
© LitHub
Back to top
Loading Comments...