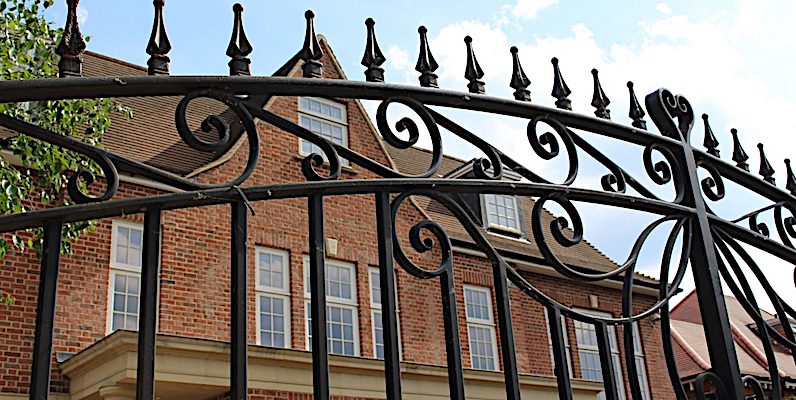 As Business Insider recently revealed, one of the properties in this neighborhood, at 9 The Bishops Avenue, was once the safe house of British-Indian author Salman Rushdie. Rushdie used the property after his 1988 novel The Satanic Verses—though largely acclaimed in the West and shortlisted for the Booker prize—incited outrage in some quarters of the Muslim world for making blasphemous references to Islam. Ultimately, Ayatollah Khomeini declared a fatwa against the author, and Rushdie was forced to go into hiding.

In addition to his prolific writing career, Rushdie founded the PEN World Voices Festival, an annual forum for international literature, and has become a prominent advocate of free speech.

During Rushdie’s almost decade-long stay in London, he hid under the (very literary) pseudonym “Joseph Anton,” moving between safe houses in the English countryside before settling in the London mansion.

David Ashton Hill, the architect of Rushdie’s safe house, told Business Insider that upgrading the residence took nine months, from 1991-92. Among the first things constructed were a security gate and a porch with a double door. The installation of bulletproof glass, security cameras, fortified walls, lodging for six police officers, and “bomb-proof net curtains,” soon followed. The reception hall in the center of the mansion was built in the shape of an octagon; one of the eight wings extending from it led to a safe room.

We may never know whether Rushdie ever needed to use the safe room. Hill declined to comment on this.

Maybe unsurprisingly, Billionaires Row wasn’t quite known as a haven for saints. The owner of the house before Rushdie moved in was a sketchy banker who’d left under mysterious circumstances. Rushdie’s neighbors included arms dealers, newspaper barons, and South Asian royals.

Rushdie stayed at 9 The Bishops Avenue until 1998, when the Iranian government rescinded the fatwa. Unfortunately, Rushdie wasn’t entirely free from threats against his life. In 2016, 27 years after the fatwa was issued, more than three dozen state-run news organizations in Iran cobbled together $600,000 to contribute towards a $4 million bounty that had been placed on Rushdie’s head by an Iranian religious organization in 2012.

Obviously, this hasn’t been enough to stop him. His latest novel, Quichotte, was shortlisted for the 2019 Booker Prize and was released to positive reviews.