In Women Talking, Acts of Imagination Are Acts of Resistance

Before the movie, before the novel, there was the horrific reality: in the early 2000s, in an isolated Mennonite community in the Bolivian lowlands, women began to awaken naked, disoriented, and in pain, sometimes covered with cuts and bruises. Community leaders dismissed the mysterious attacks for years, insisting that they were the work of the devil or that the women were simply lying or imagining things. Eventually, nine men were convicted of the assault and rape of 151 women and girls. The men, all members of the community, had used livestock anesthetic to immobilize their victims, who ranged in age from 65 to just five years old.

In 2018, Canadian author Miriam Toews, who was raised in a small Mennonite town in Manitoba, published her novel Women Talking, in which eight women from a fictional Mennonite community meet in a hayloft to debate their response to a similar series of crimes. Should they do nothing, stay and fight, or leave the only home they know? On their way to a decision, the women argue about the nature of evil, the limits of forgiveness, and the meaning of faith, interspersing their intellectual debate with rage, panic, cruelty, and even laughter. In response to the gaslighting of the real-life victims, Toews calls her book “an act of female imagination,” and it is a powerful one—compact, intricate, and unsparing.

The movie Women Talking, directed by Sarah Polley, follows the novel in many ways, capturing both its emotional desolation and flashes of humor. But Polley and her magnificent cast have brought their own imaginations to this nearly unimaginable story, and their distinctive telling has its own power.

Surprisingly, the narrator of the novel Women Talking is a man: August Epps, whose family was exiled from the community years earlier, has returned to teach at its school (which only boys are allowed to attend), and the women enlist him to document their secret meeting. August, who is considered a “failed farmer” and thus widely despised in the community, represents a far gentler form of manhood, one willing to listen as women talk. Toews also draws a clever contrast between August and the fourth-century theologian St. Augustine, whose work is foundational to Christian thought; even as the women reach some distinctly non-Augustinian conclusions, August keeps quiet, dutifully taking notes.

The movie is narrated, in voiceover, by a grown-up version of Autje (Kate Hallett), one of the two teenagers who takes part in the hayloft debate, and she addresses her narration to a child conceived but not yet born during the movie’s events. The character of August, played by Ben Whishaw, is still integral to the plot but sidelined—a decision that removes some complexity from the story but also removes a filter, heightening its intensity.

At the same time, Autje’s adult reflections assure the movie’s audience that at least one of the women will live to tell her tale; the novel provides no such certainty. The movie also supplies more visual particulars than the book—its washed-out palette is especially evocative, reflecting both the harsh climate and a culture where ornament is discouraged—but it elides or eliminates many of the book’s dates and place names, suggesting that such atrocities could happen in any community where power is unquestioned.

Claire Foy, as the enraged young mother Salome, and Rooney Mara, as Salome’s more contemplative sister Ona, lead the movie’s cast, but the movie, like the novel, is an ensemble production, and every character is significant (Frances McDormand, as Scarface Janz, appears onscreen for less than ten minutes but plays a pivotal role). In both versions, the conversation among the women is sometimes oddly formal, even stagey—but appropriately so, for these characters are to some extent performing, taking the trouble to ensure that their deliberations are both thorough and thoroughly witnessed. The women know that church authorities expect them to forgive their assailants, and will condemn them as heretics if they refuse to do so.

Yet they take their faith, and themselves, seriously enough to examine the assumptions beneath this ultimatum and conclude that evil, in any guise, deserves no deference. “We’re only women talking,” one of the group tells an interloper. As Toews, Polley, and the movie’s cast make clear, women talking are also women thinking, and acts of imagination can also be acts of resistance.

Even as we admire the courage of these characters and these works of art, it’s important to acknowledge—as Toews does in her final pages, but the movie does not—that they have not brought an end to the suffering of the women and girls who inspired the story, nor of others like them. Though eight of the men convicted of rape remain in prison in Bolivia, community leaders have lobbied for their release in the name of forgiveness, and there are reports of more recent assaults within the community.

Toews, who left her hometown at 18 and is no longer a practicing Mennonite, emphasizes that the faith is diverse: “There are ways of being Mennonite in the world that are about equality and have female ministers that are open to the LGBTQ+ community and are loving and tolerant,” she has said, adding that she was “horrified but not surprised” by the crimes in Bolivia. Too often, the forces of patriarchy and fundamentalism within such insular communities continue to silence women and girls, and expose them to dangers beyond imagining. 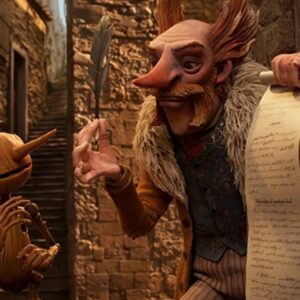 If you feel like giving the middle finger to your job or education, you’re not alone. Pinocchio, of all people, is on your...
© LitHub
Back to top