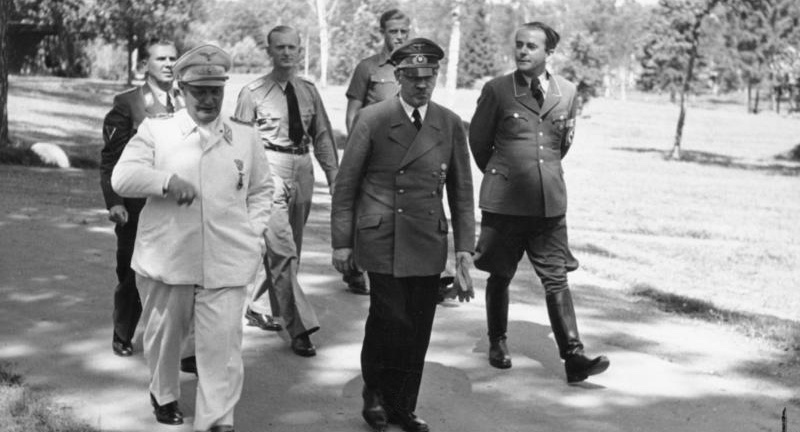 “And there they stand, affectless, like twenty-four calculating machines at the gates of Hell.”
–Éric Vuillard, The Order of the Day
*

The invitations, sent by telegram four days earlier, left no doubt. The capital was calling. On Monday, February 20, 1933, at 6 pm, about two dozen of Nazi Germany’s wealthiest and most influential businessmen arrived, on foot or by chauffeured car, to attend a meeting at the official residence of the Reichstag president, Hermann Göring, in the heart of Berlin’s government and business district.

Three weeks earlier, Adolf Hitler had seized power in Germany after concluding a backroom deal that led the Reich president, Paul von Hindenburg, to appoint Hitler as chancellor. Now the leader of the Nazi Party wanted to “explain his policies” to the group of industrialists, financiers, executives, and heirs, or at least that’s what he’d led them to believe. The businessmen were hoping for reassurance concerning the direction of Germany’s economy under this new government. They would not get it. Hitler had his own plans for the meeting, and the country.

The businessmen arrived on time at Göring’s palatial sand-red residence on the south bank of Berlin’s Spree River, next door to the Reichstag. But they were kept waiting — not something that the impatient tycoons were particularly used to or fond of. Göring, their host, didn’t greet them until fifteen minutes after the scheduled start time. In tow was Walther Funk, the dumpy and balding chief press officer for Hitler’s government.

The new chancellor arrived even later, accompanied by Otto Wagener, his main economic adviser. The master of ceremonies was Hjalmar Schacht, formerly president of the Reichsbank. (As it turned out, Funk, Schacht, Göring, and Schmitt, four of Hitler’s future ministers of economic affairs, were all present.) The meeting was the culmination of years of careful groundwork laid by Hitler’s officials—years of cultivating relationships with the tycoons to build up enthusiasm for the Nazi cause.

After shaking hands with the businessmen, Hitler launched into a rambling ninety-minute speech, delivered without notes or pauses. But instead of the policy talk that had been promised, Hitler gave a sweeping diagnosis of the current political moment. The year 1918 had been a catastrophic turning point in German history, with the defeat of the German Empire in World War I and the revolution in Russia, during which the Communists came to power. In Hitler’s eyes, the time had come to settle the struggle between the right and the left once and for all.

Hitler didn’t speak about abolishing labor unions, rearmament, war, or the removal of Jews from German life. But he did provide a glimpse of what was to come: “We must first gain complete power if we want to crush the other side completely.” Hitler argued that, in supporting his rise as führer, the moguls would in effect be supporting themselves, their firms, and their fortunes. “Private enterprise cannot be maintained in the age of democracy,” the forty-three-year-old chancellor said. “It is conceivable only if the people have a sound idea of authority and personality. Everything positive, good and valuable, which has been achieved in the world in the field of economics and culture, is solely attributable to the importance of personality.”

Near the end of his speech, Hitler laid out how that would happen. In only two weeks, on March 5, the people of Germany would determine the country’s future by casting their votes in the national election—“the last election,” according to Hitler. One way or another, democracy would fall.

Germany’s new chancellor intended to dissolve it entirely and replace it with a dictatorship. “Regardless of the outcome,” he warned, “there would be no retreat. There are only two possibilities, either to crowd back the opponent on constitutional grounds or a struggle will be conducted with other weapons, which may demand greater sacrifices.” If the election didn’t bring Hitler’s party into control, a civil war between the right and the left would certainly erupt, he intimated. Hitler waxed poetic: “I hope the German people recognize the greatness of the hour. It shall decide the next ten or probably even hundred years.”

Hitler didn’t speak about abolishing labor unions, rearmament, war, or the removal of Jews from German life. But he did provide a glimpse of what was to come.

The arms and steel tycoon Gustav Krupp, as chairman of the Reich Association of German Industry, was first among equals in the group of businessmen and its designated spokesperson. The sixty-two-year-old industrialist had prepared an extensive memo on economic policy for this meeting, his first encounter with Hitler. But given that the new chancellor had just called for the dissolution of German democracy, Krupp thought it best not to initiate a dialogue on the boring details of policy.

Instead, he meekly thanked the chancellor on behalf of the gathered men “for having given us such a clear picture of the conception” of his ideas. Krupp wrapped up with anodyne general remarks about the need for a swift remedy to Germany’s political troubles and for a strong state, which would help the “economy and business develop and flourish.”

After listening to Krupp’s remarks, the Austrian-born chancellor didn’t take any questions from his audience, nor did he reveal the true purpose of the meeting. He left that to the host, Göring. Hitler departed.

Göring opened the topic with a welcome promise of stability. He assured the giants of industry and finance “that with political pacification, [the] domestic economy would also quiet down.” No economic “experiments’’ would be conducted, he said. But to guarantee a favorable climate for business, Hitler’s new coalition had to emerge victorious in the coming election. The Reichstag president got to the main point: the Nazi Party needed money for the election campaign. Because taxpayers’ money and state funds couldn’t be used for political ends, “other circles not taking part in this political battle should at least make the financial sacrifices so necessary at this time.”

Göring’s conclusion echoed Hitler’s: it was more than reasonable to request “financial sacrifices” of these industry titans, given that “the election of March 5th would surely be the last one for the next ten years, probably even for the next hundred years.” After these remarks, Göring exited the room, leaving his guests stunned, with much to ponder.

Then the mustachioed economist Hjalmar Schacht took the floor. Unlike the previous two speakers, Schacht got right down to business and suggested raising an election campaign fund of three million reichsmarks (about $20 million in today’s money) for the benefit of the Nazi Party and its nationalist coalition partner, the German National People’s Party, which it still needed, in order to rule the country. But not for much longer.

Right on the spot they allocated the sums. One million reichsmarks were to be paid by the black coal and iron industries from the Ruhr area, and 500,000 reichsmarks each by the potash mining and chemicals industries. The remaining million would be drawn from the brown coal industry, car-makers, and mechanical and electrical engineering firms. The men agreed that 75 percent of the money would go to the Nazi Party. The remaining quarter would proceed to its coalition partner. In conclusion, Schacht uttered the shortest and most expensive line of the evening: “And now, gentlemen, to the cash register!”

Hitler’s invitation to a discussion of economic policy had been, in truth, little more than a pretext for requesting millions to build up an election campaign slush fund. Hitler and Göring had conveniently left out an important detail: the dire financial state of the Nazi Party. It was more than twelve million reichsmarks in debt, and the little cash on hand was far from enough to stage a national election campaign. But this issue would be quickly resolved.

The day after the meeting, February 21, 1933, thirty-five-year-old Joseph Goebbels, who led the Nazi propaganda machine from Berlin as the capital’s Gauleiter (regional leader), wrote in his diary: “Göring brings the joyful news that 3 million is available for the election. Great thing! I immediately alert the whole propaganda department. And one hour later, the machines rattle. Now we will turn on an election campaign Today the work is fun. The money is there.” Goebbels had started this very diary entry the day before, describing the depressed mood at his Berlin headquarters because of the lack of funds. What a difference twenty-four hours could make. 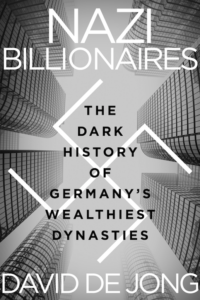 David de Jong is a journalist who previously covered European banking and finance from Amsterdam and hidden wealth and billionaire fortunes from New York for Bloomberg News. His work has also appeared in Bloomberg Businessweek, the Wall Street Journal, and the Dutch Financial Daily. A native of the Netherlands, de Jong currently lives in Tel Aviv. He spent four years researching and writing Nazi Billionaires from Berlin. 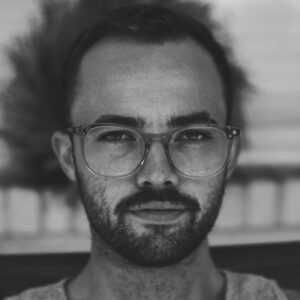