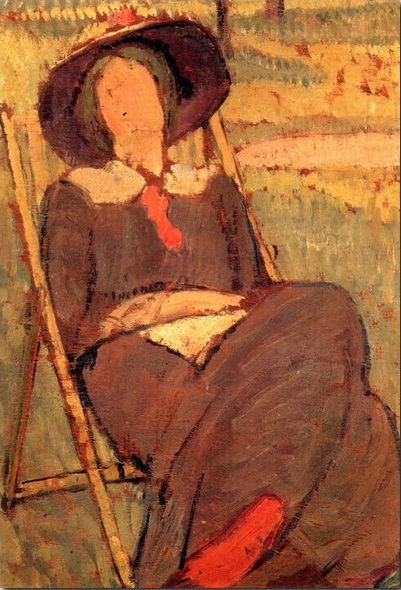 The following short story, In the Orchard, by Virginia Woolf, was first published in the magazine The Criterion in April 1923. T.S. Eliot, a contemporary of Woolf's and fellow member of the Bloomsbury group, edited the piece before its publication.

Miranda slept in the orchard, lying in a long chair beneath the apple tree. Her book had fallen into the grass, and her finger still seemed to point at the sentence ‘Ce pays est vraiment un des coins du monde oui le rire des filles elate le mieux … ‘ as if she had fallen asleep just there. The opals on her finger flushed green, flushed rosy, and again flushed orange as the sun, oozing through the apple-trees, filled them. Then, when the breeze blew, her purple dress rippled like a flower attached to a stalk; the grasses nodded; and the white butterfly came blowing this way and that just above her face.

Four feet in the air over her head the apples hung. Suddenly there was a shrill clamour as if they were gongs of cracked brass beaten violently, irregularly, and brutally. It was only the school-children saying the multiplication table in unison, stopped by the teacher, scolded, and beginning to say the multiplication table over again. But this clamour passed four feet above Miranda’s head, went through the apple boughs, and, striking against the cowman’s little boy who was picking blackberries in the hedge when he should have been at school, made him tear his thumb on the thorns.

Next there was a solitary cry—sad, human, brutal. Old Parsley was, indeed, blind drunk.

Then the very topmost leaves of the apple-tree, flat like little fish against the blue, thirty feet above the earth, chimed with a pensive and lugubrious note. It was the organ in the church playing one of Hymns Ancient and Modern. The sound floated out and was cut into atoms by a flock of field-fares flying at an enormous speed—somewhere or other. Miranda lay asleep thirty feet beneath.

Then above the apple-tree and the pear-tree two hundred feet above Miranda lying asleep in the orchard bells thudded, intermittent, sullen, didactic, for six poor women of the parish were being churched and the Rector was returning thanks to heaven.

And above that with a sharp squeak the golden feather of the church tower turned from south to east. The wind changed. Above everything else it droned, above the woods, the meadows, the hills, miles above Miranda lying in the orchard asleep. It swept on, eyeless, brainless, meeting nothing that could stand against it, until, wheeling the other way, it turned south again. Miles below, in a space as big as the eye of a needle, Miranda stood upright and cried aloud: ‘Oh, I shall be late for tea!

Miranda slept in the orchard—or perhaps she was not asleep, for her lips moved very slightly as if they were saying, ‘Ce pays est vraiment un des coins du monde … oui le rire des filles … eclate … eclate … eclate .’and then she smiled and let her body sink all its weight on to the enormous earth which rises, she thought, to carry me on its back as if I were a leaf, or a queen (here the children said the multiplication table), or, Miranda went on, I might be lying on the top of a cliff with the gulls screaming above me. The higher they fly, she continued, as the teacher scolded the children and rapped Jimmy over the knuckles till they bled, the deeper they look into the sea—into the sea, she repeated, and her fingers relaxed and her lips closed gently as if she were floating on the sea, and then, when the shout of the drunken man sounded overhead, she drew breath with an extraordinary ecstasy, for she thought that she heard life itself crying out from a rough tongue in a scarlet mouth, from the wind, from the bells, from the curved green leaves of the cabbages.

Naturally she was being married when the organ played the tune from Hymns Ancient and Modern, and, when the bells rang after the six poor women had been churched, the sullen intermittent thud made her think that the very earth shook with the hoofs of the horse that was galloping towards her (‘Ah, I have only to wait!’ she sighed), and it seemed to her that everything had already begun moving, crying, riding, flying round her, across her, towards her in a pattern.

Mary is chopping the wood, she thought; Pearman is herding the cows; the carts are coming up from the meadows; the rider—and she traced out the lines that the men, the carts, the birds, and the rider made over the countryside until they all seemed driven out, round, and across by the beat of her own heart.

Miles up in the air the wind changed; the golden feather of the church tower squeaked; and Miranda jumped up and cried: ‘Oh, I shall be late for tea!

Miranda slept in the orchard, or was she asleep or was she not asleep? Her purple dress stretched between the two apple trees. There were twenty-four apple-trees in the orchard, some slanting slightly, others growing straight with a rush up the trunk which spread wide into branches and formed into round red or yellow drops. Each apple-tree had sufficient space. The sky exactly fitted the leaves. When the breeze blew, the line of the boughs against the wall slanted slightly and then returned. A wagtail flew diagonally from one corner to another. Cautiously hopping, a thrush advanced towards a fallen apple; from the other wall a sparrow fluttered just above the grass. The uprush of the trees was tied down by these movements; the whole was compacted by the orchard walls. For miles beneath the earth was clamped together; rippled on the surface with wavering air; and across the corner of the orchard the blue-green was slit by a purple streak. The wind changing, one bunch of apples was tossed so high that it blotted out two cows in the meadow (‘Oh, I shall be late for tea!’ cried Miranda), and the apples hung straight across the wall again.

Ta-Nehisi Coates's "Between the World and Me" in 10 Quotations 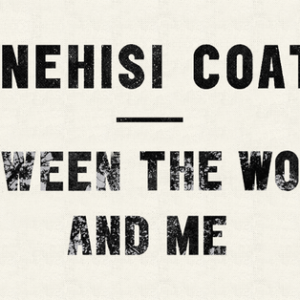 Ta-Nehisi Coates's "Between the World and Me" in 10 Quotations Every other week Oscar van Gelderen, the publisher at Lebowski in Holland, who blogs here, summarizes a notable work of (non)fiction...
© LitHub
Back to top