In Praise of the Meander: Rebecca Solnit on Letting Nonfiction Narrative Find Its Own Way

This summer, a day after a promising thunderstorm, my friend Greg took me mushroom hunting in the New Mexico mountains where he’s been collecting them for forty years or more. If we’d tracked the routes we took, they would’ve resembled how toddlers scribble across a piece of paper, back and forth, back and forth, with a bit of round and round. We were looking at the ground, unhurriedly, trying to discern boletus mushrooms in the moist leaf litter, bending down to inspect and occasionally collect. I was detouring to admire the wildflowers in the little meadows punctuating the aspen and pine forest, and he was naming all the species of fungi and teaching me what to look for and vetting every mushroom that got plucked from the earth and popped in his sack.

Most of the time I go into such landscapes, I walk or run, cutting a line through the landscape, but I learned in the years when I used to gather gallons of blackberries in the tree-shaded gulch through which a creek ran, that there’s another kind of depth achieved by moving slow, seeing close-up, lingering, living in detail. You’re not trying to get somewhere else but to know where you are. Some books have a single storyline, and they pass briskly through the landscape, often to a destination that doubles as payoff as “What the hell will Jane do with Rochester?” or “Who got the Eustace diamonds?” Or they tread a wide familiar road that is the chronology of a life, a movement, a war, or some other event.

Other books—some of mine, I hope—are instead trying to map the surrounding territory and understand where we are. That is, such books are not linear, not built around a single chronology—in fact, they are often not structured around chronology at all. But just as a mushroom hunter is neither lost nor without purpose, these books are not without structure or direction. Why not understand by analogy, decenter the narrative, seek patterns of resemblance in parallel, explore the terrain rather than cutting a swathe through it? Why not meander and see what lies alongside? Such books are concerned not so much with what happens but with what it means; they are less about destination as resolution, and more about meaning revealed along the way.

Though I’m overall grateful for the reception of my new book Orwell’s Roses, reviewers have called it “a collection of essays” a number of times, which suggests a failure to recognize structure or internal cohesion if it is not tightly focused on a single figure or a chronological sequence. To me that’s like calling your family a collection of people or a tree a collection of sticks. “Collection” implies a bunch of disparate or unrelated things gathered up—collected, but not necessarily integrated or belonging together (and “essays” suggests that they’re freestanding items, rather than chapters). A book that is nonlinear may not be a string of pearls but it might be the facets of a diamond or the bones in a skeleton.

Of course even a lot of old novels, let alone new ones like David Mitchell’s Cloud Atlas, are not so linear. Dickens’s Bleak House and Tolstoy’s War and Peace both move forward chronologically but with a lot of lives and storylines braided together (as does Tommy Orange’s There, There and so many others I could name). Bleak House also reaches into the past to reveal the mystery of Esther’s origins, and Fitzgerald’s Tender is the Night goes back to understand Nicole’s trauma and Dick’s ambition.

There are subjects you can better understand through analogy, context, parallels, the view from the distance, rather than via direct and dogged pursuit.

Moby-Dick is a book about a quest or chase, and hardly anything is more linear than that. But Melville is not in a rush, so his tome is interleaved with musings and chapters on nautical matters and, famously, “the whiteness of the whale.” In pursuing one goal (or whale), Captain Ahab is in violation of the official purpose of the voyage of the Pequod, which is supposed to be a quest for many whales, not one. His singlemindedness is alarming until it’s catastrophic; it’s as though the book is a conflict between Melville’s and Ishmael’s broad interests and Ahab’s narrow one, as though the recursive digressions and asides are, Tristam Shandy-style, trying to delay the devastation brought on by Ahab’s obsession.

Timejumps, fragments, backward glances, and parallel subjects are familiar in novels, but somehow some readers seem to find them unrecognizable in a work of nonfiction that nevertheless constitutes a whole and is written in chapters that build on or inform each other. I’m not worried about my book but I do want everyone to recognize that structures take many forms, and God knows there are plenty of nonfiction examples out there. Primo Levi’s The Periodic Table, which narrates his life before and during his time in Auschwitz through chapters titled after the periodic elements he knew so well as a chemist, is not a collection of essays and neither is Annie Dillard’s For the Time Being, which brings together scraps of information about the same subjects again and again, like Bach’s Goldberg Variations, to explore theological questions that are never quite asked outright. For that matter, Walden is organized by thematic chapters, because there’s not much plot to Thoreau spending some time in a shack on Emerson’s woodlot. But they’re definitely chapters, united by an interwoven exploration of place and meaning.

David Graeber and David Wengrow’s magisterial new history The Dawn of Everything is roughly chronological, but it is also a brilliant dismantling of the idea that human history was itself a linear narrative—an inevitable march from innocence to corruption, from hunter-gatherers to agriculture to urbanism, from simplicity (aka primitiveness) to complexity. It proposes that human beings are instead endlessly experimental. People tried on different economic and social arrangements, or mixed them up. Some peoples tried agriculture and went back to hunting and gathering. Similarly, not only was there no inevitable evolution from one form of social organization to another, but some cultures went back and forth annually as they gathered and dispersed.

The funny thing is that Orwell’s Roses loosely proceeds according to the chronology of Orwell’s life and writing, though as the title indicates (or at least as I intended it to indicate), it’s a book about roses too, as emblems, commodities, as members of the plant kingdom, and as things tended, enjoyed, and written about by Orwell. It begins again and again, seven times in seven sections, with variations on the opening sentence, “In the year 1936, a writer planted roses.” What did it mean that this particular person planted and tended these particular flowers, right after his time amid the slums and coal mines in England’s industrial north, not long before he went to Spain to fight fascism in the Spanish Civil War?

I wanted to answer the question that act of planting roses posed, or rather to explore it, since you can broaden rather than narrow in the pursuit of meaning, and an answer is often a capstone or a terminus, part of the fiction that there is one answer rather than many. The structure of Orwell’s Roses is akin to taking seven walks from the same starting point. To explore that question meant going out into Orwell’s world and our own to situate the one act in its many contexts and possibilities. I learned from labyrinths that to get to the center you turn away from it again and again as you follow the windings that will, in the end, take you to the center. In Hokusai’s Thirty-Six Views of Mount Fuji, most of the woodblock prints show the famous conical peak, but one shows pilgrims climbing a Fuji that is the very ground under their feet. You can’t see the mountain’s form while you’re on the mountain. There are subjects you can better understand through analogy, context, parallels, the view from the distance, rather than via direct and dogged pursuit.

Timejumps, fragments, backward glances, and parallel subjects are familiar in novels, but somehow some readers seem to find them unrecognizable in a work of nonfiction.

There was a very fun moment in Ted Lasso’s second season in which junior coach Nate Shelley is worried someone else will take credit for his idea, and the laconically erudite Coach Beard replies, “You know, we used to believe that trees competed with each other for light. Suzanne Simard’s field work challenged that perception, and we now realize that the forest is a socialist community. Trees work in harmony to share the sunlight.” He is more or less observing that we are shifting from the hyperindividualism of cold-war capitalism, social darwinism, and a host of other sadly Hobbesian views to a recognition of that the world is made of interconnecteded and interdependent systems rather than isolated objects.

In a lot of fields, from psychology to economics to ecology, people are noticing cooperative and collective rather than competitive relationships seem to be how we’re wired and what works. Simard’s own work is on forests sharing underground through the mycorrhizal fungal networks she documented, which knit the trees and fungi together into an interspecies whole. Her wonderful book Finding the Mother Tree braids the story of her personal and professional life with her scientific work and its implications.

The postmodern philosophers Deleuze and Guattari proposed “Any point of a rhizome can be connected to anything other, and must be. This is very different from the tree or root, which plots a point, fixes an order.” Rhizomatic became an important word for nonlinear literary structures, but as with so much philosophy they seem to be thinking about an imaginary or ideal tree. Despite family trees and other uses of the information-tree structure, trees themselves can take many forms, and some boughs dip down to touch the earth and sink new roots into it, sometimes many trunks grow from one rootstock. An oak has one trunk but many radiating branches and sub-branches all the way to leafy twigs spreading in all directions, and I have often loved how they reach out to make a hemisphere of sorts.

Simard’s work tells us that even the trees that above ground looked like linear independent structures were often, underground, part of great dense cooperative tangles. The literary equivalent is maybe not a tangle, but a recognition that everything exists in context, that your subject may be the system rather than the individual, the network of ideas and meanings that reach out like mycorrhizal fungi to connect things and circulate their nutrients. Those mushrooms Greg and I were picking were just the fruiting bodies of great underground networks, and you probably didn’t think I could come full circle here, but I just did. I was meandering, but not lost. 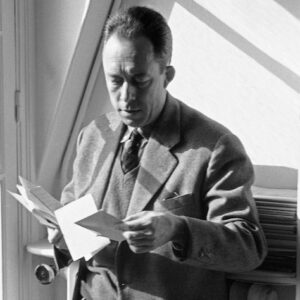