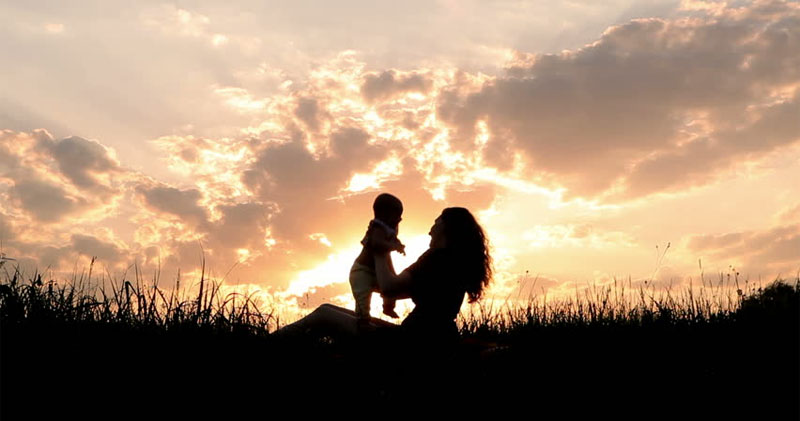 On Fierce Love, Disability, and Chimeras

Is how we mother defined by how we were mothered? I read an article in Scientific American that said the cells of a baby always remain within the mother even after the baby physically leaves the mother’s womb. Is that what it means, to yearn forevermore for the flesh that is within you but without you? When my mother’s mother died of peritonitis six months after Ma emigrated to the United States, was it her appendix that burst or her heart, cleft with regret because she knew she would never see her daughter again? When I found my son Jesse dead on a January morning and my body grew a cancerous not-Jesse tumor that weighed what he did at birth, was that the physical embodying of my terrible yearning for him, skewed and poisoned by grief? We have our mother’s cells in our bodies, and our children’s cells, too. It’s called microchimerism, after the chimera in Greek mythology: a fire-breathing female monster with a lion’s head, a goat’s body and a serpent’s tail.

“I could be fierce about a child, I know it.”

That was me, being prescient in my twenties. In the overwrought and self-pitying pages of my journal at that time, I was trying to imagine what it would be like to mother a child, a galactic leap for my immature self.

“This is theoretical. It would have to be a different life, a different time, I would have to conquer in myself that reserve I have to giving myself over to the possession, the inevitability of it all. The ordinariness.”

That was me, not being prescient. Our son Jesse was the farthest thing away from ordinary, from his extremely premature birth to his untimely death at the age of 17.

I saw Jesse moments after he was born and before he was whisked away, and I had no hesitation giving myself over to the possession, the inevitability of it all. The fierce love I had predicted in my twenties was there, as if it had always been there, waiting to be born along with him in the dramatic first moments of his arrival ten weeks early.

It would be almost two months before I held him in my arms.

My Italian mother’s reaction to the news of Jesse’s early birth was so frenzied that it had the opposite effect of calming me down, her worry washing over me like a warm bath. “It’s too soon!” she kept shrieking into the phone, her normally low voice in a register used specifically for the coffin-side cries at wakes. I reassured her, and myself, that he was alive and well, our tiny manchild in his plastic box, skin mottled and purple, strained features showing little hint of the almost surreal, lit from within beauty that would flower in the months ahead. Our first sight of our child was fearsome. The nurses insisted I sit in a wheelchair and I was dismissive, until I saw him. I understood; my legs were suddenly weak. He breathed through a tube and there were lines invading his filament veins delivering mysterious and unsettling liquids to his tiny body. A jiggling readout displayed numbers measuring oxygen and other vital signs. Despite all of this, Jesse’s medical team was hopeful: his weight was good, better than most 30 week preemies and he appeared to thrive according to the incomprehensible bleeping numbers.

All of that changed on the third day of Jesse’s life, when he suffered a grade four intraventricular hemorrhage and coded blue in our presence. Now the prognosis turned grim, and my mother’s anxious calls were nagging echoes of my own fears, sapping the strength I needed to sit by Jesse’s incubator and will him to life, the only thing I could do besides pump breast milk and stare at the incomprehensible numbers on the machines that were both tyrannizing and saving my son.

“I needed to reclaim him from the sanitized stink of the hospital, the overbearing doctors, the caring nurses, the social workers whose questions felt like intrusions.”

Finally, almost two months after his birth, we brought Jesse home. Free of the shrill machines, the over-bright lights, the thrumming atmosphere of dread, we couldn’t stop nestling, snuggling, cradling, celebrating our baby. I wore him in a sling all day, close to my heart. Ma disapproved. In one of her worry-wrought calls she fretted “you ken’ hold ‘im all day.” But I did. I held him all day and he slept with us at night, his pretty bassinet with the tiny yellow rosebuds sitting idly by. I needed to reclaim him from the sanitized stink of the hospital, the overbearing doctors, the caring nurses, the social workers whose questions felt like intrusions. It didn’t occur to me that some of Ma’s worry might be for my own stamina and health. Her disapproval seemed like a decree from yet one more official person telling me how to mother my child. I resented her. I thought she was jealous of my love being directed away from her and to my child.

But in the snapshot I have of Ma with Jesse on that first trip home to Boston with him, she is holding him across her lap and smiling as he looks up at her. She shows no fear, just love and confidence as she handles him as she would any of her other grandchildren. It is only now that I see my defensiveness mirrored back at me, falsifying what was before my own eyes. I was the one who was afraid—afraid my mother would regard my child as damaged and recoil from him.

Now that I was a mother, I thought often about how Ma had been mothered. I knew she had lost her mother when she was still a teenager, not long after she had immigrated to this country. As with anything about her own childhood, Ma had not been forthcoming except for the occasional mystifying remark. She told me once that her mother slept with her, in her bed. Was that every night? What did that say about her mother’s marriage, which I knew to be troubled to the point of frequent violent scenes. Did her mother’s unhappiness spill over to the way she interacted with her only child? Was Ma an afterthought? A burden? My mother had said, starkly, that her mother didn’t love her father.

Motherhood did not come easily to anyone in my family. My Aunt Ellie lost three babies. My Aunt Sara never had children. My mother was an only child. And my mother took years to conceive me. Specialists in Boston told her there was no hope. Ma confided to me once that she watched my father sitting alone and worried that he was thinking of his first wife, the one that died young, pregnant with his child that never was. She wondered if he felt cursed. She agonized that she might never have a child. Finally, without the help of the specialists, but with some antique version of hormone shots given by the local Italian-American general practitioner, she became pregnant with me.

In Ma’s place, I would have been giddy, unable to believe my luck at the avalanche of blessings, the lonely only child who had been gifted an entire new family that knew how to laugh, that enjoyed company, and feasting and parties and dressing up at carnivale, and to live comfortably, in peace, amidst plenty, all this while married to a man who was passionate, not violent like her father, this man who loved her without limit. And my mother was joyful, as I remember her, for the 15 years she had left of this kind of happiness, before my father died.

But there was always a wariness there, too, as if she sensed it could all be snatched away by a random and cruel destiny decreed by some barbaric and capricious god. Unbridled joy attracts the jealousy of others; their envy brings down a curse upon you if you are foolish enough to remain unprotected or show your bliss to the world. This Ma had been taught and this she believed more dogmatically and with more fervor than any tenet of the church. And she was right to be wary because after my father was snatched from her at the age of fifty, ending her world, she still had to be a mother to us all: my 12 year old brother, my seven year old sister and my sullen, contorted, rageful 15-year-old self, her greatest maternal challenge.

“I could be fierce about a child,” I wrote in my feckless twenties. Then I had a child and had to fight for his right to be regarded as fully human despite his disabilities. I became a fire-breathing female monster because I was re-birthed in the place being a mother can take you, the place you can never, ever imagine before you go there, but when you are there, it is as familiar as the walls of the womb where you once lived. 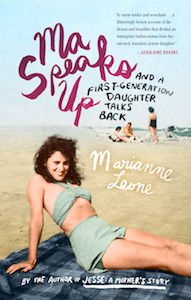 Excerpted from Ma Speaks Up by Marianne Leone (Beacon Press, 2017). Reprinted with Permission from Beacon Press.

Marianne Leone is an actress, screenwriter, and essayist. Her essays have appeared in the Boston Globe, Post Road, Bark, Coastal Living, and WBUR’s Cognoscenti blog. Her memoir, Jesse: A Mother’s Story, was published by Simon & Schuster in 2010. Leone had a recurring role on HBO’s hit show The Sopranos as Joanne Moltisanti, Christopher’s mother. She has also appeared in films by David O. Russell, Larry David, John Sayles, and Martin Scorsese. She is married to the award-winning actor Chris Cooper.

Ballast, Grounding, Subject Matter: On Writers and Their Mothers 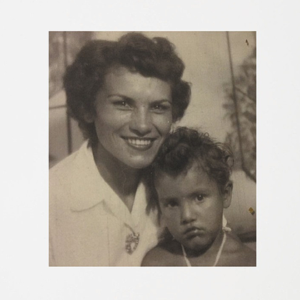 My mother was a dictionary. She was one of the last ﬂuent speakers of our tribal language. She knew dozens of words...
© LitHub
Back to top
Loading Comments...