In Defense of Worldbuilding

Or, Against Being Against Writing Tools

Last week at Electric Literature, Lincoln Michel wrote an essay about worldbuilding, “the most overrated and overused concept in fiction.” Even more overused than a dog barking in the distance, apparently. “What once was a term used for a certain strain of second world fantasy fiction,” he writes, “has spread across cultural criticism, and is heard in university literature classes and video game reviews in equal measure.” Well, egad! Could a term developed to describe something done by fantasy novels really be used in universities? Consider my pearls clutched.

I’m joking, because I know what he means. It may be that I only really disagree with Michel on one point—but it’s a big one. “Some people will argue tautologically, that all fiction takes place in a world and thus all fiction worldbuilds,” Michel writes. Why hello, yes, I am one of those people! I’m not convinced by Michel’s assertion that “worldbuilding” refers solely to the exhaustive detailing of a rationalized universe, or that “in a perfectly executed work of worldbuilding, there would be no gaps in the world for the reader to fill in. Everything from the goblins’ favorite type of baby wipes to the export taxes on Martian ray guns would be worked out (at least in the author’s mind if not on the page).” This may be the way worldbuilding manifests in some kinds of epic fantasy, and it may even be what the term meant when it originated, but for the very fact that it is being used in such a variety of settings and to refer to a variety of media and genres, we have to admit that it has come to mean much more than that narrow description implies.

Worldbuilding as I understand it is integral to my reading experience. But I’m not talking about goblin baby wipes (although, actually, I’m interested in those, because I’m a nerd). When I use the term worldbuilding with creative writing students, I use it to mean the existence of an internal logic, mood, or yes, set of descriptions that gives their work a sense of context—which may or may not be a spatial or historical context. For instance, I find the voice in Claire-Louise Bennett’s Pond to be as much a kind of worldbuilding as her descriptions of the landscape, because the world of the novel has so much to do with her mind. Michel mentions Kobo Abe’s The Woman in the Dunes as a novel that would be ruined by worldbuilding, and he’s right that it would be ruined by any more worldbuilding, but honestly Abe does a fairly thorough job of building the world of the hole, which is also the world of the novel. It’s a monotonous world, but it’s a complete one. This is only true if you subscribe to a wider definition of the term, of course.

But ultimately, Michel’s beef is not even exactly with worldbuilding as he describes it, but with the tyranny of its application, particularly in advice columns for beginning writers. He calls worldbuilding “a largely counterproductive concept for most types of fiction” and argues against “applying the rules of certain types of science fiction and fantasy to all types, and beyond.”

Michel is right: no one should feel compelled to create lists of irrelevant details because of some oppressive Internet overlord. Actually, I have good news: literally nothing is required from fiction. Every “rule” is breakable. “The main reason I think worldbuilding has become a problem,” Michel writes, “is that it leads people to believe that ‘realism’ is the primary point of fiction, even fantasy fiction. But representing reality — whether ‘real’ reality or a fictional one — is simply one way of telling a story.”

Well, we’re always representing a fictional reality. Even stories set in a “realist” world require actual worldbuilding—because “realist” fiction is still fiction and not “reality,” and by the way, no one experiences the same “reality” anyway, so you can’t assume that even actual “reality,” the one you’re walking around in, looks the same to the person standing next to you. A completely straightforward work of realism for one person might read as a fantastical story for another. See also: Orientalism. (I do want to say that I’m completely on board with irritation towards people who think “realism” is the primary point of fiction—I just don’t think that’s what encouraging students to worldbuild does.)

But nitpicking aside, I think most people actually do understand that not every kind of story is served by a laundry list of detail, and if they don’t, they’ll figure it out in short order. The better kind of worldbuilding has something to do with the creation of an internal logic, and in general, stories should have internal logic, even if their internal logic is to be illogical. Even surrealist or impressionistic stories have internal logic—it’s just different. But the logic is what makes something a story and not a random collection of images or sentence fragments. Kathryn Davis builds a world in Duplex, a surreal and episodic novel that seems to be constantly shifting gears—the instability is part of the world of the novel (distinct in this case, mind you, from the novel’s setting).

I too remember a high school creative writing class in which I was told that I should know all of my characters’ telephone numbers. But now I see that kind of advice for what it is: a shorthand used to try and trick fully-realized characters out of inexperienced writers. The thinking being, if you know your character’s phone number, you might also know what her relationship with her parents is like, what her secret dreams are, who she loves most in the world. “But,” Michel asks, “do we need ‘worldbuilding’ as a concept to explain why moral simplicity, characterization without nuance, or a lack of a tactile sense-of-place can be a problem?” Well, yes. We need whatever term will work for whatever writer at any given time. If we widen our understanding of worldbuilding—and most of the guides Michel links to do have rather wide versions of the term—and use it to refer to a fictional universe characterized by complexity, nuance, a tactile sense of place, an internal logic, a story that fulfills its own promise, then why not?

In writing this, I thought of a piece of writing advice from Stephen King that I read long ago: “Most of these rules—and the four hundred I haven’t quoted—will take care of themselves almost automatically if you will, from this point on, take two pledges: First, not to insult your reader’s interior vision; and second, to see everything before you write it.” Worldbuilding is essentially about the latter—its primary function is to give yourself enough knowledge about the story that you have the authority and ability to tell it to somebody else. I think what Michel is getting at with “worldconjuring” has to do with the former.

But for me, “worldbuilding” and “worldconjuring” are the same thing. As with anything else, it’s just a matter of what tools you’re using, and how you’re using them, and what kind of castle you’re trying to build. 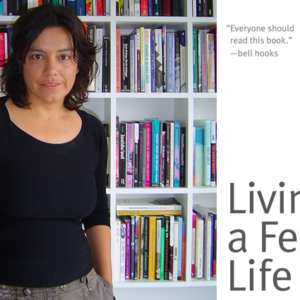 Adam Fitzgerald: In the introduction “Bringing Feminism Theory Home” to your new book Living a Feminist Life, you foreground...
© LitHub
Back to top