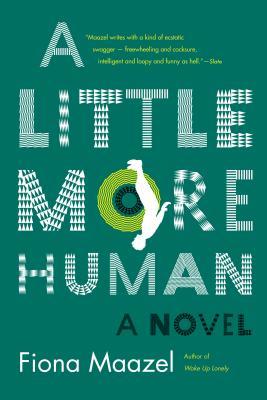 The following is from Fiona Maazel’s novel, A Little More Human. Maazel is the author of Woke Up Lonely and Last Last Chance. She is winner of the Bard Fiction Prize and her work has appeared or is forthcoming in the New York Times Book Review, Harper’s Magazine, Ploughshares, and Tin House. She lives in Brooklyn.

Every morning of Phil’s life for the past two years: coffee, toast, tweeze. He was not vain about his dress, and there was not much he could do about the architecture of his face. But he could tend to the rest, so he tweezed his unibrow and shaved his head and greeted these rituals with pleasure (I care about myself!) or frustration (My life is so boring!), depending on his mood. But this past week, he’d left off his habits, so his hairline, already receded halfway up his head, had turned black, and the wedge between his brows was tarantula. Except he was too hungover to care. If he even made it home in the morning, there was time enough only to grab his scrubs and head to work, certain each day would be his last as a free man.

Why all the drinking? Because he had the idea that if he could just re-create the conditions of that night, he could re-create its experience. Maybe not the best logic, maybe not even logic he believed, but logic that provided a decent pretext to get drunk. So he’d go to the Bavarian beer hall and parade drinks down his throat in various orders and quantities, the upshot being a lot of vomit and another night gone by. He’d wake up on a bench and remember everything but the woman in duress.

The day he got the photos, he’d asked Lisa about his suit. She’d kept it, right? He was wearing it the day Clem was born, so she’d kept it?

“Like you care,” came the response. Because, no, she’d tossed it. It was bloody and torn, and was that what he really wanted to remember of the birth? No? Then go buy some diapers or just get out of here.

And then she’d turn away, unsure of what she’d say next. After all, the spectrum of her moods bore no relation to the one she routinely shared with him, which was rage. She’d ruined their marriage in order to start a family. The irony was thick as tar, and it was everywhere. Some people swam through their lives—with the current, against it, thus the pageantry—but Lisa swam through tar.

All her clothes were ruined. Her skin was clogged. Often, she could not breathe. The irony! But there was no going back, and though she could not see a way forward, she continued to pump her arms and kick her legs and chuff through the days, hoping Phil would forgive her and love their baby and stop asking about his idiot space suit, or whatever it was. Because, no, she didn’t respect this new pastime of his or even want to probe it for news of the man he’d become since she’d betrayed him.

The upshot was that Phil had not been able to examine the suit. Or, who knows, test the blood, though he had no idea where he could test anything. A private lab? He’d seen plenty of crime shows on TV, enough to know that DNA in dried blood is resilient. Maybe he’d get a pop in the system. Ha, a pop. He even had the lingo down, though he had no real sense of what it meant. The woman he may or may not have assaulted in some kind of rage apropos of the hurt his wife had caused him—this woman might be in the system? He didn’t really know what that meant, either.

This morning he woke up at home, but Lisa and the baby were gone. He’d come home because he needed an alarm clock—three tardies in two years and he was on probation—but also because he needed to have his head on straight. The bartender who’d been on shift at the bar that night had been on vacation ever since. But now she was back. And he planned on taking his lunch break with her. He’d left several messages for her at the bar, and when she finally called, she left him a voice mail. In gist: she did remember him and would be happy to tell him all she knew. He’d listened to her message multiple times. He cherished its implication. All I know. She’d said these words cheerily enough, but he was prepared to hear in them the promise of freedom. Exoneration. Because he could not go on like this. Knowing nothing without hope of ever knowing more. The woman who’d approached him at the toy store had not shown herself again. Nothing had come for him in the mail. He was paranoid about being followed, so he drove well out of his way to get to work—he’d have been late even without the all-nighters—and had taken to leaving the phone off the hook when he could. He read all the local papers, but there was no mention of any woman assaulted in the park, just the Swimmer and his missing face.

He looked at himself in the mirror. Looked into his own eyes, but for too long, such that he started to feel unsure about what he was seeing—not that he didn’t recognize himself so much as that he wasn’t confident what he saw was a face at all. He put on a baseball cap and scrubs, and when he checked himself again in the mirror, everything was fine. He headed for the SCET. It was a ten-minute drive; it took him thirty-five.

They were in the locker room. You were not supposed to come to work in your scrubs. If you did, you had to swap them out for a sterilized pair, depending on what floor you were assigned. Most of the time, Phil worked with the patients. Some of the time, he questioned what he was doing here. He’d never wanted to work at the SCET. Growing up, he’d had ambitions only to be unlike his parents. They were neuroscientists; he’d be a photographer. They were neuroscientists; he’d be a pilot. But then, for spending so much time at the SCET, he got used to it. His parents were neuroscientists; he was a summer intern. And then he was taking classes and getting certified because once on this path, it seemed like the only one available to him. The good news was that he liked the patients. It was hard not to find them interesting or to be induced to compassion in their presence.

They all had nicknames that sounded awful but were actually endearments. The SCET encouraged these familiarities. Trauma wasn’t to be laughed at but laughed with. So there was Half Head, in 216, for whom the left side of the world did not exist. He’d look at a picture of a child, then draw half of him. He’d been slammed in the right parietal by shrapnel from an IED on BIAP Road in Iraq, and ever since then, he refused to notice his left arm. Meantime, the SCET was activating his parietal lobe with transcranial magnetic stimulation. In room 480: Two-Way, whom Phil had nearly hurt so many months ago. He presented with corpus callosum syndrome, plus alien hand, thanks to a left pericallosal brain lesion. La main étrangère was weird and comic and horrible but still less striking than Two-Way’s other symptoms. He’d named the hand—or arm, really—Winston, after his brother, who’d been in and out of jail for years. Winston was unruly. It answered only to the right side of Two-Way’s brain. It tried to rouse his genitals in public. It was symptomatic of a brain whose hemispheres could not communicate. In a normal head, the dominant half tells the other to knock it off, and that’s that. The weaker side isn’t conscious, doesn’t have ideas or the ability to form concepts, so the master-slave arrangement seems fine. Only it wasn’t fine. Because the thing about Two-Way was: each side of his brain appeared to have different feelings, desires, and ideas about life, which were discovered just by asking the right questions and in the right way.

In most people, the right side of the brain cannot verbalize with conscious intent. But Two-Way was different. So researchers at the SCET began talking to his right hemisphere by mixing verbal questions with keywords written down and shown only to his left eye. For instance, someone might say: “Do you like your . . .” and then flash the word mom in his left visual field, thus ensuring that only the right brain had all the necessary info to answer the question. Course, the right brain can’t talk. But Two-Way’s right brain could direct his left hand to make words out of Scrabble letters. So: Ask the left head if he liked his mom and Two-Way might say yes. Ask the same of the right, and he might spell out N-O. But what really stood out in the testing was when they asked Two-Way what he wanted to do when he got out of the SCET. Left brain said: “I want to go back to work as a bank teller. It’s all I’ve ever done.” And it was true. Two-Way was a self-contained, quiet man. But when his right brain was asked the same question, it spelled out: V-I-D-E-O-G-R-A-P-H-E-R. Good God. Two-Way’s right brain had totally different desires. Desires that had been hidden from him but that were very much there. Not unseemly desires, not desires worth repressing for their repercussive quality, just normal desires. What else did his right brain want? What else did it think? And what did this mean for the rest of us? You say you like x, believe x, feel x, but it’s entirely possible that half your brain actually feels y. Was everyone really two people, one of whom had simply been gagged by evolution?

The thought terrorized Phil, especially now. The stranger within was a literary concept. A Freudian concept—the unconscious. But now it was science. And now it was Phil. The stranger in his head who had begun to do things at odds with who he had thought himself to be—that stranger scared him to death.

In Defense of Worldbuilding 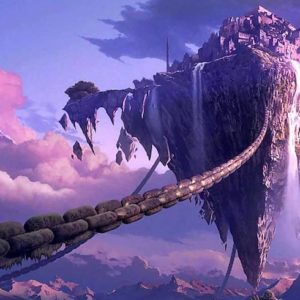 In Defense of Worldbuilding Last week at Electric Literature, Lincoln Michel wrote an essay about worldbuilding, “the most overrated and overused concept...
© LitHub
Back to top