R.O. Kwon on the Beauty Of 'Walls of Paged-Through, Dog-Eared Beige.'

Here’s a fundamental truth about my life as a writer and reader that might offend my fellow bibliophiles more than anything else I could possibly say: for over two years, I arranged all my books spine-in.

I’ve gathered that this is a controversial declaration, and that I risk inciting upset, even outrage. When, earlier this year, various publications reported on a growing trend of books shelved spine-in, many writers I know—who, by and large, are fairly big-hearted, tolerant people, respectful of differences, wary of orthodoxies—collectively lost their shit. Disgraceful, they said, appalling. No one who authentically loves books does this.

Well, I’m here to say that I live for books and also once kept them spine-in. What’s more, though I’ve since reversed this arrangement, I’m finding I dislike the change. It’s possible I want to go back. I pine after walls of paged-through, dog-eared beige.

The truth is, I loved it.

It began when I positioned my writing desk in front of a bookcase, the one in the corner of my living room. It’s the room that houses a majority of my books; it would be good, I thought, to have my writing space so close to most of my books. Books are made of other books, and so on.

In a little while, though, I realized the books facing me were too, well, in my face. Every time I glanced up from my own novel-in-progress, there they were, making colorful, even jostling bids for my attention—after all, hadn’t the publishers designed these books with the hope that they’d catch readers’ eyes? They were bright and hectic, clamoring. “Look at me,” they shouted. One day, sick of staring at the titles shelved in two rows directly in front of me, I flipped them around. I still knew where they were; I couldn’t forget, having gazed at them so long. But now, when I looked up, at least they weren’t yelling.

Before long, I felt compelled to turn around the rest of titles in that bookcase as well: a tall, five-level unit, it made too visible the contrast between spine-in and spine-out books. It clashed! But united, all in beige, there was calm, harmony. This was just one corner of the living room, and my other books were lined along different walls. I figured I’d made the final, big change. I kept writing. I was four, five years into my first novel.

Reader: it wasn’t final. Late one night, or early morning, I woke up, feeling unsettled. I’m often insomniac, and I’ve learned over the years that when I wake up, I might as well work; some of my best writing happens in these hours, in the quiet. But this time, when I went in the living room, I discovered I didn’t want to write. I looked at my books, and they stared back at me: all those bold designs, the harlequin colors. I started turning them around. I was partway through when my husband came in, and asked what I was doing.

“I want all the spines turned in,” I said, a pile of books in my arms.

“Okay,” he said, and, without asking any further questions, began helping me.

To respond to the most frequent question—yes, I could find my books. They’d been in the same place long enough that I knew, more or less, where they’d be; plus, alphabetical by author, they weren’t hard to find. It never took me more than two tries to pull out the right title, and often I did it in one.

And how satisfying it felt to know that I alone, in all the world, knew where to find my books. How exquisitely private. I knew them not just by their public fronts, but by their backsides, by small variations in size, hue, and shape, by the texture of their pages. Deckled vs. flat. Fawn-colored vs. almost white. I loved my books, and I could prove it: I knew them as intimately as Odysseus’s nurse had known his naked leg. I could identify them based on almost nothing.

“One day, sick of staring at the titles shelved in two rows directly in front of me, I flipped them around. I still knew where they were; I couldn’t forget, having gazed at them so long. But now, when I looked up, at least they weren’t yelling.”

Still, I assumed this was a temporary situation. If nothing else, my friends’ ongoing distress indicated I had to change my setup. Almost everyone who came to my apartment asked about the bookcase situation, and many expressed alarm. Once, as I was returning from the kitchen with refilled glasses of wine, I heard one old friend whispering to another, newer friend, “Well, the thing is, she’s been working on her first novel a really long time.”

Wondering if I should change my life, I surveyed friends about their methodologies. One organized her books by category, another by subject, a third by title. One, by publishing imprint. (“I just wanted all my New York Review of Books paperbacks to hang out together,” she said.) There were multiple by-color people. I read about other writers’ systems, and came across an organizing principle that sounded promising for maybe 0.03 seconds before revealing its true identity as an idea from hell: the desert-island method, from least expendable to most. (Imagining deciding, with each new book, exactly where it should be slotted!) (Imagine trying to explain this to one’s writer friends.)  None of these sounded right for me.

I thought of what Georges Perec had said, that “every library answers a twofold need, which is often also a twofold obsession: that of conserving certain objects (books) and that of organizing them in certain ways.” Alphabetical by author, my previous method, now felt, to me, too boring. Unserious. Too obvious, and not sufficiently loving. I read, and reread, Anne Garréta’s delightful compilation of potential bookcase taxonomies, ranging from the quite practical (“books by people you admire hold or held in high esteem”) to the wild (“books in which Danish princes would be liable to find nothing but words, words, words”). Three of Garréta’s proposals are entirely, splendidly cetological: (1) “books in which one encounters whales,” (2) “books in which not even the shadow of a whale is to be found,” and (3) “books from which have disappeared, inexplicably, the whales one imagined there.”

Eventually, I thought I’d hit upon a feasible system: by publication date! This, I imagined, would be satisfyingly varied. From my library, I’d develop my own, idiosyncratic sense of literary history. I got as far as one shelf. I couldn’t decide which publication dates should take precedence. Date of first issue, yes, probably, but what about important new translations of old work? What was one to do with the Bible? The Iliad? New editions? What, indeed, to do with all my own New York Review of Books paperbacks, many of which are reissued titles?

Bested, in utter despair, I flipped the books on that shelf around again.

In time, reality intervened: a couple of years ago, I had to leave my apartment for a month, and bring all of my belongings with me. Moving out, then moving back in, shuffled around my books; spine-in, I could no longer be sure where they were. I left them spine-out, promising myself I’d organize them somehow, one day, soon. But I haven’t, not yet.

As a result, I can barely look at most of my books. Increasingly, I find that keeping a book at all, rather than giving it away, is a serious pledge of trust, fidelity—of, in fact, love. Each time I elect to keep a book, I’m saying, I want you in my life. If I’ve read it already, I’m holding onto it because I suspect I’ll want to reread it. If I haven’t read it, this means, surely, that I intend to do so.

Nowadays, each time I let myself look at my bookshelves, questions proliferate. I wonder which I should cull, what’s worth keeping. I mull over my literary deficiencies. I glance at Ada, or Ardor, and am once again stricken, asking myself why, how, I haven’t finished it. Will I ever get through that novel, and if not, what kind of extraordinarily fraudulent Nabokov-lover am I? What’s with my gigantic copy of The Anatomy of Melancholy, almost as wide as it is tall: did I really believe I was going to read 1,382 pages from the year 1621 about sadness? Perhaps I’ll get rid of it. But no, maybe I’ll read it! Should I? And what, exactly, was I thinking when I purchased Thomas Bernhard’s entire oeuvre? I admire him, I do, but—all of him? Here’s beloved Woolf: how I wish you’d had the time to write more books. Ditto, Theresa Hak Kyung Cha. Audre Lorde: you, too. I’ve just published my own first novel, The Incendiaries, ten years in the works. Good lord, where will it go?

Amidst such chaos, I fantasize about the way my books used to look, their titles hidden, their exact location known just to me. It was so calm and so private. It was beautiful, and, for me, perhaps, the only way.

R.O. Kwon’s first novel, The Incendiaries, is out now from Riverhead. She is a National Endowment for the Arts Literature Fellow. Her writing has appeared in NOON, The Guardian, VICE, Time, Electric Literature, and elsewhere. She has received awards and fellowships from Yaddo, MacDowell, the Bread Loaf Writers’ Conference, the Sewanee Writers’ Conference, Omi International, and the Norman Mailer Writers’ Colony.

When You're Asked to Design a Cover After Others Have Tried... 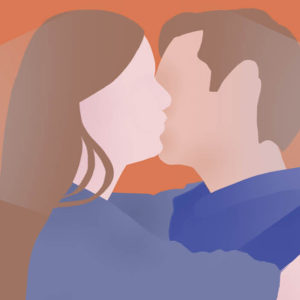 When You're Asked to Design a Cover After Others Have Tried...

One of the most stressful experiences as a designer is when nothing seems to be working. There are times when everything...
© LitHub
Back to top