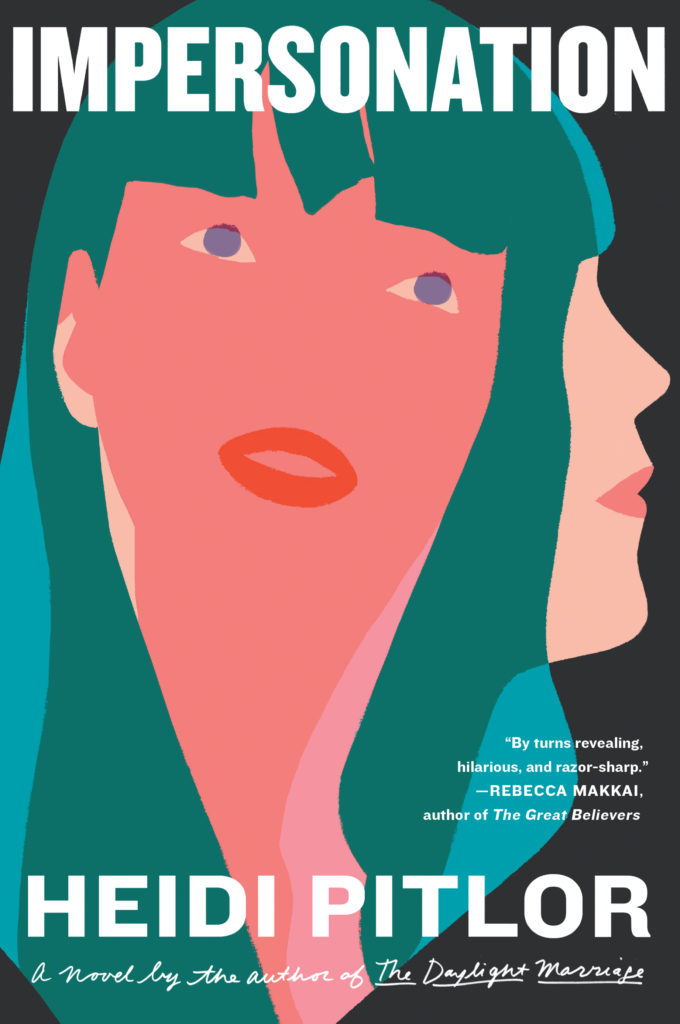 The following is excerpted from Heidi Pitlor's new novel, Impersonation. Pitlor is the author of the novels The Birthdays and The Daylight Marriage. She has been the series editor of The Best American Short Stories since 2007 and the editorial director of Plympton, a literary studio. Her writing has been published in the New York Times, the Boston Globe, the Huffington Post, Ploughshares, and others.

In January of 2016, my agent called me about a new book. I may as well have won a lottery; the money was multiple times what I had earned for any of my previous jobs. And Nick Felles would easily be my most well-known client. I hardly believed Colin at first.

“It’s true,” he said over the phone. He himself would take home 15 percent. “Now go buy yourself a spa weekend.”

I did not tell him that I had more pressing needs than a pedicure and a facial. It was approaching two years since my last book, a memoir for Connecticut congresswoman Betsy McGrath. What savings I had were fast disappearing. I had my side jobs landscaping and substitute teaching, work I did to fill in the gaps between ghostwriting jobs, but it had become tough to cover costs. My car had recently died. I woke each morning with thoughts of doom.

After we hung up, I went for Cass. “We can finally buy you a big-boy bed!” I held him tightly, as if to press all of my relief into his small body and soft face.

We had just begun potty training, and I raced him to the bathroom.

A month or so later, I drove a beautiful preowned Toyota Tacoma with a double cab off the grounds of the car lot, Janis Joplin’s “Get It While You Can” blasting from the speakers. I had left a straitjacket of a corporate writing job in Manhattan a decade earlier in order to move back to my hometown in the Berkshires and become a freelancer. I worked in my kitchen; I made my own hours and rules. If I wanted to, I could wear an old T-shirt and pajama bottoms every day.

I was living life on my own terms, and as I came to a stop at a red light, I thought at long last, I was reaping the benefits.

I had never settled into a mediocre relationship. I had a sweet, lovable son all to myself. I was living life on my own terms, and as I came to a stop at a red light, I thought at long last, I was reaping the benefits. I was the only person I knew who had never seen Skinwalker Ranch, Nick Felles’s TV series about shapeshifters, UFOs, cattle sacrifice, and a coven of bombshell witches. Before we spoke, though, I watched a season, and while it was more violent than my usual fare, Ranch, as Nick called it, did hook me with its cliffhangers, its seamless meshing of the ancient with the futuristic, its attractive cast that was frequently shown nude.

“How did you come up with the idea for the show?” I had asked him on our first phone call.

“I’ve always been into the supernatural,” he said. I began to record our conversation, as I had told him I would. “I inhaled Tolkien as a kid. And I’m fascinated with primitive violence, I mean, what raw force really looks like, domination and justice between two people, you know? Are you a real warrior if you just push a button or tell someone else to drop a bomb? So I thought, ‘Get rid of the guns and the bombs and the drones,’ and on my show, I’d just have pure human power. Mano a mano. It was important to me to braid this violence with a lot of fucking.” I was about to interject “Why?” but he quickly continued: “Can I be real? What’s more objectively beautiful than two bodies doing it? Hello, why do you think the great artists painted so many nudes? Picasso said that sexuality and art were basically the same thing. He’s one of my muses.” Nick paused again briefly, as if to allow me to ask, “Who are the others?” but then he went on. “Picasso and Tolkien, and Bukowski and Kerouac. Oh, and women. Can a whole gender be a muse? Why not, right? But, you know, I’m no sheep. If you asked me which actress I would do from any time in history? I’d say, Hell no to someone current like Dakota Fanning or Kristen Stewart, I mean before she switched teams. Give me Linda Harrison back when she played Nova in Planet of the Apes. Give me Mia Farrow from Rosemary’s Baby.” He cleared his throat.

I tried to clear mine and think of how to suggest he consider ways to shroud his id. It might have been more effective to joke with him in a pointed manner, but he hardly sounded like a person who would laugh about himself.

“I guess I just wanted to get at the dotted line between sex and violence, you know, love and hate. I had this idea of a story that put man against woman against animal against self against the occult in a hot pandemonium. In my earliest visions of Ranch, Ancient Rome met this kind of futuristic frontier territory. I could see it all in my head before I met with the suits at the studio. The rest, as they say, is history.”

I thought of Cass, and the fact that human beings required food and shelter. The money from this book would give us one very good year— even more if I was careful. If nothing else, I reasoned, Nick spoke as if I were already his friend, and his openness would only make writing the book easier.

No one could claim that Nick Felles suffered from a dearth of audacity or good luck. He had gotten into TV soon after his video game franchise, Honor Code, had exploded onto the marketplace, outselling even some Grand Theft Auto games. With the hope that I might see a different or at least more nuanced side of my new client, I tried playing Honor Code on a friend’s son’s PlayStation, but I couldn’t even pass level one. Within seconds, a woman soldier in a black bikini appeared, the words sexy cherry572 floating above her head, and ripped off both my arms and exploded my head like a ripe melon against my opponent’s fortress wall. She then stomped all over my brain matter.

“Your parents let you play this game?” I asked Connor, who was eleven. “How are you able to win?”

“Maybe you just need to practice more or be, like, younger,” he said.

By the time Nick was 27, he had won three Video Game Awards, three Emmys, two Hugos, and had bought himself a modern 5-bedroom in Malibu with an infinity pool and views that stretched from the Santa Barbara Islands to Point Dume. How many other people, he said, could claim to have done any of these things before the age of 30?

He sent the thinnest of drafts for me to fill out, and on the page, he came across as even more shameless than he had over the phone. I got to work and tried to make him more likeable wherever I could. I gave him a larger appreciation of his vast fortune. I played up his relationship with his mother and dialed down his many public escapades with a South American model. I opted not to include the monologue that he had delivered to me about the ideal nipple size.

Over the following weeks, I was relieved to learn that Nick had another side, a surprisingly kindhearted one. He donated big money to the NAACP and Boys Town, as well as Planned Parenthood. He was curious about me and how I had gotten into ghostwriting, and about Cass, too. We had a long conversation about the need for more diverse characters in certain children’s programming. Most of my previous clients treated me more like a therapist, a husk of a person whom they could trust to be gentle with their truths. Very few asked anything about my son or my life.

After I sent him a few chapters to make sure that I was on the right track, he texted: Dude, u made me sound like a twinkle bitch.

Can I ask what you mean by ‘twinkle bitch?’ I replied.

He wrote, A douche-nozzle. An ass-hat. Just keeping it real Allie cuz we are friends, right? The part about my fans was good. But u probably wouldn’t use the words “twinkle bitch” just like I would never say “My life has been a series of precious gifts” or “As I look out over the ocean sunset, a glass of wine in my hand . . .” I told u I’m a whiskey guy. Can u add a huge amount of sack?

Any response that is less than stellar about your writing can, in the moment, be diminishing. Once the sting of his blunt criticism passed, I tried to think of how to reply. I had already written for a man whose oil company was later sued for actively covering up climate-change science. Was Nick any worse for this planet than Bob Smelnick? Finally, I texted, Tons of sack coming right up!

I could not have had less in common with Nick: I was a newly solvent forty-three-year-old who preferred British TV mysteries to Skinwalker Ranch, weed to whiskey, Bob Dylan to Kanye, books to video games, privacy to ostentation. But ghostwriting is a form of acting, method acting really, as well as improvisation. You must become your subject, whether they are a Kennedy, a congresswoman, or a guy who espouses anarcho-primitivism and might frequent urbandictionary.com.

I had to start thinking more like a man. No one was asking for grace or modesty here. I had a son to support, as well myself. And I had never worked with Nick’s editor, and for all I knew, he was cut from the same cloth as Nick.

I downed a mug of black coffee and returned to the so-called drawing board.

Excerpted from Impersonation by Heidi Pitlor. Copyright © 2020. Reprinted with permission of the publisher, Algonquin Books.

Behind the Mic: On Memorial Drive by Natasha Tretheway, Read by the Author 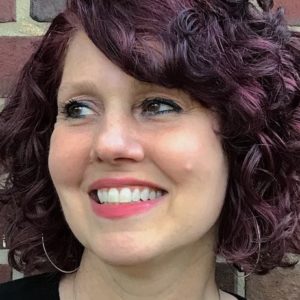 Laura Ruby on Hunger, Wolves, and Consciousness Francesca and Toni are brought to the orphanage when their mother suffers a breakdown and dies, and their father gets involved...
© LitHub
Back to top