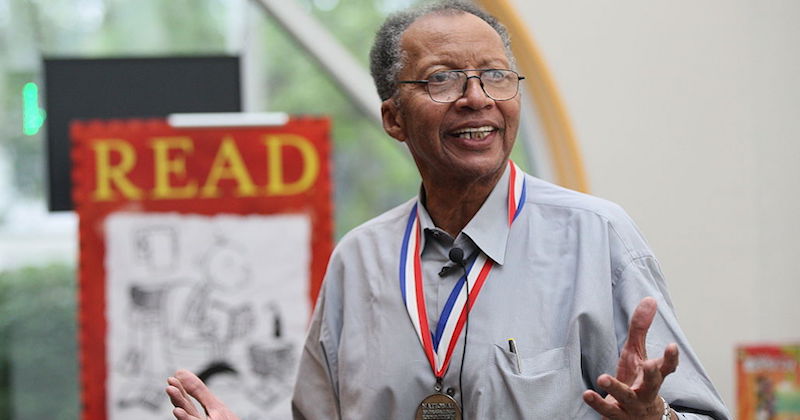 “I’ll take my characters to bed.” Walter Dean Myers on his writing process and routines.

On this day in 1937, the prolific author Walter Dean Myers was born Walter Milton Myers in Martinsburg, West Virginia. The three-time National Book Award finalist was known for his realistic, groundbreaking, affecting portrayals of the Black urban experience, which did not shy away from critically examining racism, anti-Blackness, class, and coming-of-age struggles. Monster (1999) was adapted for film in 2018 and featured Kelvin Harrison Jr., Jeffrey Wright, Jennifer Hudson, Jennifer Ehle, and John David Washington.

When Myers was two, his mother Mary Green died; he was raised in Harlem by his father’s ex-wife Florence and her husband Herbert Dean. The author’s childhood was grounded in church and his community. “The neighborhood protected me and the church guided me,” Myers has written on his website.

Myers, who had a speech impediment, found great refuge in books. His love of reading was formed at an early age, with memories of his mother reading to him while he sat on her lap. Myers credited reading as an outlet that “pushed me to discover worlds beyond my landscape, especially during dark times when my uncle was murdered and my family became dysfunctional with alcohol and grief.”

He attended P.S. 125 and JHS 143 but dropped out of Stuyvesant High School. (For the record, Stuyvesant now claims Myers as a graduate.) He joined the US Army on his 17th birthday. After his time in the service, he drifted, attempting to find a sense of purpose. Remembering the encouragement of a high school English teacher, Myers started to write at night. He also wrote short columns for a local tabloid and stories for men’s magazines.

In 1969, Myers earned professional recognition that paved the way for a career in literature. His story “Where Does the Day Go?” won a Writers Digest contest sponsored by the Council for Interracial Books for Children.

Throughout his 45-year career, Myers routinely garnered well-deserved critical acclaim. His accolades include the Margaret A. Edwards Award for lifetime achievement in writing for young adults, two Newbery Honors, and the American Library Association Best Book for Young Adults. He is a five-time winner of the Coretta Scott King Award, and served as the 2012-2013 National Ambassador for Young People’s Literature, with the platform “Reading Is Not Optional.”

So, considering this impressive track record, you’ve got to wonder how Myers got it all done, right?

Unlike some of us who are less disciplined (I’m outing myself here), Myers kept a pretty methodical writing routine, which he explained in a video for Goodman Media. He was adamant about writing five pages a day, five days a week. His writing hours were typically between 4:30 am and 9 am. He also kept outlines, which helped test out the stories he wanted to write. If the one-page outline seemed to work, he would then create a more detailed outline, and then break that outline down into scenes. Something “physical” had to happen in each of these scenes.

Another helpful habit? Keeping a handy character guide, complete with photos. Myers would look at magazines and newspapers to get visuals of his characters and to help shape their personalities. His wife would gather all of these clippings and arrange them on a big piece of cardboard, which would hang on the wall behind his computer.

“I’ll take my characters to bed,” he said, noting that his character guide notebook would accompany him even when he went to sleep.

Even though my freelance work tends to stay in the land of pop culture criticism and the occasional piece of creative nonfiction, I admit I’ve never been that good at making outlines or being diligent about creating character sketches. The closest I’ve come to following a strict routine is throwing all the website links I’ve used for research into a running Google doc. Oh, and while I can listen to music while I write, there are certain genres and artists I can’t listen to because it messes up my train of thought. But I kind of like Myers’s character field guide, which doesn’t seem that much different than creating a mood board or a dedicated Tumblr.

Myers died at the age of 76 in 2014. His son, Christopher Myers, is an award-winning author and illustrator, who often collaborated with his father.

In 2016, We Need Diverse Books created the Walter Dean Myers Award for Outstanding Children’s Literature to celebrate the late author’s life and legacy.