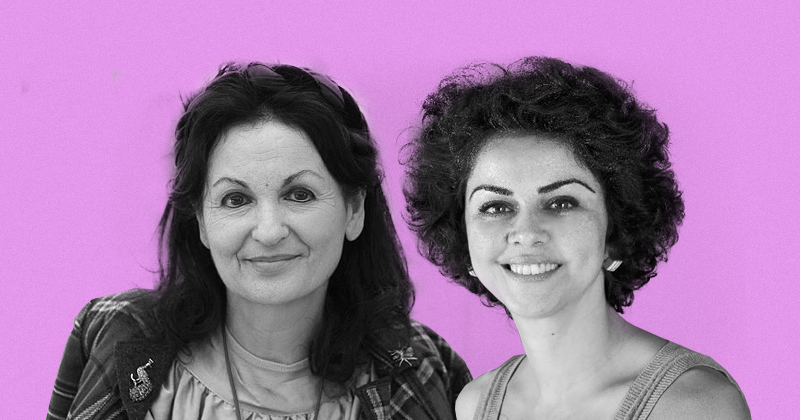 Identity, Desire, Sex: On Breaking Taboo, in Memoir and in Fiction

A Conversation Between Hanan al Shaykh and Kamin Mohammadi

Kamin Mohammadi first met Hanan Al Shaykh at the Jaipur Literary Festival in 2012. “I think on the first morning,” Kamin says, “I remember I ran up to you and wanted to kneel at your feet, I was so excited. But you surprised me so much by saying—‘Ah I’m so excited to meet the author of The Cypress Tree, I must tell you how much I love your writing!’ I feel like I fainted inside, even if I kept my composure. I knew that we are from different generations and I was ready to be this very respectful ‘good Iranian girl’ to my elder but you were so lovely, and warm and anarchic, I felt like we just giggled our way around the festival!” Mohammadi is the author of Bella Figura: How to Live, Love, and Eat the Italian Way (out now with Knopf) and The Cypress Tree: A Love Letter to Iran. Al Shaykh is the author of the short story collections I Sweep the Sun Off Rooftops and One Thousand and One Nights; the novels The Story of Zahra, Women of Sand and Myrrh, Beirut Blues, and Only in London; a memoir about her mother, The Locust and the Bird; and most recently The Occasional Virgin, out now from Pantheon. They spoke via email.

Hanan Al Shaykh: I must tell you that while reading your memoir, Bella Figura, I kept wanting to tell you that you reminded me of the characters in my new novel, The Occasional Virgin. You’re almost the same age, went to Italy (they to the Italian Riviera, you to Florence). You were all looking for love, meeting Italian men, revisiting your younger selves and the countries you had left behind in the Middle East because of war and upheaval. My characters, Huda and Yvonne, left Lebanon and you Iran; you’re all living now in the West, grappling with your identities, old baggage and religion. The three of you are trying to find harmony and peace. Also the three of you are achievers and successful. Am I correct?

Kamin Mohammadi: Hanan, you are so right! Your Huda and Yvonne are such vibrant women, and Italy seems to bring out all their passion. I think in a way that’s what happened to me in Italy, too—it’s as if the country is so celebratory of drama and passion that it gave me permission to really embrace that side of myself which in the UK I was always battling to hide and keep under control. To not feel shame because I am loud and dramatic. English Kamin is entirely more reasonable. And it’s no surprise really, Italy is the home of opera! They love big, over-the-top emotions! Really they are so much like us Middle Easterners.

HAS: Reading your book reminded of the diaries of Anaïs Nin, who was totally frank about her sexuality. People say I am quite a daring writer the way I write and talk about my characters’ sexuality. But I might be hiding behind my characters, while you’re quite direct and open in the way you describe your emotional aspects with men, not only in talking about desire but describing your love-making as well! Has living here in London since you were nine years old and writing in English had something to do with it? I am sure that you agree with me that being Middle Eastern and from Muslim families has nothing to do with being so daring and frank or writing about your own sexuality. I know Western women writers who are embarrassed to write about sexuality the way we both do.

“I think in a way that’s what happened to me in Italy, too—it’s as if the country is so celebratory of drama and passion that it gave me permission to really embrace that side of myself which in the UK I was always battling to hide and keep under control.”

KM: You have always been the writer I have looked to for this. For feeling that it is possible to be a woman from the Middle East and to feel desire and have sexuality and not hide that for a women-only chat in the kitchen. I mean, it’s silly now to think of how much of a taboo it felt to me, as an Iranian woman, born Muslim, and from a family that really didn’t embrace any chat about sex even in private, given that even the Quran says that women are made of nine parts of desire. (Is that right? I am not very good on Islamic texts!) I was very repressed in this regard, despite being in the UK since I was nine. I had a double life to protect my parents from who I really was outside the house—and that was a Western woman. Inside the house I was a “good Iranian girl” which also meant being a virgin until getting married. I think in order to integrate my two “sides” and to feel comfortable in my own skin, I had to come to my own reasoning and understanding of sexuality.

In my writing, I really don’t know why I always write about myself—I wish I was clever enough to write a novel and create more distance. But even in my journalism, I have always used myself and my own life as a springboard into something I want to talk about. I discovered that there is even a name for the journalism I have always done—it’s called narrative journalism and has always been my most comfortable style. I never wanted to write memoirs or considered myself interesting enough, but I think the case of both my books, what I wanted to say was more easily said through my own story. Thank goodness my editors do cut out most of my sex scenes! I love writing them, Hanan—I don’t know why, it’s not in my hands, it just happens! I had a stint as a writer of erotic stories in my twenties, maybe I should start that again. . .?

HAS: I have always thought that sexual interactions should come at the right moment, if you squeeze them in to shock and to dare, trust me, they’ll disintegrate on the page. My two protagonists had issues regarding sexuality in their childhoods. Huda was caught playing doctors and her mother rubbed her bottom with red chillies, while Yvonne’s mother was so proud about her boy’s genitals, she could not stop praising them. To go back to your question about women’s nine desires, I have to confess I had never heard that phrase before Geraldine Brooks’ book, Nine Parts of Desire. It is from the Hadith, the traditions of the Prophet Muhammed, “God created sexual desires in ten parts, he decided to give nine to women and one to men.” No wonder why all these restrictions, such as female genital mutilation, were put on women! Kamin, I think that you that you should write what inspires you, maybe writing about sexuality make you feel a certain closeness to love and intimacy. I remember writing on demand a few erotic stories many years ago, I must go back and read them out of curiosity.

KM: But tell me Hanan, what made you break these taboos? To be so bold?

HAS: My colorful childhood! Not traumatic, sad and abnormal as one might think because my mother left home to marry her lover when I was around six years old, and my absent father, whom we saw only at night, married a cruel village woman. I looked after myself, talked to pigeons as they flew and landed, roamed alone in our neighborhood and beyond, walked a long way to my father’s stall in the downtown souk—bazaar—in order to deliver his food. Being totally alone in the meat, vegetable, and fish markets sharpened my senses, my thinking, and made me feel that I have no obligations or allegiances to anyone, except to myself. I took my life in my hands and started to write at the age of 14 about my freedom, about not wanting anyone to stand in my way, and publishing my articles in the students page in one of leading newspapers about how I was defying the rules my father and one of my brothers wanted me to follow. I remember very well how my published articles made me win over the patriarchy. The entire neighborhood was ecstatic that my name appeared in the newspaper and this made my brother and father extremely proud.

“Being totally alone in the meat, vegetable, and fish markets sharpened my senses, my thinking, and made me feel that I have no obligations or allegiances to anyone, except to myself.”

KM: I found it really interesting how present Lebanon was in The Occasional Virgin although of course geographically, they never go there. I feel that Bella Figura too is, in a way, about Iran. I mean, not overtly, but in the gaps in the story, in the lines and spaces. Somehow it is a working out of my own identity and that necessarily contains much about Iran, the past, the revolution and what happened to us. Just as Huda and Yvonne’s past in Lebanon is so alive to them. Do you think, Hanan, that in your work, your country is always a presence? It continues to inform what you write about?

HAS: Places are always characters in my novels; Lebanon is the war in my two novels, The Story of Zahra and Beirut Blues. The desert was a character in Women of Sand and Myrrh, London in Only In London.  I needed to go back to Lebanon in this new novel, The Occasional Virgin, where my two protagonists came from in order for the reader to be able to understand their complexities and their personalities as adults. The mere fact that they met in a visit to Lebanon in one of the conferences from the diaspora and felt cushioned by each other in a country they do not feel at home in but troubled emotionally is important.

KM: I think in my first book The Cypress Tree, Iran was a character too, really not just a place, but a persona with phases and moods and peculiarities and habits. I feel places very deeply.

Don't Take a Free Press for Granted: The Best Journalism in Latin America

Don't Take a Free Press for Granted: The Best Journalism in Latin America

In times when power distorts truth, freedom of speech becomes curtailed, and the lives of journalists are in constant danger,...
© LitHub
Back to top
Loading Comments...