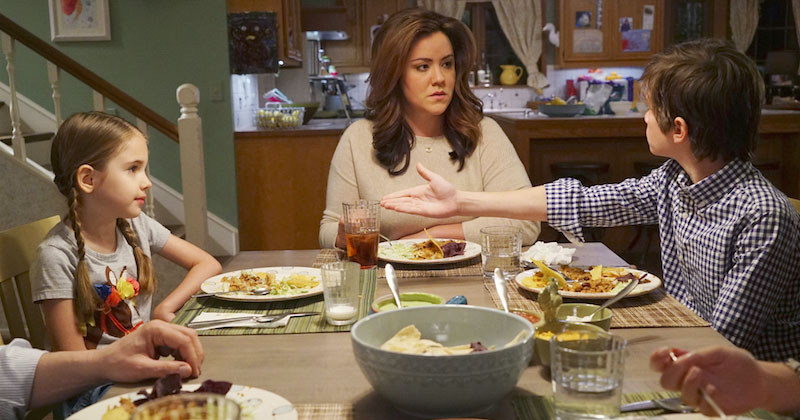 via little, Brown and Company

On irony, gratitude, and mom-guilt

On a recent morning over breakfast in LA—where I’ve been located for the past year, shooting an ABC sitcom I created called American Housewife—a well-meaning friend launched into explaining to me how lucky I was. “You have a TV show, a novel about to come out, and you’re married to a sweet guy and you have two lovely children. Do you realize how many women would kill for your life?”

I was slowly nodding, trying to accept the compliment—if it was in fact a compliment, I’m still not sure—and take in the truth of what she was saying. What she said was true. In the 21st Century, when a woman can navigate an exciting career and raise a family and still have time to binge-watch Netflix, surely that’s a big step for all women, and I should be awash in gratitude. Instead all I could think about was I hadn’t showered in several days, I’d lost my phone (yet again), I hadn’t cooked a meal for myself, or anyone, in several months, and the next day my 6-year-old daughter would be in her school’s winter concert 2,500 miles away in upstate New York. My husband would dutifully record the concert on his iPhone, my friends would tell me how sweet my daughter was, and another mother-daughter moment would slip away, out of reach.

It’s a strange thing to write a television show about a stay-at-home mom, a show whose central character is based on you, while your kids are being looked after by your husband and babysitter. At times it has felt surreal. The actress Julia Butters wears the long style of nightgowns loved by my daughter (“sister wife” nightgowns, my husband and I call them). While it’s been fun to incorporate some of my family’s quirks into the show, I’m always running on a kind of time-delay, aware of the unrecoverable moments I’m missing.

My new novel, The Arrangement, and the TV sitcom have their roots in my husband’s and my decision to move out of New York City when we had our second child. We quickly found ourselves among red maples, croaking frogs, terrifying heating oil bills and an engaging community of couples, parents and singles whose observations about the joys and challenges of suburban life inspired me to sit down each morning and write. I worked 100 feet from the house in a barn we’d renovated to create the kind of office I’d been dreaming of since I became a writer in my 20s. Sun-drenched windows, wide-plank floors, a claw foot tub and a small kitchen where I could make myself lunch.

As I wove the novel from the strands of our new life, the idea of a TV show set in the suburbs started knocking on my door. Two of my friends encouraged me; like many of the women I’d met in our suburban circle, they are whip-smart women who’d taken a step back from successful careers to raise their young kids.

Writing the novel and the TV pilot while being a mom and wife was possible, barely, because my husband was good with the kids and, being a writer himself, understood my daily anxieties and fraught moments of free-fall.

The TV show propelled me to California, and the guilt followed soon after. The guilt of a mom who’s not only working outside the home but outside the state, outside the time zone. Here in LA, when I get home from 12-hour days on set to my messy studio apartment, the gulf of what I’m missing opens up inside me. One night, I was Face Timing with my kids at their bedtime. Their scruffy perfect faces loomed into the screen and then they’d be gone, dashing around the house. I told my husband I felt guilty. “Instead of feeling guilty,” he said, “why don’t you let yourself feel sad?” I burst into tears.

I was sad that I couldn’t do it all, be two places at once, be at the helm of a network show, do last-minute revisions on a novel and be home after school to take my daughter’s artwork out of her backpack and hear my 8-year-old son tell me for the umpteenth time the story of how the Titanic went down.

The irony isn’t lost on me: The dream life I’d created for myself an hour north of New York City inspired a TV show which has taken me thousands of miles away from that life, to Hollywood, the ultimate dream-factory.

I do believe a bicoastal family lifestyle has an emotional shelf life, and I’m frankly thrilled that, very soon, my family will be under one roof again. And while I may be missing precious moments at home, and will never be in contention for a mother of the year award, I can take heart that, if I’m lucky, I have taught my kids to dream.

Sarah Dunn is a novelist and television writer whose credits include Spin City (for which she co-wrote Michael J. Fox's farewell episode) and the critical darling Bunheads, which you would have loved. Her debut novel, The Big Love, is available to read in nineteen languages. Dunn is also the creator and executive producer of the 2016 ABC series, American Housewife. Her novel The Arrangement is out now for Little Brown. She lives outside New York City with her family and their seventeen chickens. 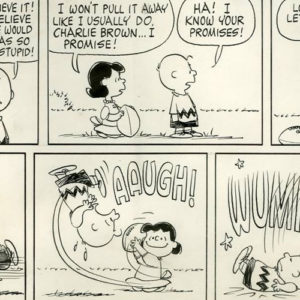 I can’t write objectively about Charlie Brown. It feels like I’m writing about myself. This, I realize, is no accident. I...
© LitHub
Back to top