I Once Wrote—and Spoke, and Thought—in Russian… No More

Translated from the Ukrainian by Kate Tsurkan

In the eastern Ukrainian city of Donetsk, where I was born and raised, most people spoke Russian. It was my native language, too, since my parents spoke it to me. I read my very first books in this language. Various subjects were taught in this language at school, and I studied philology at university, specializing in Russian language and literature. I also wrote poetry and prose in Russian for most of my adult life. It was primarily the Russian literary heritage that shaped me as a poet and writer.

Of course, I read books in Ukrainian. We learned Ukrainian in school, but the teaching of Ukrainian literature was rather subpar. This is because the Soviet education system was keen on reducing the quality of Ukrainian lessons and simplifying the material, making it secondary to the Russian-language curriculum. I am still ashamed whenever I recall it, even though it wasn’t my fault.

I was only a child back then—not a subject, but rather a passive observer of what was happening to me, to us, to everyone. Looking back, I am surprised by the attitudes of our Ukrainian language and literature teachers towards their own field. It remains difficult for me to understand how a person who does not value Ukrainian cultural heritage at the highest level could somehow make it their life’s work.

But the Soviet past is a topic for another time. Sometimes, it seems to me that only now, as the dark and stormy ocean of incomprehensible time stretches between me, my childhood, and my first naive youth, that I can consider the real plots and true meanings of the past, which were back then almost impossible to grasp with any certain clarity.

Nevertheless, when I was 47-years-old, Russia launched its special military operation on the territory of Ukraine. Back then they were calling it the “Russian spring.” It was the start of the war which reached a violent new crescendo on February 24 of this year. During the “Russian spring,” Ukraine lost Donetsk, Luhansk, and Crimea. Russia was always able to use the specific cultural and historical situation of post-Soviet countries for the successful implementation of its own foreign policy goals. As such, one of the leading slogans intending to legitimize the annexation of Ukrainian territories in the eyes of the Western world was their so-called need to “protect the Russian-speaking population of Ukraine.”

Immediately after Russian military groups entered Donetsk, I realized it was no longer safe to be there. Bandits had taken control of the city.

Throughout its existence Soviet authorities diligently Russified the region. Moreover, after the Second World War, large cities and enterprises in the Donbas region were rebuilt and restored by specialists of various ethnic groups from all over the Soviet Union. Clearly, they used Russian as their common language. Afterward, the difference between the Ukrainian-speaking society of small towns and villages in the region and the society of large cities—which, in turn, were built around large industrial enterprises—would become much more evident. It was this factor that Russia decided to exploit, justifying and disguising the start of its war in Ukraine.

I remember that spring of 2014 and the hot July when Russian military groups entered Donetsk. I remember those slogans and my own feelings of powerlessness and rage. It was evident that the annexation of Ukrainian territories was taking place and that the people involved in this aggressive policy didn’t care about the interests of the local population, even if it were three times more Russian-speaking.

Imagine a person like me, who had lived in Donetsk for nearly half a century—who spoke, studied, and wrote exclusively in Russian and had no problems doing so, suddenly being told that I needed to be protected from my own country. That is, the main factor and cause of the war, which began, of course, not now, in 2022, but then, in 2014, was declared to be me, a Russian-speaking citizen of Ukraine.

Immediately after Russian military groups entered Donetsk, I realized it was no longer safe to be there. Bandits had taken control of the city. They were armed, determined, and devoid of any sentiments about any culture. They were mercenaries there to do their job alongside military professionals and members of the Russian special services.

It took me a week and a half to settle some matters and leave for Kyiv, where I didn’t have a single friend at that time.

I boarded the “Donetsk-Kyiv” train and thought about my life, which had been interrupted by this undisguised occupation, taken away from me by the so-called protectors of the Russian speakers of Ukraine. I understood that nothing would ever be the same again. And, of course, I thought about how now one of the main goals in my life should be learning Ukrainian sufficiently enough to write books in the language.

I wonder why the defenders of the Russian language did not find any letters in the Russian alphabet to symbolize the genocide they’re now committing in Ukraine.

The Volodymyr Rafeenko of 2014 was sure that his linguistic efforts would demonstrate to everyone who could see beyond the Kremlin’s propaganda narratives and understand that even for a Russian-speaking Ukrainian, the Ukrainian language cannot be a problem. Because language cannot be a problem at all. Language is a joy: it is happiness, an opportunity for a completely new ontological experience of being in an as of yet undiscovered verbal dimension.

It took me a while to master the Ukrainian language at a level sufficient for writing. But I remained stubborn throughout my study period, understanding that this was the only path forward, given my life circumstances. In 2019, my perseverance paid off: the Ukrainian publishing house Meridian Czernowitz published Mondegreen: Songs about Death and Love, my first Ukrainian-language novel. At the beginning of this year, not too long before the start of Russia’s full-scale invasion, the Ukrainian Research Institute at Harvard University published Mark Andryczyk’s English translation of the novel.

It hurts me to even imagine that someone might now mistake me for a Russian writer based on my command of the Russian language.

From the moment I began writing my first Ukrainian novel, I decided that I was going to write in two languages: one novel in Ukrainian, the other in my native Russian. I really didn’t want to abandon the language of my parents. Although, in the end, I remembered the peculiarities of our familial language collisions. Russia was my parent’s native language, as it was mine. Because that’s how they’d been taught: Russian was the language of higher education, the language of the metropolis, the language that provided opportunities for professional career growth.

However, Ukrainian was the native language of both of my grandmothers. My maternal grandmother learned Russian and went on to communicate almost exclusively in it, but my paternal grandmother continued to speak Surzhyk, an eastern Ukrainian dialect, for her whole life. Although, I should repeat that I had a passion for Russian and a desire to continue writing in the language until the end. I’d believed that I would be able to keep these two languages as a part of me, to write and think in both, becoming fully bilingual.

But everything turned out differently. On February 24 of this year Russia brought their culture on tanks all the way to Kyiv. At that time, my wife and I were staying in a friend’s country house between Bucha and Borodyanka, in the woods on the shore of the large and beautiful Hloriya Lake.

From the early morning of the 24th battles were fought in between our area and Kyiv. There was no way for us to leave. We quickly found ourselves surrounded by a ring of Russian troops and soon began an incredibly challenging and frightening period for us. I will not describe what we had to live through or how volunteers saved us, taking us out of the occupied territories at great risk to their own lives. I will only say that after February 24, I decided that never again in my life would I write or publish any of my work in Russian. I no longer want anything to do with a culture of murderers and rapists.

It hurts me to even imagine that someone might now mistake me for a Russian writer based on my command of the Russian language. I’m done having anything to do with the discourse of Russian-language literature in the world. Enough of all that, effective from February of 2022 until the end of my days…

A few years before the war, in my novel Descartes’ Demon, I wrote about the city of Z, describing my hometown of Donetsk. After it was occupied by Russians in 2014 the city became a place in which it was impossible to live. But now the letter Z has become an infamous symbol of Russia’s full-scale invasion. I wonder why the defenders of the Russian language did not find any letters in the Russian alphabet to symbolize the genocide they’re now committing in Ukraine.

At this moment, language has ceased to be perceived by me as something secondary to the main topic of life. Language has become a powerful identifier of who one truly is. And that is why, in my opinion, Ukrainians should use the Ukrainian language exclusively, at least in the public sphere, regarding socially significant actions.

The language of Z is a forbidden language for anyone who has been even slightly affected by the hell that those Russian scum have inflicted on our land. They are shooting at us “in Russian”: Russian speakers from across the territory of Russia are killing us. For me, the image of a murderer is now first and foremost associated with Russians.

Genocide, the murders of children and adults, rapes, torture, the destruction of churches and museums, kindergartends and schools—beastly, ungodly cruelty—all of this will be closely connected with the Russian language. And nothing can be done about it. The Russian language in its entirety has become obscene, speech outside the bounds of decent human discourse. And these days, if I have to use it in some private communication, I always feel something like disgust mixed with shame, guilt and physical pain.

Volodymyr Rafeenko was born in Donetsk in 1969, and lived there, as a writer and professor of Russian philology, until 2014, when Russia invaded the Donbas. He escaped to a town near Kyiv, and has since written a novel in Russian about the war, The Length of Days (translated by Sibelan Forrester) and a novel in Ukrainian, Mondegreen (translated by Mark Andryczyk) about language, displacement, and being a refugee in one’s own country. 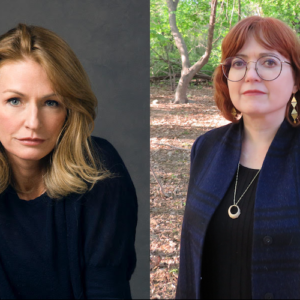 When Maud Newton’s Ancestor Trouble was released, I couldn’t wait to get my hands on it—what a title; I devoured it. It’s...
© LitHub
Back to top