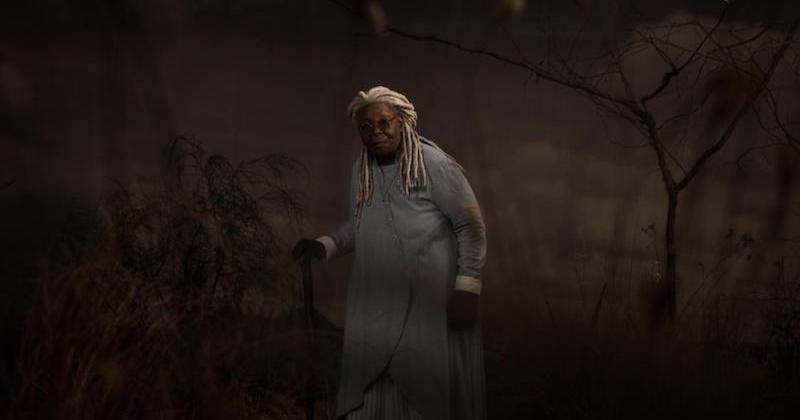 Whoopi communes with a wolf in the first trailer for the new adaptation of The Stand.

The first trailer for the upcoming CBS miniseries The Stand—the latest in a seemingly never-ending stream of big-budget, star-studded adaptation of Stephen King novels—dropped last night during the MTV Video Music Awards (which is apparently still a thing) and fans are pumped (I’m guessing. I haven’t checked.)

Now, despite hearing many good things, and despite my love of all thing post-apocalyptica, I haven’t actually read King’s 1978 dark fantasy opus, largely because it clocks in at a carpel tunnel-inducing 1,152 pages (that’s fourteen pages longer than It, for those of you keeping track). Still, I’d be lying if I said this premise didn’t intrigue me:

King’s apocalyptic vision of a world decimated by plague and embroiled in an elemental struggle between good and evil. The fate of mankind rests on the frail shoulders of the 108-year-old Mother Abagail and a handful of survivors. Their worst nightmares are embodied by a man with a lethal smile and unspeakable powers: Randall Flagg, the nefarious ‘Dark Man.’

It’s hard to tell what exactly is going on in the 30-second teaser, but over a plaintive cover of The Fugees’ “Ready or Not” (excellent choice), we see a young girl wandering though a corn field before being issued a cryptic directive by Whoopi Goldberg, various attractive survivors looking startled in suburbia/Times Square/a hospital room, Greg Kinnear blowing some very impressive smoke rings, handsome-but-sinister Alexander Skarsgård being both handsome and sinister, James Marsden looking startled within another corn field; and Whoopi communing with a wolf.

Like It before it, The Stand was made into a successful miniseries back in the 90s. Considered perhaps the most faithful of the approximately 1,152 Stephen King adaptations (unsurprisingly, perhaps, since all four episodes were scripted by King himself), The Stand (1994) cost a small fortune, was billed as the television event of the season, and was met with pretty decent reviews upon its release.

This latest iteration won’t air till December 17, but while you wait, why not compare and contrast the casts of the 1994 and 2020 versions: