I Come From Generations of People Who Worry

The One Time Donal Ryan Stopped Worrying, He Got Worried

My father’s father was many things: a mechanic, a taxi driver, a postman, a caretaker farmer. He was also a worrier. He died when I was nine and he’d had advanced Parkinson’s disease for most of my childhood so I never really knew him. But I know things about him; like the fact that several men from the townlands around his home would walk across the fields in the evenings sometimes to talk to him. They’d arrive at the half-door of the cottage and ask my grandmother if Martin was around, and he’d invariably be in one of the outhouses or his workshop, and they’d talk to him while he worked. These were men whose “nerves would be at them” in the wink and elbow language of that time and place, and they came to my grandfather for solace. He calmed them, somehow. By listening, I suppose, and by letting them know he understood. He was a quiet man, by every account I’ve heard, composed and kind, and truly empathetic. And he worried, about his family and his neighbors and the land and livestock in his charge; about the nerve-ragged men who came to talk to him in the evenings; about the light in the fridge in my parents’ house and whether it went off when the door closed; about things great and small, abstract and real.

I got it from him. I worry. From the moment I wake to the moment I sleep there’s a whispering in my mind, that rises intermittently to a soft, insistent buzz, and occasionally becomes a palpitatory, arrhythmic pounding sound. The cosmic background radiation of my universe is worry; barely detectable most of the time, but very real and pervasive and all-encompassing once I fix my focus on it, which is often. I worry about my children and my wife and my parents and siblings and their children and whether everyone is okay and happy and healthy and I worry about nuclear proliferation and melting ice and dilution of the gulf stream and fundamentalism and human trafficking and mutating viruses and economic attrition and the timing chain in my car and the weird way the heels of my shoes wear down and whether the conspiracy theorists might be right about everything and the rising cost of health insurance and whether the swallows will make it back to South Africa okay and the decline of the honeybee and the rise of the grey squirrel and the disappearance of the corncrake and the barn owl. And on and on the worries come, in sequent toil, each changing place with that which goes before. Now I’m worried about the fact that I’m only two paragraphs into this essay and I’ve already stolen from William Shakespeare and Patrick Kavanagh.

So I’m blaming my lovely old grandad for his genetic bequest. But he shares the blame. The Cold War had a hand in this, too. I spent a lot of time in the early 1980s reading and re-reading a civil defence handbook outlining the correct actions to be taken in the event of the outbreak of nuclear war. We were to block all vents and gaps and other points of ingress with wet towels and spread sheets and blankets over tables and secure the ends to the floor and take cover in these makeshift bunkers until the all-clear was sounded. We weren’t told who would sound the all-clear or what form this sounding would take but the handbook and the freely distributed iodine pills and the half-hearted efforts my parents made to have a practice drill for the approaching apocalypse and their very transparent efforts to play down the seriousness of the situation to us kids inculcated my six-year-old self with an abject, total, monstrous conviction that life was composed almost solely of worry.

My son is a worrier, too, and so is my daughter, even though I’ve been scrupulously disciplined about never displaying or articulating worry around them, and about making their lives worry-free. So it must be mostly genetic, I guess: grandad to dad to me to them. It probably stretches back along our bloodline to ancient times. My son has existential angst and my daughter worries constantly about other people. They’re still very happy kids, though. They write their worries down and scrunch them up and they feed them to their worry monsters—the greatest invention in all of Toydom, and available cheaply in a variety of shapes, sizes and fur-colors from all good toy stores—and their faithful worry monsters digest their worries overnight and when the morning comes they’re gone. Thomas worried at the start about where the worries could be gone and if they could somehow come back. I told him they were turned to farts, silent, stink-less worry monster farts, and he laughed so hard he cried.

Around a year ago I found that my time spent worrying was increasing and my time spent writing was decreasing in inverse proportion. My worries were too many; they swarmed and swamped and dragged me down and down. Few of them were rooted in reality but worry knows no sense. I needed a worry monster of my own, a way to compress my fears, scrunch them, make them disappear. I knew that I didn’t worry when I was writing fiction and it was going well. I’d leave this world for the imaginary one I was creating and I’d forget I existed and my worries would be sucked towards the singularity at the centre of this alternate universe and atomized. Then I’d stop writing and they’d be spat from the black hole’s far side, back into this dimension, miraculously re-assembled and pristine, their edges even sharper than before. Something about this thought of singularities and black holes evoked my children’s worry monsters and their generous, zipped mouths, where the scrunched notes would be placed to be swallowed and destroyed.

A brilliant idea occurred to me, a way of allowing me to worry in an infinitely efficient manner. Instead of worrying in a haphazard and time-eating way about whatever happened to present itself to my consciousness at any given moment, and unless I had a specific and urgent worry to contend with, I’d restrict myself to worrying about gluons, the tiniest of the known particles of matter. These handy little fellas bind the quarks that protons and neutrons are made of and they govern subatomic spin. Gluons may eventually run out of energy. If that happens the nuclei of all atoms will be destabilized and all visible matter will be destroyed. This probably won’t happen for trillions of years but it could happen at lunchtime today or some day next week or the day I sign a seven-figure movie deal, so worry about gluons is by direct and effortless extension worry about all things, from the tiniest particle to the most massive objects in the heavens, all that is, seen and unseen, known and unknown, and all that might ever be, and all things in between: war, famine, terrorism, aging parents, sick cats, looming deadlines, blocked sinuses, invasive species, invading space aliens, gamma ray bursts, the alt-right, the hard left, the stressed middle, the ozone layer, the blue whale. Oh, the relief of it. If only I’d known years ago that the quanta of existence might someday be sundered by that monster, time. I’d have had no worries.

This new system served me quite well for a while. By worrying about everything possible I worried about nothing at all. Until the day last month when the captain of the plane I was traveling on from New York aborted his landing at Shannon because there was “a problem” with the landing gear. He was going to “call the guys at Boeing to see if they can give us an in-air fix.” We circled the Shannon estuary for a while and when the captain came back on he announced that he hadn’t been able to resolve the issue: his instruments were still telling him that the landing gear would not descend properly and the crew would now take us through the procedure for an emergency landing. My mother’s voice was suddenly in my head: “In the event of an emergency, put your head between your legs and kiss your arse goodbye.” And I laughed inwardly at my mother’s joke, and I wondered why I wasn’t terrified, and I realized suddenly that for the first time that I could remember I was experiencing a complete and total absence of worry: there was absolutely nothing I could do to change the fact that there was a problem with the plane; what was going to happen was going to happen, nothing I said or did or thought could change anything about this situation. And as the crew shouted BRACE, BRACE, BRACE, and the Shannon tarmac rose to meet our plane’s sick underbelly, and the fire tenders raced to meet us, I felt a strange and beautiful calmness, was bathed in it, suffused by it. And as the plane landed perfectly—because, as it turned out, the problem was with a sensor and not with the landing gear—and people cheered and hugged each other, I realized I wasn’t a worrier at all. The absence of worry I had just experienced was actually an absence of any possibility of control, a surrender to fate, a perfect sublimation of fear. So I’m a control freak.

And now I’m terribly worried about that.

Donal Ryan’s All We Shall Know is available now from Penguin Books.

Donal Ryan is the author of The Spinning Heart, The Thing About December, and A Slanting of the Sun, which have all been published to major acclaim. The Spinning Heart won the Guardian First Book Award, the EU Prize for Literature (Ireland), and Book of the Year at the Irish Book Awards, and was longlisted for the Man Booker Prize and the Desmond Elliott Prize. He lives with his wife Anne Marie and their two children just outside of Limerick. 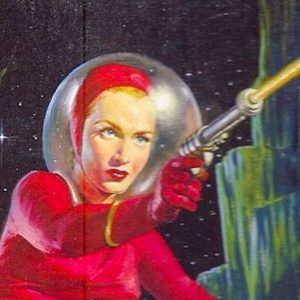 If an author ever tells you that they’re their own worst critic, don’t believe them. It’s not that they’re lying...
© LitHub
Back to top