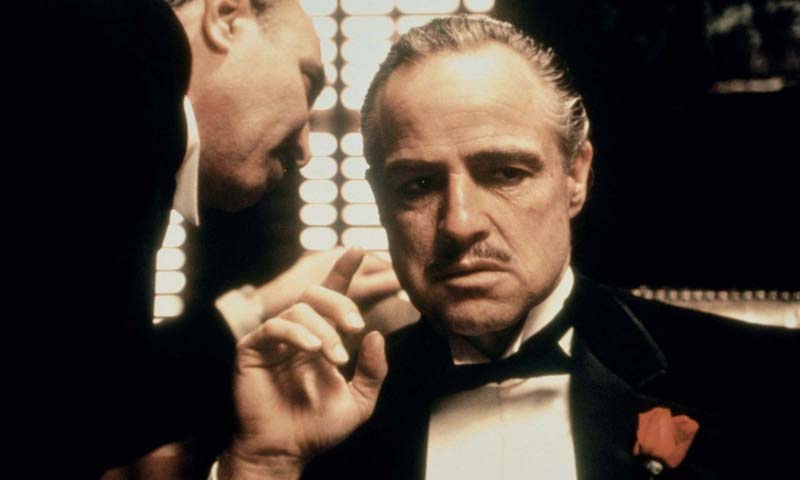 I can’t stop thinking about this bizarre forgotten chapter from The Godfather.

If you’re a lover of great sentences (and if you’re on Lit Hub, you probably are), I can’t in good conscience recommend that you read Mario Puzo’s The Godfather. With all due respect to the late Puzo, whose most famous novel turns 52 today, I don’t think he would have recommended it on those grounds either. In a 1996 appearance on Charlie Rose, the author spoke with refreshing candor about his thwarted efforts to make it as a literary star, and how he wrote his third novel with an eye toward capturing the largest audience possible. Even that ambition was just a means to an end: before publishing The Godfather, he was regarded by his own family as a “chooch,” derived from the Italian ciuccio, which translates roughly to donkey, dummy, idiot, moron. Writing fiction just wasn’t considered a viable career back then. Imagine that.

We all know the broad strokes of what happened next: the book was a mega hit, the movies even bigger hits, and Puzo won two Oscars for his screenplay adaptations. Legacy secured. Omitted from those adaptations, however, is one of the oddest and most oddly written love stories in the history of storytelling, and I just need other people to know that it’s real.

The entire arc occurs in Chapter 22 of the novel. It concerns Lucy Mancini, a close associate of the Corleone family. She was Connie Corleone’s maid of honor at the wedding which kicks off the whole book, but more importantly, she was Sonny Corleone’s secret (maybe not so secret?) lover. She is described earlier in the novel as being “too big down there,” with Sonny’s “pole” being the only thing that has ever satisfied her sexually. Which, um, okay. At this point in the novel (SPOILER), Sonny has been killed, and Lucy has relocated to Las Vegas, where pursuant to Sonny’s wishes she’s been set up with a job at one of the family’s casinos and a percentage of its profits. She’s happy enough, but she can’t stop thinking about Sonny:

Sonny had visited her once a week, sometimes more, never less. The days before she saw him again her body was in torment. Their passion for each other was of the most elementary kind, undiluted by poetry or any form of intellectualism. It was love of the coarsest nature, a fleshly love, a love of tissue for opposing tissue.

Okay—kind of a rocky road there, but how many authors have actually written well about sex? (Mary Gaitskill, Raven Leilani and Garth Greenwell are the only names that come immediately to mind.) Anyway, Lucy develops a lump on her arm, and this is how we meet the casino’s in-house physician, Dr. Jules Segal:

When she asked him what the lump was he patiently explained that it was a quite common fibrous growth that could in no way be malignant or a cause for serious concern. He picked up a heavy medical book and said, “Hold out your arm.”

This goes exactly where you think it’s going. He smashes the growth flat, and with that midcentury quackery done, asks her out for dinner. They begin dating, but due to her insecurity about the size of her vagina it is months before they have sex. After they do for the first time, Lucy is upset and ashamed. Dr. Segal seeks to put her mind at ease:

“Now listen to me,” he said. “Stop thinking in your head that you have a big box no man can love because it won’t give his penis the necessary friction.”

I want to jump in here and mention that I read this book in the middle of New York’s complete 2020 lockdown. I was furloughed from work and had been at home pretty much nonstop for weeks, so when I got to this line I turned the book over and checked the cover, then I checked the title and copyright pages, then I walked a lap or two around the living room. Once in college I wound up with a faulty copy of the Selected Writings of Thomas Aquinas that, midway through the text, just started over from the beginning again, and I kind of thought some similar Calvino-esque printing mishap had occurred. It’s such an out-of-nowhere direction for Puzo to go in, and it has absolutely no bearing on the rest of the plot (which is probably why it was dropped from any and all adaptations).

“Baby, I’m going to build you a whole new thing down there, and then I’ll try it out personally. It will be a medical first, I’ll be able to write a paper on it for the official journals.”

RE the abortions he performs: “I curette ‘em like you scrape a frying pan.”

Moments before Lucy’s surgery: “I told him you were my special girl so he’s going to put in some real tight walls.”

The “him” in that last passage is Dr. Kellner, the surgeon who actually performs the procedure, who is apparently capable of “building a new snatch as easily as a carpenter nails together two-by-four studs.”

Segal is described as being slender and blond, so given the scale of Francis Ford Coppola’s production and who was big at the time, I figure that had this part been cast it would have gone to Robert Redford. Just imagine Robert Redford curing lumps with heavy books and delivering these crazy, crazy lines. (And God, if that hunch is correct, and those screen tests exist somewhere, please do your thing, internet.)

I guess in a book full of blood and revenge, this chapter is what passes for a glimmer of happiness: at the end of Lucy’s reconstructive journey she and Segal make love multiple times, but not before Segal proposes marriage. “That shows you how much confidence I have in my work,” he tells her. “Now let’s see you earn it.” As my wife would say, woof.