Luis Jaramillo Finds Something Strange on His Windowsill

Ever since I started writing about witches last year, ladybugs keep showing up in my apartment. We live on the 19th floor on a busy corner of Manhattan, overlooking the entrance to the Lincoln Tunnel. There are very few trees on the street, but our apartment is at the same height as the roof deck of the building across from us, where there are trellised vines in planters. Two flights down in our building, there’s a terrace with trees in pots, and our building’s roof deck a couple of flights above us is fully planted. I suppose there must be enough aphids on the trees and vines across and below and above to sustain a population of ladybugs. Despite the logic of this, I still find it odd, and exciting, that every day one or two ladybugs find their way to the window next to the couch where I write.

When I told my friend Laura, a poet, that I was going to write about witches, she said, “Be careful. If you call on the occult it’ll come.”

The novel I’m writing is set on the border of Mexico and the US, in El Paso and Juarez, in three time periods, the present day, in 1942, and in 1821, where the witches are called las hijas de la montaña, or the daughters of the mountain, a phrase I made up, and the working title for the book. I cringe to admit this, but there are not only witches in the novel, there’s also time travel.

We have sides we share in public, and sides we keep private. This is one side of me I’ve tried not to let out of the bag, the side that believes in things that can’t be seen.

Doing research for my novel I found what appears to be a self-published memoir entitled The Known, bearing the subtitle “A Canadian Woman’s Experience with Witchcraft in Mexico.” [The book was a winner in the memoirs (Overcoming Adversity/Tragedy/Challenges) category of the 2014 Next Generation Indie Book Awards.] The writer tells the story of moving to San Miguel de Allende to manage a horse farm. She meets and marries a Mexican man, and after a brief period of happiness together, they are cursed, literally cursed. The writer finds “talcum-like dirt,” on her skin and all over her house. She hears strange noises, like stones falling on the roof. In the house is an overpowering smell of cheap cologne. In the morning she finds things pulled out of cupboards and placed around the kitchen, even though she has been at home, and the doors are locked. Reading the memoir I believed that the writer believed this had happened to her, but I was skeptical too. Mental illness seems the more plausible explanation for what she describes. Talking about magic doesn’t just seem silly and superstitious, it seems sick.

A few months ago, while texting a friend, I tried to type the word “book,” and autocorrect changed it to “hija,” H-I-J-A., daughter, and it felt like the witches were making their presence known.

The ladybugs aren’t as spooky, but after a couple weeks of seeing them, I googled “ladybug meaning,” which lead me to new agey website with this sentence: “Ladybug’s medicine includes the golden strand that leads to the center of the universe, past lives, spiritual enlightenment, death and rebirth, renewal, regeneration, fearlessness, protection, good luck, wishes being fulfilled, protection.”

I’ve always loved ladybugs, especially the red ones. I love how compact they are, how their translucent wings fold down over their bodies, invisible unless in use.

In Spanish ladybugs are called mariquitas. Mariquita is a diminutive of marica, which is a diminutive of Maria, or the Virgin Mary. This is the same as in English, really. The “lady” in “ladybug” is synonymous with Mary. Think about the churches called our lady of perpetual help, our lady of victory. Another derivation of mariquita or maria is maricon, faggot. The word—and this makes sense—means effeminate, ladylike, implying rather than naming homosexuality.

Matthew, my husband, says that everyone should come out, even if you’re not gay. Everyone has something to own up to. I came out as gay a long time ago, but that’s not all I am, nor all I’m sometimes ashamed of. It’s not smart or cool to write fantasy, and I am afraid of looking cheesy, dorky, silly. But as I’ve been writing this book, I’ve felt like I’ve touched the live wire of story in a way I never have before. Maybe this is the golden thread.

The other morning when I was writing, I took a sip of my coffee and felt something in my mouth. A drowned fly, I thought. I fished it out. A ladybug. I held it on its back on the end of my finger, hoping it would revive itself and fly away. But no, its legs stayed curled in, all except for one jutting out like a kickstand. I put it on my little altar, to keep company with two other dead ladybugs I’ve found.

Luis Jaramillo is the author of The Doctor’s Wife, winner of the Dzanc Books Short Story Collection Contest, an Oprah Book of the Week, and one of NPR’s Best Books of 2012. Luis’s work has also appeared in Open City, Gamers, Tin House Magazine, H.O.W. Journal, and Red Line Blues. He is the Director of the Writing Program at the New School, where he is also co-editor of the journal The Inquisitive Eater: New School Food. 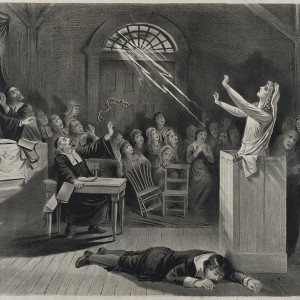 As far as popular fascinations go, few have endured for as long, or created as robust a bibliography, as witches. While the word...
© LitHub
Back to top