Is a Published Memoir the Last Word?

By Molly Caro May

I wrote a book about rage, my rage.

The basic narrative follows my postpartum experience and the related health issues: pelvic floor dysfunction, incontinence, hormonal imbalance, and hypothyroidism. I spent two years trying to sort out the source of my anger: situational, hormonal, ancestral or mental? I threw rocks at trees. I hurled laundry at my husband and it landed in a very unsatisfactory poof. I slammed on the brakes of our car in the middle of a road. I stomped out of our house and fled to the mountains. I became an expert at the verbal takedown of my loved ones. By some grace, though, I never wanted to hurt my baby daughter. I knew I wasn’t the only new mother to feel such intensity. And there began the writing. If I could put my story on paper, then maybe postpartum anger would be normalized and the world would be better able to support all women.

I was also counting on the writing to do its most noble job.

Release me from my own story.

I did not want to be known as the rage woman.

Our job as memoirists is to invite a reader into our world and make it feel present tense and real. We tell the truest truth about a moment in time from our perspective. We sit in our chairs and try to imagine the film of our life: what did it smell, sound, taste, look like? Bring in the sensory details. Bring in the scenes. Write it down. What’s at stake for the protagonist, i.e. me? How does she get from A to Z? We make choices. We can’t include the whole story, so we take our chisel and remove some parts and bring into relief those that matter most to us. If we’ve done well, we’ve exposed the light and shadow of all characters; in essence, we’ve humanized.

Once I wrote a first draft of my story of rage, though, I had already begun to evolve away from the story. Seeing my manuscript on the kitchen counter next to a handful of cilantro in a mason jar, separate from my body, I realized it was a story about a woman who was no longer me. I had a new empty space within me. There, we say, is the healing power of the written word.

The Molly in the book now feels like a younger sister. I want to pull her into my arms—sometimes I want to scold her. Mostly, I am kind. The book will stack itself in bookstores and start to talk to people. It will touch the people who need to be touched by it. I do believe that. Books are like people. We have chemical reaction to them.

This is where the readers come in. By the time someone reads your memoir, two to three years after the writing of it, you are already well into the next phase of life. But while the author has moved beyond, the readers are there still: 100, or 1,000, or 10,000 eyes on a story, making it hum louder and stay alive, preserving that particular energetic signature. Readers identify the writer as the person living in that moment in time. This creates a complication. What does that do to the author’s ability to grow away, again, from her story? Maybe nothing. Maybe everything. No one reader alone can hold an author hostage to her own story. But the collective readership and witness has always been skilled at creating the meme—whether it means to or not. My first book was about building a yurt and my editor used to joke that we would make action figures of “yurt woman.” No one ever called me yurt woman to my face but it stood as a possibility. Most likely, someone somewhere must have said, “Have you read that book about the woman and her yurt?”

I never wanted to be yurt woman for the rest of my life.

I never wanted to be rage woman for the rest of my life.

I’m not static but my words on a page are.

They may take on new meanings for new readers but, in the end, the sentences don’t change. After all, they live in the Library of Congress. In a way, then, the published memoir is the last word, the last word at least in that physical incarnation of a book made of 260 pages. But the beauty of authorship is that, in our modern times, the conversation doesn’t end with the book. We have readings and social media and interviews and opportunities to discuss beyond the book.

As I show up to read at bookstores this winter, I will be able to discuss this exact conundrum: how do we document a moment in time and acknowledge that time moves and people change and change again? It’s a diamond of a question. Most of us are writing a story in order to move ourselves past it. We don’t want to end up imprisoned there. We want to imagine ourselves into a new story. It’s our human condition. Ideally, in any good writing, a character undergoes a change. Without the arc, readers have little reason to flip the page. Readers, in the end, are reading for that change. They want the reassurance that they too can change.

We are working with rocket fuel here.

Story is the most powerful tool at our fingertips.

At some point, my mother corrected my fear about being “rage woman.” We sat on the porch outside her cabin one late July evening. Grasshoppers leapt in the tall grass as thunderheads rolled toward us.

“I’m just worried that I’ll never dig out of rage because I’ve made a thing of it by writing a book,” I told her.

“But you weren’t always a big ball of rage, Molly,” she said, “You are so many other dimensions.” Then she reminded me that I wrote the book that way too. I showed my dimensions.

And that’s what we want—as humans and memoirists.

We want to preserve our dimensions.

We want to be seen for our dimensions.

We don’t want there to be any last words on anything.

Molly Caro May's memoir BODY FULL OF STARS: FEMALE RAGE AND MY PASSAGE INTO MOTHERHOOD is now on sale, from Counterpoint Press. She is a graduate of Middlebury College, and has worked as a teacher, artist’s model, apple and cherry picker, lab assistant to a clinical herbalist, barista in a seaside town, opera caterer, field assistant to a frog biologist, conservation program developer, mentor to at-risk teenagers, vegetable farmer, and in the editorial department of a New York-based publisher. She lives with her husband, daughters, and hound in the Gallatin Valley of Montana. 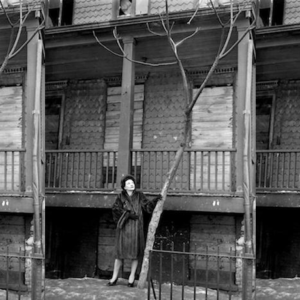 The conversation I’ve been dreading: Ijeoma Oluo talks with her mom about race. | Literary Hub 10 iconic Brooklyn...
© LitHub
Back to top