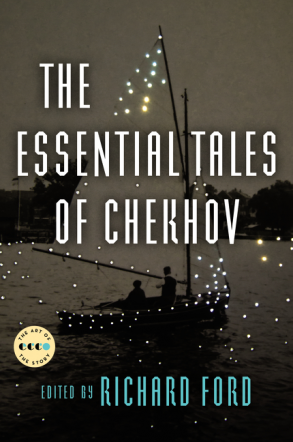 The following is a story by Anton Chekhov, collected in The Essential Tales Of Chekhov compiled by Richard Ford. Chekhov, who died today in 1904, is recognized as a master of the modern short story.

Ivan Yegoritch Krasnyhin, a fourth‐rate journalist, returns home late at night, grave and careworn, with a peculiar air of concentration. He looks like a man expecting a police‐raid or contemplating suicide. Pacing about his rooms he halts abruptly, ruffles up his hair, and says in the tone in which Laertes announces his intention of avenging his sister:

“Shattered, soul‐weary, a sick load of misery on the heart . . . and then to sit down and write. And this is called life! How is it nobody has described the agonizing discord in the soul of a writer who has to amuse the crowd when his heart is heavy or to shed tears at the word of command when his heart is light? I must be playful, coldly unconcerned, witty, but what if I am weighed down with misery, what if I am ill, or my child is dying or my wife in anguish!”

He says this, brandishing his fists and rolling his eyes. . . . Then he goes into the bedroom and wakes his wife.

Returning to his room he takes off his coat, waistcoat, and boots. He does this very slowly; then, assuming an expression of injured innocence, he sits down to his table.

There is nothing casual, nothing ordinary on his writingtable, down to the veriest trifle everything bears the stamp of a stern, deliberately planned programme. Little busts and pho tographs of distinguished writers, heaps of rough manuscripts, a volume of Byelinsky with a page turned down, part of a skull by way of an ash‐tray, a sheet of newspaper folded carelessly, but so that a passage is uppermost, boldly marked in blue pencil with the word “disgraceful.” There are a dozen sharply‐pointed pencils and several penholders fitted with new nibs, put in readiness that no accidental breaking of a pen may for a single second interrupt the flight of his creative fancy.

Ivan Yegoritch throws himself back in his chair, and closing his eyes concentrates himself on his subject. He hears his wife shuffling about in her slippers and splitting shavings to heat the samovar. She is hardly awake, that is apparent from the way the knife and the lid of the samovar keep dropping from her hands. Soon the hissing of the samovar and the spluttering of the frying meat reaches him. His wife is still splitting shavings and rattling with the doors and blowers of the stove.

All at once Ivan Yegoritch starts, opens frightened eyes, and begins to sniff the air.

“Heavens! the stove is smoking!” he groans, grimacing with a face of agony. “Smoking! That insufferable woman makes a point of trying to poison me! How, in God’s Name, am I to write in such surroundings, kindly tell me that?”

He rushes into the kitchen and breaks into a theatrical wail. When a little later, his wife, stepping cautiously on tiptoe, brings him in a glass of tea, he is sitting in an easy chair as before with his eyes closed, absorbed in his article. He does not stir, drums lightly on his forehead with two fingers, and pretends he is not aware of his wife’s presence. . . . His face wears an expression of injured innocence.

Like a girl who has been presented with a costly fan, he spends a long time coquetting, grimacing, and posing to himself before he writes the title. . . . He presses his temples, he wriggles, and draws his legs up under his chair as though he were in pain, or half closes his eyes languidly like a cat on the sofa. At last, not without hesitation, he stretches out his hand towards the inkstand, and with an expression as though he were signing a death‐warrant, writes the title. . . .

“Mammy, give me some water!” he hears his son’s voice. “Hush!” says his mother. “Daddy’s writing! Hush!” Daddy writes very, very quickly, without corrections or pauses,

he has scarcely time to turn over the pages. The busts and portraits of celebrated authors look at his swiftly racing pen and, keeping stock still, seem to be thinking: “Oh my, how you are going it!”

“Sh!” whisper the authors, when his knee jolts the table and they are set trembling.

All at once Krasnyhin draws himself up, lays down his pen and listens. . . . He hears an even monotonous whispering. . . . It is Foma Nikolaevitch, the lodger in the next room, saying his prayers.

“I say!” cries Krasnyhin. “Couldn’t you, please, say your prayers more quietly? You prevent me from writing!”

“Very sorry. . . .” Foma Nikolaevitch answers timidly. “Sh!” After covering five pages, Krasnyhin stretches and looks at his watch. “Goodness, three o’clock already,” he moans. “Other people are asleep while I . . . I alone must work!” Shattered and exhausted he goes, with his head on one side, to the bedroom to wake his wife, and says in a languid voice: “Nadya, get me some more tea! I . . . feel weak.”

He writes till four o’clock and would readily have written till six if his subject had not been exhausted. Coquetting and posing to himself and the inanimate objects about him, far from any indiscreet, critical eye, tyrannizing and domineering over the little anthill that fate has put in his power are the honey and the salt of his existence. And how different is this despot here at home from the humble, meek, dull‐witted little man we are accustomed to see in the editor’s offices!

He sleeps till twelve or one o’clock in the day, sleeps a sound, healthy sleep. . . . Ah! how he would sleep, what dreams he would have, how he would spread himself if he were to become a well-known writer, an editor, or even a sub‐editor!

“He has been writing all night,” whispers his wife with a scared expression on her face. “Sh!”

No one dares to speak or move or make a sound. His sleep is something sacred, and the culprit who offends against it will pay dearly for his fault.

From THE ESSENTIAL TALES OF CHEKHOV. Translated by Constance Garnett. Edited with an Introduction by Richard Ford. Used with permission of Ecco Press, a division of HarperCollins Publishers Inc. Copyright © 1972 by Macmillan Company. 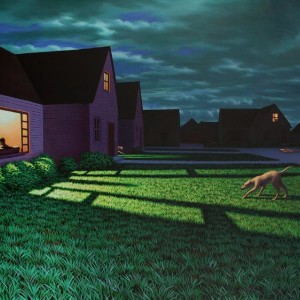 Quick Trip The line break is still poetry’s most ancient, if not also its most radical, technology. It’s what separates the formal...
© LitHub
Back to top