How Writing Fiction Can Expose More of Yourself Than Writing Memoir

Signal Fires is Dani Shapiro’s first novels in fifteen years, and has everything most of us want in fiction: indelible characters, a book we can’t put down, and the ability to provoke how we think about our lives by understanding of their lives. She joins Roxanne Coady for a live conversation held at RJ Julia Booksellers.

Roxanne Coady: Let’s start with this question, because it seems a little oxymoronic, and that is that you’ve said that this book is your most personal book. Which might make sense if you weren’t someone who has written five memoirs. So why do you think of this book as your most personal?

Dani Shapiro: Such a great question. I mean, I started out as a novelist and made this detour into memoir, a detour that turned into a life in memoir for reasons that I really didn’t understand why. And I assumed I would return to fiction at some point. But I think in writing fiction, there is the real possibility of it being such a powerful, almost the subconscious of the writer, the obsessions of the writer, the themes of the writer are all sort of on display in a different way. I think if you read the body of work of a memoirist, you get to know her in a certain way. But if you read the body of work of a fiction writer, I actually think it goes deeper in a way, and not as a form, but deeper into the psyche where we start to see, know what makes somebody tick.

Dani Shapiro: Exactly. When people say to me after my years of public contemplation about things, you know, Oh, you must feel like I know you. I for years always thought, well, I don’t feel that way. Is there something wrong with me? I don’t feel exposed. And I think it’s because writing memoir is a consummate act of controlling the narrative. You’re controlling the story. You’re choosing exactly what belongs. What to leave in, what to leave out. And in good memoir, the writer’s not doing that in a self-protective way. It’s more like fashioning a persona that’s going to allow the story to be told and and received by the reader in the best possible way. Whereas in writing fiction and writing a novel, the writer is often the last to know. You know, themes of mine or obsessions of mine get pointed out to me after the fact. I hadn’t even thought of that or or I’ll be writing a sentence or a scene and I won’t know what the end of it is going to be until they get there. So there’s much more discovery. In memoir, you know what happened, but why or how or what belongs to what. And in fiction, the whole world is up for grabs. And so there’s the choosing of what you know, of what ends up between the pages of of a book. And a novel is just so completely different.

Dani Shapiro is a best-selling novelist and memoirist and host of the podcast Family Secrets (now in its seventh season). Her work has been featured in The New York Times, The New Yorker, Vogue, and Time. She has taught at Columbia and New York University and is the co-founder of the Sirenland Writers Conference. She lives in Litchfield County, Connecticut. 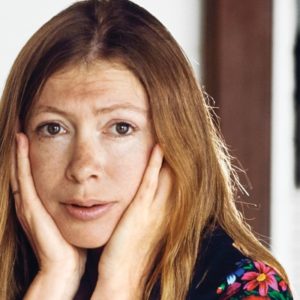 Joan Didion's estate sale, “An American Icon: Property From the Collection of Joan Didion,” hosted by Stair Galleries,...
© LitHub
Back to top