How Women Are Changing the Face of African Publishing

In the mid-20th century, a feverish movement for independence from colonial governments paired with a growing university-educated class, who pushed for education on the continent to be decolonized, created the perfect conditions for the birth of anglophone African publishing. In 1962, the African Writers Series (AWS) was founded by London-based publisher, Heineman, whose editorial manager at the time, Alan Hill, noted that Nigeria was considered “a place where you sold books rather than a source for new writers.” The series publication was poised to bring post-colonial Africa to the world through literature while allowing African writers space to create independently, for themselves and their futures.

AWS would eventually go on to publish works by Africans across the continent within its first two decades, creating a venerable list of classics that molded generations of Africans. Chinua Achebe, a foremost Nigerian writer who served as the series’ founding editorial adviser, declared in his collection of essays Home and Exile that the AWS “was like the umpire’s signal for which African writers had been waiting on the starting line. ” He notes that an extensive body of work emerged from across the continent within a short timeframe, ensuring that “Africa’s future generation of readers and writers” read literature by other Africans—a state of affairs that wasn’t available to him and his generation.

In its first two decades of existence, the AWS published over 200 writers, of which only four were women, starting with Flora Nwapa and, years later, Bessie Head. Other publishers soon filled in the gap, publishing writers like Ama Ata Aidoo, Buchi Emecheta, and Grace Ogot, amongst others. Still, the 1960s through the 1990s constituted a period of creative silence for African women writers and queer Africans, making them a people forced to form identity in solitude and secrecy, without heroes. An exception existed in Flora Nwapa, who set up her own publishing house in the 1970s, thus charting a course into the male-dominated trade publishing industry.

African woman publishers are beating down a path while building a literary establishment that is inclusive and diverse.

Despite the good works they did at the time, the AWS also left an irreparable damage to Africa’s literary canon by not publishing more female and other social minority writers at a critical time when Anglophone literature from Africa was gaining recognition and rapid growth. By publishing less than a handful of women after decades of consistently churning out works by African men, the African Writers Series (AWS) threw away an opportunity to archive and curate more literary evidence from diverse experiences and voices.

As post-independent Africa roiled with coup, political and economic stability, dictatorship and wars, literary publishing took a beating and the imagination suffered. But since the 2000s, a new generation of writers emerged and publishing within the continent began to grow, with women playing major roles in the revival of publishing. Now, women are taking the lead on publishing across the continent by publishing groundbreaking literature, works that challenge existing ideas and bring to life new ways of seeing the past, understanding the present, and imagining the future.

Most African literary publishers are small, independent publishers operating on a skeleton framework with limited budget and energized by passion. The publishing markets are vastly unregulated, lacking infrastructure and well defined networks, and are overrun by book pirates. And unlike the AWS, which was dependent on academic institutions for consumption and profitability, this present era of publishing isn’t; instead, they serve mostly fully-formed consumers with taste and sensibilities that drive production and demand. It is in this territory that African woman publishers are beating down a path while building a literary establishment that is inclusive and diverse. “In Africa, as more and more men see the economic potential of general trade publishing, they’ll move into the space to push women out because they’ll be able to access capital in a way that has been more difficult for women,” Bakare-Yusuf told Publishing Perspectives.

Other women also exemplify this shift in publishing across the continent. Of the five women who have won Brittle Paper’s annual African Literary Person of the Year Award, which shines a light on literary figures “who work behind the scenes to hold up the African literary establishment in the given year,” three are African publishers: Ella Wakatama Affrey, Bibi Bakare-Yusuf, and Lola Shoneyin.

Shoneyin, whose annual Ake Book festival has become the premier book festival on the continent, is also the publisher at Ouida Books, a publishing hub for a generation of emerging African writers. At Farafina Books, Enajite Efemuaye holds sway as the managing editor, whilst Louise Umutoni of Huza Press highlights the multiplicity of experiences in Rwanda. In South Africa, Thabiso Mahlape, founder and publisher at Blackbird Books, has created a platform for black South African writers to tell their stories. And Azafi Omoluabi Ogosi has headed Parresia Books since its inception, shaping the Nigerian publishing house into a force in the industry.

For African literature, the future is hopeful; it remains necessary to subvert and upend tradition while reaching into the margins to find fresh new stories and voices.

Emeka Joseph Nwankwo is a writer and digital media professional from Nigeria. He served as the communications manager (Africa) for Cassava Republic Press and is currently working on his PhD research at Manchester Metropolitan University, U.K. His writing has appeared on platforms like Popula, adda, NPR, The Republic Journal, This is Africa, and The African Report. 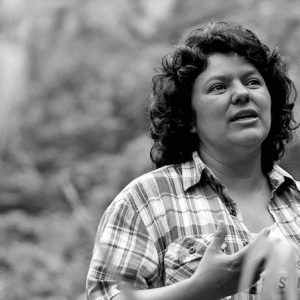 Berta Cáceres is perched on the edge of the sofa, glued to the tiny television. It’s early and her husband Salvador Zúñiga...
© LitHub
Back to top