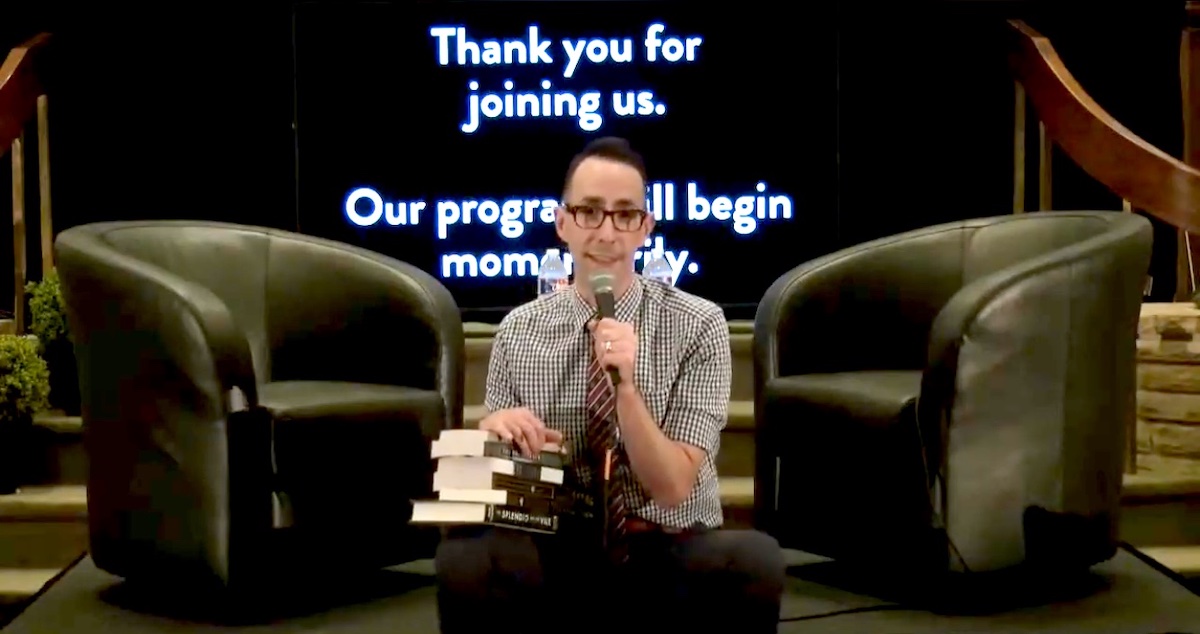 One of the biggest books of this past plague year was Erik Larson’s The Splendid and the Vile. The success of the book is no surprise, Larson’s books are perennial bestsellers and he’s a hell of a storyteller. But the core narrative, the perseverance of the British people in the face of Nazi aggression and the Blitz, seemed perfectly timed to a year when the world faced a new, relentless enemy, COVID-19.

The book dropped in late February 2020. The virus was already becoming a concern, but not enough to stop authors from touring. At Magic City Books in Tulsa, Oklahoma, the nonprofit bookstore I co-founded and opened in 2017, we host well over 100 in-person author events each year. At least we used to. Our visiting author series started in 2009, well before the existence of the bookstore, and we’ve had the great opportunity to host some of the biggest names out there. But we had never had the chance to host Erik Larson.

That changed in late 2019 when I heard from Penny Simon, VP/Executive Publicist for Crown. I’d recently worked with Penny on a hugely successful (and very well attended) event with Rachel Maddow. She knew we could deliver. Plans were made. A date was set. March 12, 2020.

Due to limited space and a desire to get out into the community, a large portion of our events take place off-site and at venues around the city. One of our favorite partner venues is the Congregation B’nai Emunah Synagogue. Over the past decade we’ve hosted some of our most memorable events in their beautiful sanctuary: Yann Martel, Jeffrey Eugenides, Anna Quindlen, Jonathan Lethem, Daye Eggers, former U.N. Ambassador Samantha Power, and countless others. With the ability to accommodate 1,000-plus guests, we knew this would be the perfect setting for Erik Larson. We booked it, put tickets on sale, and had no idea what was coming.

March 11, 2020. Day before the event.
A hundred miles away, in our state capital of Oklahoma City, the NBA season abruptly came to an end when Utah Jazz player Rudy Gobert tested positive for COVID-19 just moments before tipoff against my beloved OKC Thunder. Basketball fan or not, this was startling and got our attention. This was real and becoming more so by the hour, the minute. Oh, and by the way, Tom Hanks tested positive too.

March 12, 2020. Day of event.
Nearly 1,000 tickets sold. Erik Larson on the road. The night before, Larson had been in Kansas for an event and rather than taking a flight with a needless connection and airport hassle, he and his team opted to get a car and make a short drive to Tulsa. Throughout the day I’m in constant contact with my boardmembers, store staff, synagogue leaders, and others, trying to make the right decision. One wrinkle in the plans is our choice of moderator. Tulsa Mayor G.T. Bynum is a voracious reader and has a particular interest in works of history. We invited Mayor Bynum to be in conversation with Mr. Larson and he kindly obliged. But with the city on the precipice of closing down, would he be able to take part? If we had to cancel the event, we’d be refunding thousands of dollars in revenue and disappointing hundreds of loyal fans.

We had never done a virtual event. Never. As I’m writing this, we’ve now done well over 100, but this was the first.

By late afternoon it became apparent that we needed to pivot. In a bit of good luck, we found out that the synagogue had a pre-existing simulcast system in place to share services virtually. We had never done a virtual event. Never. As I’m writing this, we’ve now done well over 100, but this was the first. The basic system was in place, but we didn’t have the right camera for such a thing. Can we get one? Where can we get one? We only have a few hours. Rabbi Marc Boone Fitzerman and Rabbi Dan Kaiman, the dynamic duo I work with often, set to work to make the calls and pull off the needed miracle. The story, which I can only barely remember, involved calling someone at a local casino and borrowing a camera. It worked out. Don’t ask me how.

I hear from the mayor’s office that he will still do the event. Relief washes over me. We need to email every one of the attendees with a note telling them the event will be broadcast via a remote link. Will they get the email in time? And actually read it? We also have nearly 1,000 books to be picked up.

The Author Arrives
Erik Larson arrived a bit early to sign our stock, go over the plan, and meet with Mayor Bynum. Penny Simon from Crown is with him. They both know this is his final event of the tour. The rest are canceled in short order. We weren’t wearing masks yet but I clearly remember him being the first person to offer me an elbow to bump in lieu of a handshake. We’re supposed to go live via simulcast at 7 pm but it’s 6:45 and the camera (that one from some casino) has yet to arrive. It does finally and a few frazzled AV guys work to get it going and try to run a test. Some people are showing up, not aware of the change in plans. We do our best to explain and help them understand why.

7:00 pm
The camera light goes on. I’m sitting on a small stage with all of Erik Larson’s books stacked on my lap. I’m talking directly to the audience at home, thanking them for their flexibility and trying to be positive about the days ahead, not realizing those days would be weeks, months, a year. And there, in a big, empty synagogue in Tulsa, Oklahoma, Erik Larson and Mayor G.T. Bynum had a wonderful conversation about a powerful book. It was our last event with an author in person and our first virtual event. All in one.

At the time of the event, the global reality of this pandemic was becoming more and more obvious here in America. In the coming days we would close the bookstore for an indeterminate period, implement emergency measures to stay in business, and be constantly amazed at the support of our community.
In his first speech as Prime Minister, Winston Churchill said, “We have before us an ordeal of the most grievous kind. We have before us many, many long months of struggle and of suffering.” Sound familiar?

But writers like Erik Larson and books like The Splendid and the Vile remind us that he followed those words with… ”You ask, what is our aim? I can answer in one word: It is victory; victory at all costs; victory in spite of all terror; victory, however long and hard the road may be.”

Jeff Martin is an author, editor, and president/co-founder of the nonprofit Tulsa Literary Coalition and Magic City Books in Tulsa, Oklahoma. magiccitybooks.com 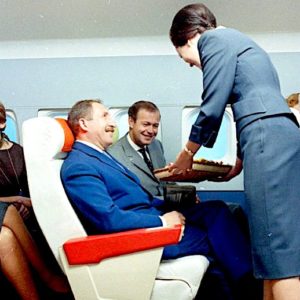 Part nurse, part waitress, part savior, part seductress, the airline stewardess was both a character conjured from male fantasy...
© LitHub
Back to top