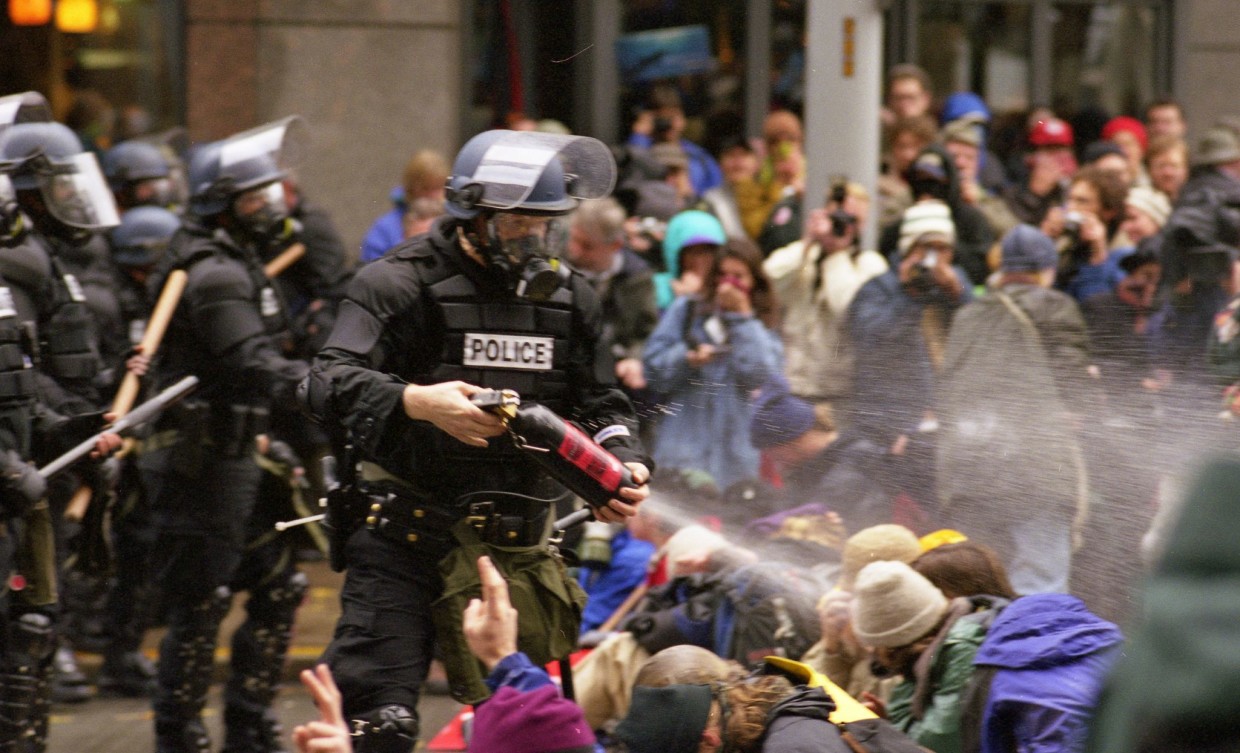 On writing history and ideology into fictional lives

In November of 2000, a little after my 24th birthday, I traveled to the city of Seattle for the first time. While I was there, I found myself not far from Pike Place Market, where I took in a series of protests that coincided with the one-year anniversary of the 1999 WTO protests. I’d love to say in retrospect that I was there out of a serious ideological conviction, but I wasn’t—I was mostly there due to coincidence, and my first impulse wasn’t political, but documentarian. I didn’t join the crowd of protestors, but instead photographed nearly everything I could see. Eventually, I wandered off; by the time I came back and resumed photographing, I noticed that the Seattle Police Department was there in full riot gear, looking ready for a conflict. I also recognized on some level that, despite considering myself mostly an observer, this would likely not matter much to those in uniform.

The WTO protests were already recent history by the time I wandered through the space they had once filled. I was watching one event that was an echo of a previous event and, in its own way, a kind of summoning of the same energies and beliefs that made its predecessor so vital, so charged. Although even at that point, American politics had begun to shift focus—November 2000 was a time in which the country was largely fixated on Florida’s electoral vote, which would ultimately determine the victor of that year’s presidential election. Leap forward another year to November 2001 and the country’s politics were driven by the terrorist attacks two months earlier, and the United States’ entry into war in Afghanistan.

Writing it down makes it look orderly. The process of remembering is different. On one hand, that doesn’t feel like a series of events that took place within the span of 24 months. On the other hand, I know that was the case, as dizzying as it may seem over a decade later. Equally disquieting, in its own way, is delving into history that you remember in fictionalized form. While the history of American politics in the 1990s and early 2000s hasn’t retreated too far into the category of blurred memories, it does still fall into the realm of the historical: something that can be pinned down, something that’s more defined, more clarified, than a novel set in a loose present day or in arbitrary year.

Of course, a lot of this is relative. Sunil Yapa’s Your Heart is a Muscle the Size of a Fist and Thomas Mallon’s Finale are both ambitious novels set against historical backdrops that have taken place during my lifetime. But in the case of Mallon’s book, set mainly in 1986 and focusing on an insider’s perspective of the second term of Ronald Reagan’s presidency, my memories are hazy. I was ten—I didn’t follow politics all that much. Yapa’s novel is set in 1999, and takes the WTO protests as its setting. Here, it was more difficult to separate fiction from memory: Yapa’s characters, protestors and police alike, felt like people I might have gone to school with, talked politics with, gazed warily at across a room.

Your Heart is a Muscle the Size of a Fist is set over a relatively short period of time, although time itself frequently doubles back in on itself in Yapa’s telling. There’s a great deal of symmetry here: the reader is given the viewpoint of an equal number of police and protestors, none of whom are presented as wholly noble or wholly villainous. Even Park, the novel’s most seemingly unsympathetic character, a policeman who seems to embody an authoritarian rush towards violence, is presented with some redeeming traits. Acting as a counterpoint to the narratives of the protests themselves is the account of a Sri Lankan economist, Dr. Charles Wickramsinghe, traveling to the WTO conference with his country’s best interests in mind.

Certain moments and signifiers will be familiar to anyone who partook in leftist politics in the United States in the late 1990s. A series of paragraphs sketching out the life and ideological history of King, one of the protestors, alludes to the efforts to close Georgia’s School of the Americas, the readings of the works of Mumia Abu-Jamal, and the observance of the CIA’s unsavory role in global politics. Earlier in the novel, Victor, a young man recently returned to Seattle after traveling the world, is told by a participant in the protests that, “This isn’t a protest march. This is a direct action.” That in itself is telling: these are characters for whom that distinction is hugely significant.

The approach that Yapa takes in this novel is a meticulous one, often slowing time down at crucial moments—many of them featuring the conflicts between protestors and police escalating to a new level—and allowing his characters to drift through their own histories, zeroing in on the events and moments that continue to haunt them. Some of these feel very much of their time, either relative to specific protest movements or because of a more relaxed attitude towards international travel. Others feel much more universal: the revelation of an estrangement between two of the novel’s central characters, for instance, would feel as vital in any year.

That said, Yapa hasn’t chosen this particular setting simply for a backdrop. There are plenty of questions of power, and of shifting dynamics, that play out over the course of the novel—and there’s a payoff to the subplot involving Dr. Wickramsinghe that brings his ideological goals and those of the protestors into sharp focus. For some characters, the past looms large: as he oversees the police response to the protests, Chief Bishop at one point catches sight of the Space Needle, a structure that, it transpires, had long been a favorite of his.

Maybe he loved it because now here he was, a living breathing creature in the year 1999, an inhabitant of the future, and that future, the one they had imagined in 1962 when he had been a youngster dreaming, now seemed antiquated and quaint.

For these characters, past and present exist in close proximity. Reading this in 2016, that sense of the past looming large is hard to shake. One chapter near the end concludes with a line that seems to call out to the present day with sadness, horror, and urgency: “What about an unarmed nineteen-year-old scares an armed police officer?”

Several other novels released since 2000 have used other ways of incorporating then-recent history into their DNA. The central characters in Paul Auster’s 2005 novel The Brooklyn Follies debate the 2000 election—though this ends up falling more along the lines of perennial intra-left-wing Nader-versus-Gore arguments than the larger political clashes that dominated that election. The 2000 election also provided one of the backdrops for Rick Moody’s expansive 2005 novel The Diviners: there, one of the supporting characters begins a slow trek to Florida to aid in the recount, and the novel’s conclusion involves shadowy power brokers exerting a sinister influence over the outcome of the disputed election.

In the case of Auster’s novel, the then-contemporary events served as a backdrop, the sort of fuel for conversation that friends and acquaintances might have when hanging out. There weren’t any staggering political opinions or observations made. This isn’t to say that Auster’s fiction hasn’t occasionally delved into headier political territory: his 2008 Man in the Dark featured a surreal alternate version of the United States fragmenting in the aftermath of the 2000 election, while 2009’s Invisible grappled with liberal and conservative political ideologies over the course of several decades.

If Auster’s novel shows the way that current events filter down into quotidian moments and everyday conversations, Moody’s focuses more on the way that politics can push obsession into something more, and, in the end, questions the actual power balance inherent in our system of government. When I interviewed Mallon around the release of Finale, he mentioned that his next novel would be set during the later years of George W. Bush’s administration. “What’s going to be very odd for me there is, aside from its recency, is that I was a minuscule participant in the administration,” he said—during the George W. Bush presidency, Mallon had spent time at the National Endowment for the Humanities.

It’s also likely that the coming years will bring some sort of novel dealing with the Occupy movement. It appeared briefly in Jonathan Lethem’s Dissident Gardens, which focused on several generations of radicals living in and around Queens—but the version there was far removed from Occupy Wall Street, and seemed filtered through geographic distance, creating a sense of a political movement’s version of a game of telephone. (Given the number of writers listed at Occupy Writers, one assumes that it’s only a matter of time.) For now, though, we have Yapa’s novel as a recent reminder of the visceral power that can come from focusing on ideological struggle at a ground level—and the ways that that struggle can reverberate in our present moment. 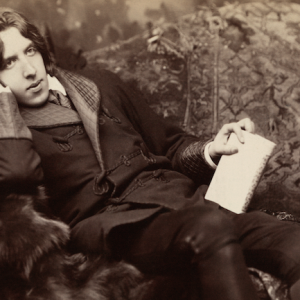 On this day, February 18, 1895, John Sholto Douglas, better known to us perhaps as the brutish 9th Marquess of Queensberry,...
© LitHub
Back to top