On Limey and Limes on British Royal Navy ships

Humans, guinea pigs, and some fish, birds, fruit bats, and primates cannot synthesize vitamin C, yet it is essential to our survival. Scurvy, the deficiency of vitamin C, was the scourge of both the far-wandering sailors and the location-locked soldiers who lacked a balanced diet. It was a common condition in military camps, and in prisons and asylums.

During the Irish Potato Famine, which impacted many countries in the 1840s, the sudden blight wiping out a staple food source raised the prices of other vegetables and dairy. About a million people died of scurvy, typhus, cholera, or dysentery, and about two million emigrated from Ireland.

In the United States, travelers making their way to and participating in the San Francisco Gold Rush of the mid-1800s suffered scurvy owing to poor food provisioning. At Fort Laramie, Wyoming, a last stop before the Rocky Mountains on the overland route to California, scurvy in 1858 was treated by a surgeon who made medicine of “a thick greenish-brown mucilaginous mixture” from prickly pear cactus, mixed with two ounces of whiskey flavored with lemon essence. In the American Civil War of the 1860s, scurvy along with other nutritional deficiencies mostly impacted poorly supplied Confederate fighters.

By that time, the cure for scurvy was known. The condition was most thoroughly studied at sea and had impacted the voyages of Vasco da Gama, Ferdinand Magellan, Captain James Cook, and Christopher Columbus. In the 1700s, physicians and surgeons working for the British Royal Navy tackled the issue: Was it a disease (like the venereal diseases that it was sometimes confused with) or a deficiency?

The preventative and treatment for scurvy was discovered and rediscovered many times throughout history, with citrus specifically prescribed as early as 1564. Sea captains of many different countries understood that citrus prevented or cured scurvy, yet their real-world wisdom was continuously passed over in favor of some theory that usually fit in with Galenic medicine by physicians on the mainland.

Suspected causes of scurvy included an excess of salt in the diet, copper poisoning, poor ventilation or moist air (good old miasma again), dirty clothing and living conditions, lack of potassium, and parasites living on cockroaches, among other ideas.

Symptoms of the disease are bleeding and swelling of gums, terrible-smelling breath, teeth and hair falling out, skin bruises, weak bones, reopening of old wounds, hallucinations, and blindness in the end. The running theory was that scurvy was a “disease of putrefaction.” People were thought to be rotting on the inside.

John French’s 1651 The Art of Distillation listed a recipe for “A Scorbutical Water or a Compound Water of Horseradish” that contained scurvy grass, brooklime, watercress, white wine, lemons, briony, horseradish, and nutmeg. It was to be macerated for three days and then distilled. “Three or four spoonfuls of this water taken twice in a day cures the scurvy presently.”

Many of these cures centered on acidity, fermentation, or carbonation, under the theory that they prevented putrefaction of the organs. Taking “fixed air” (carbon dioxide) was suggested by one chemist who recommended that sailors should mix lime juice and sodium bicarbonate to “be swallowed during the effervescence.” They got the lime part right anyway. Likewise, concentrated malt syrup was supposed to ferment into beer inside the stomach, with similar gas produced.

In an onboard clinical trial in 1747, Scottish doctor James Lind (1716–1794) divided patients suffering from scurvy into six groups who received one of the following: cider, sulfuric acid, vinegar, sea water, citrus (oranges and lemon), or a medicinal paste of garlic, mustard seed, and horseradish. Citrus worked best, but Lind didn’t dwell on it as a preventative so much as a curative treatment, and the British navy did not implement citrus rations for another four decades.

Captain Cook (1728–1779) was thought to have conquered scurvy in the 1770s, but in reality he managed it well with better onboard living conditions and frequent stops for fresh food. On his second voyage of 1772–75, Cook’s ship was supplied with many antiscorbutic options: malt wort, sauerkraut, “elixir of vitriol” (sulfuric acid), cider, Joseph Priestley’s soda-water-creating device, evaporated carrot juice, and a poisonous mix of antimony and phosphate of lime called Dr. James’s Powder. Cook thought concentrated malt was the solution, and due to his stature, his insistence that it was the best scurvy preventative delayed the implementation of citrus by a couple decades.

At the same time, sea captains were taking matters into their own hands, sourcing both citrus and other fresh vegetables when they went on land. Finally, by the 1790s, some Royal Navy ships were officially outfitted with lemon juice as a scurvy preventative. (The Merchant Navy implemented it much later.) It was served as a daily allowance with spirit, water, and sugar, or in a drink called a Negus with fortified wine in place of spirit.

With citrus identified as the solution, there was still the problem of how to preserve the fruit or its juice on board ships already notorious for having spoiled beer and undrinkable water after a few weeks or months. Lind recommended a “rob” of lemons and oranges reduced over a fire to boil off water. This was meant to be rehydrated on board with water or alcohol such as in a punch or with wine. Unbeknownst to them, the heat of boiling would destroy much of the vitamin C in the juice, and it would deteriorate even more after storage at room temperature. Others tried concentrating the lemons by freeze distillation, or by adding tartaric acid.

Other methods to preserve citrus juice included mixing it into olive oil, brandy, or rum, sometimes with added sugar. The latter would be a Daiquiri (rum, lime, and sugar) if limes had been used rather than oranges and lemons. But limes were not the preferred citrus of the navy until the mid-1800s. To support merchants from the homeland, Britain switched from purchasing large quantities of Mediterranean lemons to buying West Indies limes (particularly from Montserrat in the Lesser Antilles) owned by British merchants. For this affectation, Americans began to call British seamen “limeys.”

In both medical texts and drink recipes, there was confusion between lemons and limes, given the closeness of their names, the green color of unripe lemons, and the inability to identify which was which once squeezed. Though limes are more acidic than lemons and oranges, they contain significantly less vitamin C than either one, and the commercially prepared reduced lime juice on board was relatively useless against scurvy. Some physicians began to reverse their opinions as to whether the whole citrus thing was effective at all. Incidents of scurvy actually crept up again for a time after the switch to limes, but sea voyages became faster with the introduction of steamships, and scurvy declined again.

The Rose family of Leith, Scotland, was in the shipbuilding business and then later in the ship-supplying business. By 1871 the family company was called L. Rose & Company, “lime juice and wine merchants.” Lauchlan Rose (1829–1885) knew of the provisioning requirements of the time, which were lime juice in 15 percent Demerara rum, provided in four-gallon jars, but he didn’t feel that the sailors were getting the benefits of fresh lime juice. Around 1865 Rose had the idea to create a sweet juice drink for both sailors and the general public, a less medicinal (and less boozy) preparation than what was used on board.

Preservation of food by sealing glass containers and canning was relatively recent technology at the time, and Rose used what he learned about the process in his preparation. The Merchant Shipping Act of 1867 required British ships to carry fresh lime juice on board, and in the same year Rose registered a patent for “an improved method of preserving vegetable juices.” His trick was to employ sulfuric acid in an airtight container to preserve the juice, then it was sweetened and bottled as Rose’s Lime Juice Cordial. It was a success both domestically and on board. By 1893 Rose was able to purchase his own estates on which to grow lime trees.

In the 1900s the company diversified and produced lime marmalade and “promoted gin and lime as a social drink and the ‘discovery’ that lime juice could act as a hangover cure,” according to the book Limeys. Rose & Company later produced rum shrub, ginger brandy, and orange quinine wine. In 1957 the company was bought by Schweppes, makers of tonic water and mineral waters, which were both also used medicinally at first. Limeys author David I. Harvie calls Rose’s Lime Juice Cordial the “world’s first and still surviving branded fruit drink.”

Rose’s Lime Juice Cordial is used in place of fresh lime juice in some dive bars and homes, though it contains sweeteners, preservatives, and added coloring. The ingredient was immortalized in Raymond Chandler’s 1953 book The Long Goodbye, in which a character states, “What they call a gimlet is just some lime or lemon juice and gin with a dash of sugar and bitters. A real gimlet is half gin and half Rose’s Lime Juice and nothing else. It beats martinis hollow.”

The sentiment of the latter sentence is disputed, as is where the Gimlet got its name. One theory is that it was named after a Captain Gimlette. The second is that the drink is named after a small tool to poke holes in casks.

Vitamin C was not isolated until 1928, and it was finally proven to be the curative agent for scurvy in 1932. Experiments were conducted on guinea pigs, which had been found to share our common need for vitamin C through diet. This was not the first time guinea pigs have served as experimental subjects: They were shot up with wormwood until they died. Lavoisier and Pasteur both employed them in their experiments. And humans have sent them into space several times. What a ride. 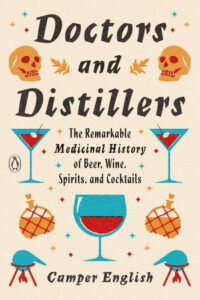 Excerpted from Doctors and Distillers: The Remarkable Medicinal History of Beer, Wine, Spirits, and Cocktails by Camper English. Used with permission of the publisher, Penguin Books. Copyright 2022 by Camper English.

Camper English is a cocktails and spirits writer and speaker who has covered the craft cocktail renaissance for over 15 years, contributing to more than 50 publications around the world including Popular Science, Saveur, Details, Whisky Advocate, and Drinks International. With a focus on the nerdy side of mixology, he has studied everything from the history of carbonation to the science of clear ice cubes. He has been awarded International Cognac Writer of the Year by the Bureau National Interprofessionnel du Cognac and Best Cocktail Writer at the Tales of the Cocktail Spirited Awards, and he has been voted as one of the 100 most influential people in the global drinks industry for several years running. His website is Alcademics.com. 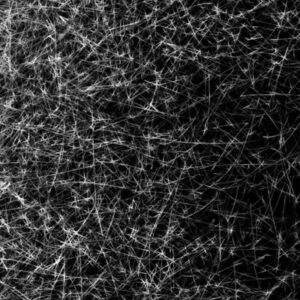