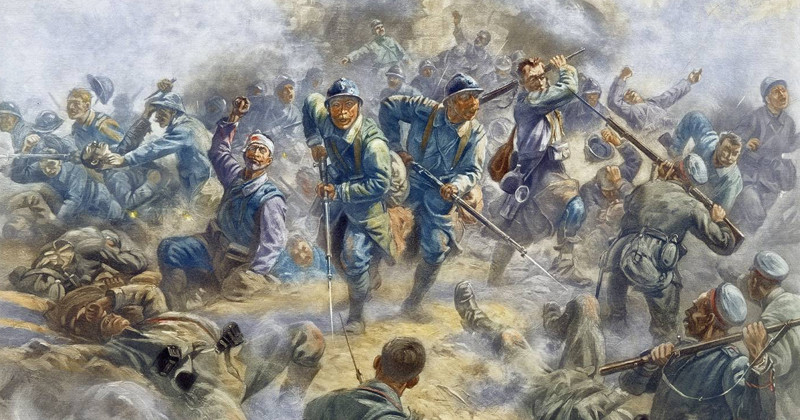 Nick Dybek on Trying to Learn Everything About WWI

It’s June of 1914, and Archduke Franz Ferdinand, heir to the Austro-Hungarian throne, has arrived in Sarajevo with his wife, Sophie. We know what happens next. Five assassins with ties to the nationalist group the Black Hand stake out the route of the Archduke’s motorcade, wait until the car is in sight, and toss a bomb. The bomb detonates and continues exploding—in one form or another—for the next four years: in Belgium at Liège, in France at the Marne, in East Prussia at Tannenberg, in Turkey at Gallipoli, through Italy, Greece, Arabia, and East Africa, eventually touching most of the inhabited world.

Yes, we know this one already. But what’s often left out is the fact that, though the bomb tossed at the motorcade did explode, it didn’t injure the Archduke. Apparently, he was able to bat the device away like a fly, and continue with his state visit, the plot foiled, the danger passed.

It was only later that day—after his car had taken a wrong turn, after the driver had decided to back up and turn around—that the Archduke and his wife found themselves stalled, by chance, directly in front of Gavrilo Princip, the leader of the assassins, as he stood outside a deli. What must Princip have thought in that moment? Whatever the case, he fished out a revolver and shot the Archduke and his wife. Two months later—again, quite improbably—a war that would leave millions dead and redraw the map of the world began as a result.

“Shallow men believe in luck or in circumstance. Strong men believe in cause and effect,” Emerson famously said. Maybe so, but one can’t help but wonder what the world would look like today if only the Archduke’s luck had held for another few hours, if only chance had been a little more kind.

Having spent the last six years researching and writing a novel on World War I, it’s appropriate, even lucky, I suppose, that my interest in the subject began by chance, as well. I might have missed the broadcast—if my teaching schedule had been different that quarter; if the car stereo had been set to CD instead of FM—in which case I would probably still be at work on my great Blood On the Tracks novel. But, as it happened, I tuned in to the BBC’s Newshour one night in the spring of 2011 just as a story came on about a memorial service marking the 90th anniversary of the Battle of Verdun—the war’s longest, and perhaps most infamous, battle—at a place called the Douaumont Ossuary.

I still remember my surprise at a single detail the reporter slipped into the story in his brisk British clip: that the bones in the Douaumont Ossuary—and there are thousands of them—were collected from the battlefield over a period of years by just a few people.

I was struck by the image because it so defied my assumptions. I’d long thought of World War I as the crucible of industrial modernity. And here was an image from after the war—men roaming by foot over the old battlefield, filling sacks with bones in order to arrange them in a memorial—that felt positively medieval. And there was an old fashioned poignancy in these peoples’ reverence for the very thing that had been lost in the war: respect for human life and the human body. I thought: What if that was your job, what would that work do to you?

I knew almost immediately that I’d try to write a novel based on this single image. But when it came to its historical context, I had only hazy impressions from college courses and novels by Hemingway and Remarque to go on. There was a lot to know about World War I: the movements of armies, the names of leaders, battles, revolutions, weapons. And countless smaller details: the likely cut of a dress, the customary greeting upon entering a French farmhouse, the price of wineglasses in an Italian shop.

“I found myself stuffing in details and anecdotes just to prove that I knew them. I found myself afraid to make a wrong choice—or, worse, an uninformed choice—until I was barely making any choices at all.”

My challenge, however, wasn’t a paucity of information, but its opposite. There was just so much to read. It soon became clear that I could tackle a book a week for the rest of my life and still own enough untouched tomes on the WWI to build my own mausoleum. There was something of an addict’s logic to the process: just one more book and I’ll know enough, just one more and this will be easy.

I wanted to leave nothing overlooked. I drew out timelines and research plans. I spent hours digging though Google trying to find the right sources—histories, memoirs, novels—and, once I had pared down my list, I spent many more hours in library reading rooms, poring over the texts.

I found myself stuffing in details and anecdotes just to prove that I knew them. I found myself afraid to make a wrong choice—or, worse, an uninformed choice—until I was barely making any choices at all. After a year of working on the novel, I had to accept that I was doing something wrong. The pages I’d produced felt detailed, but also overdetermined and unsurprising; in short: dead on arrival.

The French composer Claude Debussy once complained to a friend that he found so much of the music that was popular in his time to be overworked, needlessly complicated. “They smell of the lamp, not of the sun,” he said. It was obvious that my manuscript smelled of the lamp, but less clear what I needed to do differently to let in some sun.

Which is all to say that, in my experience, there is such a thing as too much research. Too many facts can squeeze the breath out of a text, yielding a fictional world that feels authorial, unnatural. And, if one of the goals of writing a novel is to produce a narrative that feels life-like, and, if life-like means as surprising as an Archduke’s assassination, as random as years of research occasioned by a twist of the radio dial—then perhaps the writing process must embrace that chance, that chaos. It’s difficult, and, as a cultural Catholic, counterintuitive, to place one’s faith in chaos, to count on the significance of collision. But I’ve found such faith to be crucial.

I’d had Debussy’s line in mind, and by chance I came across a note about his funeral on the back of an old LP. He died of cancer in March of 1918, four days into the German spring offensive, when Paris was being shelled in a last-ditch effort to break the French lines. Nevertheless, a small group of friends and family insisted on a funeral for the composer, a procession that crossed all the way from his home near the Bois de

Boulogne in the west of the city to Père Lachaise in the east. Like the detail about the ossuary I had heard on the BBC broadcast, and unlike so many other facts and images I had encountered in my research, this one yielded an immediate imaginative spark. For once, I trusted that feeling, and soon an important character in my manuscript had become one of Debussy’s mourners, cringing at the whistle of shells overhead, trying not to meet the eyes of people who stare at the procession with perplexed amazement.

By chance again, I spotted a slim paperback on one of the tall shelves of the Strand in New York City—I used a stepladder to retrieve it. This book, The Living Unknown Soldier by Jean-Yves Le Naour, tells the story of Anthelme Mangin, a French soldier who was repatriated from a German POW camp after the war, who showed up at the Gare de Lyon without identity papers or any memory of his past. In an effort to identify him, the doctors at the asylum in Rodez published his photograph in the papers. They received thousands of responses from families claiming he was their son or husband, many of whom allowed that the man in the newspaper had different colored eyes than their own loved one, or was half a foot shorter. Mangin’s story resonated with me in a way that so many other fascinating narratives had not, and he now provides the basis for a central character in my own novel, an amnesiac soldier in a military hospital in Bologna.

When I eventually traveled to Verdun to see the cratered landscape I would describe so many times, I was especially moved by a single broadside I just happened to find buried in a corner in one of the forts east of the ossuary. By chance, my wife and I paused and tried to puzzle the text out in the bad light, with our worse French: a nurse in Bar-le-Duc recounted her care of a soldier whose face had been erased by an explosive shell. She wrote of the day his parents arrived at the hospital. After standing by this soldier’s bedside for a few moments, the soldier’s father turned to her and said, “I appreciate what you are doing, but can you take us to see our son now?” I couldn’t let go of this line I chanced upon, and a version of it made its way into in my book.

I’ve found that writing and researching a novel is an experience—one that, when it’s going well, can feel as dynamic and unpredictable as reading a great book, or even falling in love. I’ve learned to accept that this experience can and perhaps should feel as chaotic as living, and to hope that the pages that result from this strange work will feel alive as well—to hope that the wrong turn is just the right one, that the car stalls outside the deli and the story ignites.

Nick Dybek is a recipient of a Granta New Voices selection, a Michener-Copernicus Society of America Award, and a Maytag Fellowship. He received a BA from the University of Michigan and an MFA from The Iowa Writers’ Workshop. He teaches at Oregon State University. He is the author of When Captain Flint Was Still a Good Man and The Verdun Affair. 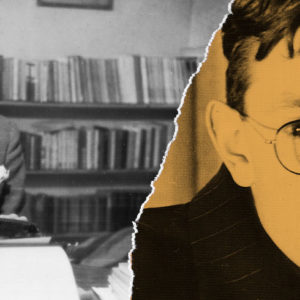 The summer of 1943 found George Orwell, English socialist man of letters, reaching the end of his patience with his job at the BBC....
© LitHub
Back to top