How to Understand America, One Pattern at a Time

From Ireland to Iowa, When Words Fail, Draw

The notebook is hand and hard-bound. The cover marbled light and dark blue with a bold red spine. I started filling its unlined, unruled pages shortly after my first book was published. I intended it as a diary, of sorts. Because my published book was generating opportunities beyond my maddest expectations; because my sentences were suddenly being called upon to serve something they’d never had cause to before: a career. And so, I needed some other means by which to record, to retain. Inside the white square of each page, I traced, as a template, a line around a roll of Sellotape. Template by template, inside each line, I copied a configuration of shapes. Stripes, swatches, stipples, diamonds, dots.

This is how the patterns, and their book, began.

The tiles of the kitchen floor were my first page. The kitchen of the terraced house I rented with my boyfriend on the harbor-facing main street of a village in rural Ireland. The floor which sloped seawards and was prone to tidal flooding. The tiles small and square, glazed a misty brown to match the stained grout separating them. We had lived there five years when, one night, in the living room, I asked my boyfriend what color the kitchen floor was.

By the beginning of autumn, I had filled 14 pages. From the perforated steel seat in Derry bus station to a chain-link fence spanning the perimeter of a forest in Zagreb. I saw more new places in the three summer months of 2015 than in the preceding six years combined.

Before leaving for America, I told people where I was going and they told me the things they knew about the place where I was going: “Iowa Writers Workshop,” the writers said. “Corn husk country, flat and landlocked.” “The first state to hold a caucus.” “An album by a band called Slipknot.”

The first pattern I drew in America was a network of colored lines at the edge of an airport runway in Chicago O’Hare. Red touching yellow, yellow touching green, green touching white. I had flown from Edinburgh International and was flying on to Cedar Rapids. After I drew the runway, I wandered to the west end of the ticketing lobby in Terminal 2 and stumbled across a restored aircraft. An F4F-3 Wildcat, according to the information board, flown, valiantly, by the airport’s namesake during the Second World War. I tried to draw the red circle inside a white star inside a black circle on its wing, but it was too hard to evenly match each point. I abandoned it as my departure gate opened.

I drew another star over the imprint of the failed one. I found it marking the spot where the cup is supposed to sit at the center of the black plastic base of a coffee maker. Again, it was five-pronged, an American flag star.

The coffee maker was in the kitchenette of a guest cabin; the guest cabin was in the corner of a large garden; the large garden was on the leafy outskirts of Iowa City, where I stayed all the way through to winter on a residency for international writers. I was being hosted by a local family, but my daily companions were from Cuba, Cambodia, Malaysia, Mongolia, Singapore, Sweden, Saudi Arabia…

At first, it was incredibly strange, and then, after a while, it was all perfectly normal.

Iowa is a city in a forest, the Burmese writer put in a poem. Downtown, people sat around on painted benches leafing paperbacks and plunking the keys of open-air pianos. Tall trees reached up from the paving, and on the residential outskirts, there were even more—not just tall, but thick-trunked and glutted with branches. In the garden surrounding my cabin, there was a feeder constructed especially to accommodate the long tongues of hummingbirds, another designed to prevent squirrels from scoffing all the seed. The Iowan garden birds were so garishly coloured in comparison to those I knew from home. The brown finches and brown sparrows and brown wrens. They shared their Iowan branches with small furry mammals I had previously believed existed only in cartoons. Chipmunks, racoons, opossums—going about their business oblivious to the concrete city in-between their trees. I arrived when the leaves were green, garish as the garden birds. I watched them curl and carry through their cycle of yellow to red to brown to dead.

Star Spangled Banners, mounted on the clapboard of my neighbors’ houses, buffeted in the lukewarm breeze. In my inaugural week, jack-o-lanterns started to appear on front doorsteps. Skeleton skull lamps were planted in lawns, pillowslip-ghosts dangled from porches, and I realized it was going to be almost Halloween for the entire time I spent in America.

The first trip I took outside Iowa City was on a chartered coach to Chicago. I was relieved to be traveling by road as opposed to through sky. I was looking forward to gazing dreamily at mile on mile of unfamiliar landscape. Cornfields, as promised, spread into the distance on both sides of the motorway. Its ears had already been removed, its foliage had wizened and turned sepia. Sometimes, there was a monstrous farm contraption, a statuesque barn. Good Country People, I thought for every one we passed. After the first hour I realized the scenery wasn’t going to change—that there is ample space in America to drive for four hours straight with almost exactly the same view.

I lowered my head to read instead. Iowa became Illinois became the skyscrapers of downtown Chicago. My book was Gilead by Marilynne Robinson. This is an interesting planet. I read. It deserves all the attention you can give it.

On Iowa Public Radio, the weatherman seemed to be forever tracking thunderstorms which never actually arrived. In the guest cabin, template by template, I drew every pattern. The welcome mat, the kitchen roll, the Celtic salt shaker. And I ran every morning, timing it to the same 20 minutes I used to run at home. At home, this took me on an entire circuit of my village. The seafront, the pub, the cow-field, the graveyard, the other pub. In America, in the space of 20 minutes, I barely seemed to cover any ground at all.

I started spending my days in the university’s art building. I fell in love with its weathered steel edifice overlooking a limestone bluff and quarry pool, with the way in which small bubbles rose incessantly, mysteriously, to the water’s leaf-scattered surface, and with the mouse-click, foot-scuff, throat-clearing silence of the library. But its overwhelming variety of fascinating books was too much for me. I’d devote a week to a single one, returning repeatedly to a collection of Agnes Martin’s writings and a compilation of American landscape paintings, and in the landscape book, to the paintings of Martin Johnson Heade. His plenteous trees, suspenseful skies and generalized absence of people made me think, again, of an America only the animals can see.

Somebody tells me—I can’t remember who—that Iowa has no vanishing point. And so landscape painters must use rail lines instead, to create the illusion of perspective.

The thunderstorms caught up with me at last, caught me off guard. I couldn’t comprehend the dogged strength of the Iowan showers. I am used to rain which wafts and dribbles, rain so light you barely know it’s there until it has surreptitiously soaked you. One night I bought a tub of hot soup downtown and carried it back to the guest cabin through a thunderstorm, holding it out ahead of me like a beacon. By the time I reached the welcome mat, even though my shoes were overflowing, my soup was still eerily warm.

An artist’s life is adventurous, Agnes Martin said. One new thing after another.

The second time I leave Iowa City, I’m flying to Denver, but not to actually do anything in Denver, only to walk swiftly, worriedly, through the domestic section of its International airport. Across epoxy floor coatings and steam-rolled escalators, past coffee docks and restrooms and kiosks selling 20 different slightly disgusting flavors of popcorn, to take another flight, to Seattle. The view from my window seat on the way down, from the “friendly skies” above Colorado, was astonishingly strange. Nodding donkeys like dinosaurs and fields like clock faces, with one hand an irrigation system and the other, a road.

I forgot to draw the fields from the sky. On the ground I remembered I needed some pattern to prove I had once touched down in the shadow of the Rocky Mountains. I drew the markings of another runway.

The markings of another runway, the embossing on another sheet of toilet paper, the upholstery of another bus seat—I realized how essentially banal all my patterns were, that these banalities are inescapable, that I had reduced every new place to the size of the circumference of a roll of Sellotape.

That once travel has finished broadening it, so the mind contracts.

The last time I leave Iowa is not for home, or at least, not directly. A flight from Cedar Rapids to Chicago O’Hare, from Chicago O’Hare to Washington DC, and a final coach to New York City, entering Manhattan at ground level. Ladders stuck to the outside of buildings, a ten foot tall projection of Michael Flatley and 39 pages of the pattern book filled. My hotel is on the periphery of Times Square. Forty-four floors up, from my window I can only barely see the clouds. I can’t see the street at all.

Forty-four floors up, stranded between cloud and street, I washed my socks in the sink, scraped the dirt from beneath my fingernails with a tiny stick. Another hotel room with an ironing board, an office chair, a mini-microwave and complimentary nail kit. Five towels of varying size, a supplementary pillow, a hallmarked bathrobe. And everything white—a white so brilliant it instantly, emphatically, grotesquely, shows up every bobble on my jumper, every strand of hair I shed.

What the Critics Picked: The NBCC Award Judges on the 30 Finalists 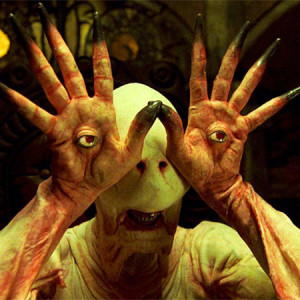 For many readers, fairy tales serve as an introduction to storytelling. Perhaps that’s through short tales or fables recited...
© LitHub
Back to top
Loading Comments...