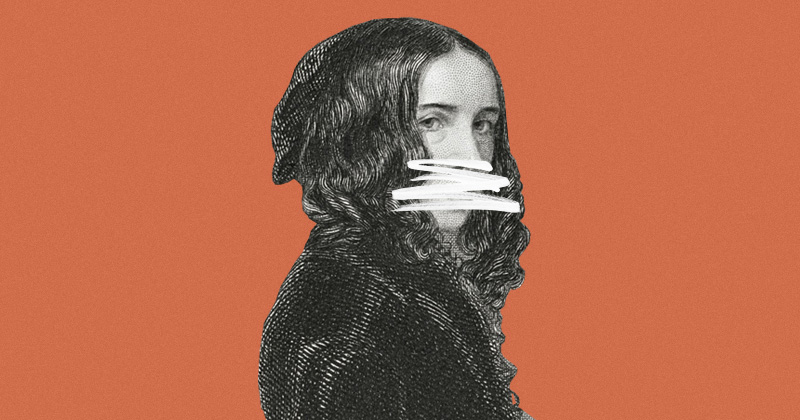 VIA University of Texas Press

How to Suppress Women’s Writing: “She Only Wrote One Good Book.”

Subversive Works are Buried, While Stereotypical Ones are Upheld

In about 1971 I was teaching Charlotte Brontë in a women’s studies course and decided to use her Villette instead of Jane Eyre. The number of different publishers who have in print different paperback editions of Jane Eyre I know not; I found several editions in the bookstore of my university (and one more, a year later, in the “Gothic” section of the local supermarket). But there was not one edition of Villette in print in the United States, whether in paperback or hardcover, and I finally had to order the book (in hardcover, too expensive for class use) from England. (The only university library editions of Villette or Shirley I could find at that time were the old Tauchnitz editions: tiny type and no leading.)

In three women’s studies classes in two separate institutions (1972–1974) I asked my students whether they had read Jane Eyre. About half had, in all three classes. Of these only one young woman (almost all of the students were women) knew that Charlotte Brontë had written any other novel, though a considerable number (looking, they explained, for another “Brontë book”) had happened upon Wuthering Heights. Most of my students who had read Jane Eyre had done so in their early teens and most were vague about exactly how they had come to read it, although most were also very clear that it was not through assigned reading in school. It seems to me that these youngsters, who had somehow “found” Jane Eyre as part of an amorphous culture outside formal education (librarians? friends?) would have gone on to read Shirley and Villette—if the books had been physically available to them. But they were not, and Charlotte Brontë remained to them the author of one book, Jane Eyre. None of them, of course, knew of Emily Brontë’s poems, let alone her Gondal poems.

Another anecdote: a female graduate student in English, to whom I had loaned Ellen Moers’ Literary Women, burst in, eyes wide, passionately declaring, “You mean she wrote that?” “She” turned out to be Elizabeth Barrett Browning and “that” was “A Curse for a Nation,” especially the lines,

A curse from the depths of womanhood
Is very salt, and bitter, and good.

All she had previously read of EBB’s was a few of the Sonnets from the Portuguese. She—as I—had been convinced that this author’s only good work was a few over-anthologized love poems, that the substitution of Devoted Wife for Poet was true, and that “Aurora Leigh” was a dull, silly piece of journalism manqué whose feminism (if it had any) was timid and dated. (Alas, Woolf herself, taking this view in The Second Common Reader, makes subtle fun of a poem she nonetheless confesses apologetically to liking. It is Ellmann’s phallic criticism, from the “unnaturally close” connection “between a woman’s art and a woman’s life” to the emphasis on the constriction of her life necessarily leading to faults in the work.)

“If a woman writer presents herself as a public, political voice, delete this aspect of her work and emphasize her love poems, declared (on no evidence) to be written to her husband.”

I must add, embarrassingly, that I shared my student’s reaction, that I assumed Jane Eyre to be Brontë’s best book (and the others vaguely dull) until a description Kate Millett gave of Villette (in Sexual Politics) sent me on a hunt for Villette which eventually broadened to include Shirley, The Professor, Charlotte Brontë’s juvenilia, Jane Austen’s juvenilia (astonishing Kafkaesque stuff), Fanny Ratchford’s books on the Brontës, and Emily Brontë’s Gondal poems.

Another confession: three times in my life I have had an aesthetic reaction so intense that my first response was, “Who is that?”—at my first hearing of Joplin’s “Maple Leaf Rag,” at hearing a Carmen who was not only singing but also (impossibly) speaking (it was the early Maria Callas), and at the following lines:

All my walls are lost in mirrors, whereupon I trace
Self to right hand, self to left hand, self in every place,
Self-same solitary figure, self-same seeking face.

These chilling, trancelike, almost schizophrenic lines with their technical brilliancy (“s” is the hardest repeated sound to handle in English; these six lines have thirteen s’s—and two z’s, for good measure!) could not possibly have been written by the docile spinster whose heart was like a singing bird and who spent her life writing love poems or simple-minded nursery fairytales. Of course they were not; that persona (another recategorizing) has nothing to do with the real author of the poems, who is the poet Christina Rossetti. (Moers connects the above lines to the kind of consciousness shown in Diane Arbus’s photographs or Carson McCullers’s perceptions of freakishness.)

One might argue—and justly—that many male writers are also represented by only one book or one group of poems. I would answer first that the damage done the women is greater because women constitute so few of the total in anthologies, classes, curricula, and reading lists at any level of education. Moreover, the real mischief of the myth of the isolated achievement, as it is applied to the “wrong” writers, is that the criteria of selection are in themselves loaded and so often lead to the choice of whatever in the writer’s work will reinforce the stereotypical notion of what women can write or should write. Some unpleasant possibilities: If a woman writer presents herself as a public, political voice, delete this aspect of her work and emphasize her love poems, declared (on no evidence) to be written to her husband—Elizabeth Barrett Browning.

If a woman writer is frank about heterosexuality, delete any of her work that depicts male inadequacy or independent female judgment of men—Aphra Behn.

If a woman writes homosexual love poetry, suppress it and declare her an unhappy spinster—Amy Lowell.

If you still have trouble, invent an (unhappy) heterosexual affair for her to explain the poems—Emily Dickinson.

If a writer is openly feminist, delete everything of that sort in her work and then declare her passionless, minor, and ladylike—Anne Finch, Countess of Winchilsea.

“I think it no accident that the myth of the isolated achievement so often promotes women writers’ less good work as their best work.”

If she is not easy to edit, writes ten-act plays about women going to war to rescue their men, plays about women’s academies becoming more popular than men’s academies, and endless prefaces about men, women, sexist oppression, and the mistreatment she herself endures, forget it; she’s cracked—Margaret Cavendish, Duchess of Newcastle.

If she writes about women’s relationships with women and “women heroes” (in Hacker’s phrase), print a few of her early lyrics and forget the rest—H. D.

If she writes about women’s experiences, especially the unpleasant ones, declare her hysterical or “confessional”—Sylvia Plath, Anne Sexton.

If she carefully avoids writing about female experience and remains resolutely detached, polished, impersonal, and nonsexual, you may praise her at first, then declare her Mandarin, minor, and passionless—Marianne Moore.

I think it no accident that the myth of the isolated achievement so often promotes women writers’ less good work as their best work. For example, Jane Eyre exists, as of this writing, on the graduate reading list of the Department of English at the University of Washington. (This is the only PhD reading list to which I have access at the moment. I mention it not as a horrid example, but because it is respectable, substantial, and probably typical of first-rate institutions across this country.) Villette does not appear on the list. How could it? Jane Eyre is a love story and women ought to write love stories; Villette, “a book too subversive to be popular,” is described by Kate Millett as “one long meditation on a prison break.” 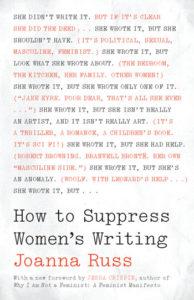 Hugo and Nebula award–winning author Joanna Russ (1937–2011) was a widely respected feminist science fiction writer best known for the novel The Female Man. She was also a professor of English at the University of Washington who published several collections of essays and literary criticism. 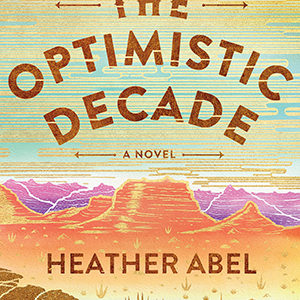 Utopia Is Greek for “No Place” It was April 1990, not even four months into the new decade, and already Nelson Mandela...
© LitHub
Back to top
Loading Comments...