A Humble Writer Reports From the Land of Movie Stars

I am not a movie star.

Authors just aren’t; we’re not, with very few exceptions, notable or noted. People may read our books, but they will pass us on the street unaware. And most of the time, I like it that way just fine.

But when I went to Hollywood to research my novel, The Girls in the Picture, for the first time, I felt a little. . . slighted.

I wanted to stay at the Hollywood Roosevelt Hotel, because it’s one of the last remaining buildings from the era of my novel, which mostly takes place in the Hollywood of 1915-1935. Almost every building and mansion from that era is gone now; Los Angeles doesn’t take care of its past the way other cities do. But the Hollywood Roosevelt—opened in 1927 and financed by movie pioneers like Mary Pickford (one of the protagonists of my novel), Douglas Fairbanks and Louis B. Mayer, site of first Academy Awards banquet in 1929—still stands. Right in the middle of Hollywood Boulevard, across the street from the famous Grauman’s (now TCL) Chinese Theatre.

I made my reservations, flew from Chicago to LAX, rented a car, and drove to Hollywood. My mission: research as much as I could about the Hollywood of the 1920s, particularly by spending time at the Margaret Herrick Library of the Academy of Motion Picture Arts and Sciences, reading through the scripts and papers of Mary Pickford and Frances Marion, my two girls in the picture.

I valet-parked my rental car—a midsize sedan, nothing fancy because I’m an author—and checked into the hotel. The lobby is fantastic, still very of the period in which it was built—high ceilings, Moroccan tiles, arched doorways, palms everywhere. It really is like stepping into the 1920s. The guest rooms are fine—small and older, obviously, but nicely modernized. I didn’t stay in a suite—again, I’m an author.

I’d never felt more like what I was—an ordinary person, an author nobody recognized.

I soon discovered that the Roosevelt is a hot spot, day and night, always full of the beautiful people of Hollywood—aspiring, sometimes actual, movie stars. The pool area intimidated me; there was no way I was going to venture out there, not middle-aged, Midwestern me. But it was fun for people-watching, which is my favorite pastime. And I had a lot of pretty people to watch there! It didn’t really bother me, either, that the first time I sat down in the bar area next to the pool, I wasn’t immediately waited on. I accepted that, because I was in Hollywood, and I understand it’s a company town, and I’m not in that company. Except that I sort of was, because on my schedule was also dinner with a producer who had optioned one of my books, but obviously nobody could tell that by looking at me and it really wasn’t very exciting or interesting in the Hollywood scheme of things.

The point is, I was not a tall, young, beautiful—or obviously powerful—person.  OK by me. I’m proud of my accomplishments but I understood they’re not accomplishments respected in that town.

As the days went by, I got a little tired of being ignored. Specifically, I grew weary of having to wait twice as long as anyone else to have the valet bring my car around, whenever I had to go out—including the day I had my first appointment at the Margaret Herrick Library.

I’d call down, as instructed, before I needed it. But when I arrived at the valet stand, it was never there. I’d wait, and I’d wait, and I’d watch flashy cars—Bentleys and Mercedes and Maseratis—roar up so that their young, tall, beautiful—or powerful—owners could get in them and drive off from whatever Very Important Appointment they’d just had. Finally, whenever the parking lot was empty of fun cars, someone would go fetch my little rental sedan. I’d tip well, I’d smile my thanks, but day after day, it was the same thing.

I was not a movie star, real or aspiring. I was not a mogul who had any favors in the industry to grant. I’d never felt more like what I was—an ordinary person, an author nobody recognized.

Until I got to the library.

If you don’t know how a research library works, it goes like this: You make an appointment ahead of time, and when you make the appointment, you have to state your occupation, your reason for needing the materials—is it for an article, a book, if it is, when will it be published, what have you published before, etc., etc. In this case, I also had to provide my editor’s name as a reference.

After I gave my name to the receptionist, I was given a pass and shown to the research room, where I presented my pass and was told to sit down at a table and wait for the materials to be brought to me.

I sat down, I twiddled my pencil (always pencils, no pens are allowed near research materials), and I waited. I doodled something on my notepad. I couldn’t check my phone because phones weren’t supposed to be used in the room. I brooded a bit, still smarting at having to wait half an hour to get my car that morning, finally giving in to feeling a little inadequate by Hollywood standards, missing Chicago where I fit in just fine, you don’t have to be young and beautiful there….

Someone was staring at me. The sensation was so startling, given the previous days’ experiences, I almost leaped out of my chair. I glanced away, then looked back. Yes, someone was definitely looking at me—at me! A young woman wearing a name tag, obviously an employee of the library; she was standing near the entrance of the room, staring, and then she beckoned another librarian over to her, and they both looked at me, and smiled, and I looked at my shirt to make sure I hadn’t spilled coffee on it. Finally, they came over to me.

“Are you—are you—Melanie Benjamin?” one of them asked in a nervous voice.

I stopped looking for coffee stains on my shirt.

“OH MY GOD!” they both squealed (well, in hushed tones; this was a library, after all). “We love your books! THE AVIATOR’S WIFE is one of our favorites! You’re here to research another book, right? Please tell us what it’s about, we can’t wait to read it!”

I fell in love right then. I fell in love with librarians—not that I wasn’t already in love with librarians, but at that moment, I would have sent a love letter to each and every one. And I asked them to sit down and we talked—or rather, they asked questions and I answered with a studied modesty that was difficult to pull off under the circumstances. And when they somehow produced one of my books—I don’t know why they would have had it, it was a research library, after all—I proudly signed it with an extra flourish.

My materials arrived, and I spent the day immersed in the past, and when I drove back to the Hollywood Roosevelt (and handed my car over to the valet with a stern warning to be quick about it, next time), I went out to the bar and ordered a drink. To my astonishment, it arrived in record time.

Then I knew. It was me that was different, not them. And it was all because of what had happened at the Margaret Herrick library. That’s what librarians can do—they can make middle-aged author feel like a movie star.

Melanie Benjamin is the New York Times bestselling author of The Aviator’s Wife, The Autobiography of Mrs. Tom Thumb, Alice I Have Been, and more. Her novelThe Girls in the Picture came out in paperback this year, and her new novel Mistress of the Ritz releases next month. She lives in Chicago. 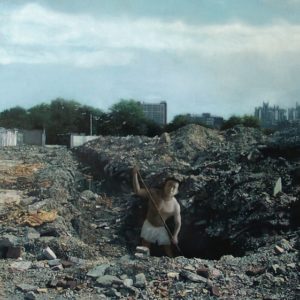 The idea of a single day devoted to the earth is absurd. In the 49 years since the first Earth Day was celebrated, human...
© LitHub
Back to top