On War, Troy, and the Slow Time of Classic Literature

An oddly postmodern thing happens right near the beginning of Virgil’s ancient classic the Aeneid. Having fled Troy in defeat from the Greeks, and destined to found the great Roman civilization, a defeated, beleaguered Aeneas and his men wash up on the northern coast of Africa near Carthage. Before long Aeneas locates the bustling port city, eventually stealing into the magnificent temple of Dido the queen. As he is acquainting himself with the surroundings he discovers an elaborate depiction of the very war that he is a refugee from:

Wondering at the good fortune of the city,
And admiring all the things the makers had done,
The workmanship of what was told on the walls,
Suddenly he saw depicted there,
One after another, the scenes of the Trojan War,
Famous through all the world . . .
Aeneas stopped, and weeping at what he saw,
Said, “Is there, Achates, anywhere on earth
That does not know the story of our trouble?”

Imagine it: the catastrophic war that has wiped your home off the face of the Earth is now the stuff of legend, famous clear across the entire known world. The beloved comrades you watched die as you struggled to defend your homeland are now wrought exquisitely into the walls of a queen’s temple. You even see your own self, fighting the war you have just fled from. It is a curiously modern moment: Aeneas sees the horrific reality he has just escaped as a story told by foreigners a thousand miles away, not so different from, say, a refugee from Venezuela, or Yemen, or Syria, or Myanmar escapes to a more stable nation, only to see the story of her nation’s escalating tragedy—and maybe even herself—broadcast on CNN.

It was years ago that I first read the Aeneid, in classicist Robert Fitzgerald’s standard-bearing English translation, but I had forgotten this scene, and I only mention it now because I have discovered it anew in poet David Ferry’s extraordinary new translation of Virgil’s classic. I do not recall what I thought of this scene when I first encountered it, but, reading it today, it seems prescient of the world in which I live. For the story of the Aeneid is nothing if not a story of how war begets war and destabilizes the world—fleeing destroyed Troy, Aeneas will obliterate the Latin civilization in order to found Rome, and his descendants will come to conquer the very Carthage that honors his loss.

When he discoverers his story in Dido’s temple, Aeneas is at once bewildered, saddened, comforted, and inspired—he also feels some pride to know that the deeds of he and his fellow warriors have become famous. This newfound fame encourages Aeneas, making him bold enough to reveal himself to Dido, who is amazed to learn that this miraculous hero is in her very court. Soon the two have fallen deep into a romance that has been celebrated for thousands of years in myths, ballets, paintings, and novels.

Reading this passage of the Aeneid today has made me wonder what extraordinary events of our modern world would deserve this treatment. What recent parts of history have become so famous as to travel to the ends of our globalized world? What individuals have become so famous, inspiring, and mythic that even far-flung cultures are re-telling their deeds? What events are so amazing that we would feel immensely honored if their heroes happened to visit our land?

These would have to be immensely extraordinary doings to match up to the tale of the Trojan War, which is one of the greatest stories ever told. By the time Virgil wrote the Aeneid—roughly 1,000 years after the Trojan War was first told—this tale was still so universally known that he could assume anyone who might read his epic poem would know the ins and outs of it. In the centuries after Virgil’s death in 19 BC the story continued to live on through the ages (in no small part because of Virgil’s contribution to it), and it is still so famous, a good 2,000 years after Virgil, I can safely assume that most people reading this column will know the broad outlines of it. In fact, just a couple of months ago it again popped up in my life (as it does, seemingly every few months) as I watched the California Shakespeare Theater perform Marcus Gardley’s Black Odyssey—a fusion of the African-American experience and the story of Odysseus’s return home from the Trojan War. It is one of the most canonical stories humans have ever told, one of the most re-told, and one of the oldest, likely even pre-dating the Book of Genesis.

It has also accumulated a distinguished literary pedigree. Perhaps ten centuries after Homer, Virgil wrote the Aeneid, and then fourteen centuries after the Aeneid, Dante Alighieri made it the foundation of his Divine Comedy, widely considered the greatest work ever written by an Italian and acknowledged as establishing the modern Italian language. Famously, Dante is accompanied through Hell by Virgil, but the great Florentine doesn’t just use him as a guide to the underworld—he also draws heavily from the Romanized variants of Greek mythology that Virgil deeply wove into his Aeneid, creating his unique vision of the afterlife. These ideas that Dante created from this fusion of Christian and Greek theology proved to be so vivid and compelling that for over a thousand years they have transformed our conception of what awaits us after death.

Through the Divine Comedy, the Aeneid’s influence continued to live on and on. For instance, Milton’s pivotal portrayal of Satan in Paradise Lost—which gave him a depth that no prior author had ever given him and made its own contributions to our image of evil—grows out of Dante’s Inferno. Jorge Luis Borges also held Dante as one of his key authors, once declaring the Divine Comedy, “the best book literature has achieved”—under the influence of this master Borges would go on to revolutionize our concepts of time, history, originality, and infinity. (Cervantes’s Don Quixote, which of course was a huge influence on Borges, among others, was also inspired by Virgil (there is even a scene in Cervantes’s masterpiece that references Aeneas’s discovery of himself in Dido’s temple, but I digress . . .) Undoubtedly there are authors working right now who are heavily influenced by Borges, and maybe even Milton and Cervantes—and thus also Dante, Virgil, and the Trojan War.

This column began with a war in the Middle East that storytellers began recounting 1,000 years before the birth of Christ, and we have followed it to North Africa, Rome, Italy, Spain, and Britain—and all the way to Borges clutching his bilingual copy of the Divine Comedy in Argentina in the early 1940s. I find this one of the greatest things about the literary tradition: it works on the longest timescales of human history, and it easily perforates borders. Literature conducts ideas across continents and through time with a startling efficacy: in the case of the Trojan War, it has traveled all throughout the world and back to the dawn of recorded history. Literature is the medium that is most conversant with humanity’s master narratives, the one that has done the most to form them and make them so indispensible and famed.

Perhaps now, when we are all quite taken by new media, it is important to keep this much slower, low-technology medium in mind. It is quite easy to be impressed at how social media has taken already-compressed cycles of 24-hour cable news into nuclear territory—our national political debates have reached a sort of ecstatic frenzy in which, just minutes after the latest talking points, scandals, and memes hit the Internet they become the subject of tens—sometimes hundreds—of thousands of Tweets and Facebook posts, giving them an oppressive ubiquity. Each twist in this neverending onslaught of raw political incident seems to hit with a maddening regularity, saturating us every which way we look.

There is only so much of this anyone can take, and perhaps we don’t need as much of it as we consume. I myself have become more and more of a social media junkie, but increasingly I ask myself why. Who can even recall the hashtags that were being used to mock poor Anthony Scaramucci just two months ago, much less what the memes du jour were at the beginning of Donald Trump’s Presidency? When I step away from the online frenzy and immerse myself in the longer rhythms of something like Virgil, I feel a profound, visceral relief, and I also feel a whole new perspective taking over. If the Trojan War is one of the grandest narratives ever constructed, the latest political Twitter memes are like microscopic pieces of narrative thread—from the perspective of the everlasting present they may seem hugely important to us, but from the perspective of Virgil they are puny.

I don’t mean to say we should all just check out, but I do think such perspective is something many of us can benefit from right now. We have grown accustomed to calling our national politics “not normal” and “unprecedented,” and I will readily agree that in many ways things are quite bad, but they are still very, very far from the worst this country has seen. To see just how bad things have gotten, read the latest piece by the indispensible historian Adam Hochschild in The New York Review of Books, where he recounts what occurred in the United States during and immediately after World War I. You will see that just 100 years ago there was mass incarceration of immigrants, the shutting down of newspapers and magazines, speeches about executing editors for “treason”—Congress even refused to seat a fairly elected Representative simply because he was a member of the Socialist party. As Hochschild writes,

As our newspapers and TV screens overflow with choleric attacks by President Trump on the media, immigrants, and anyone who criticizes him, it makes us wonder: What would it be like if nothing restrained him from his obvious wish to silence, deport, or jail such enemies? For a chilling answer, we need only roll back the clock one hundred years, to the moment when the United States entered not just a world war, but a three-year period of unparalleled censorship, mass imprisonment, and anti-immigrant terror.

As Hochschild writes at the end of his piece, we all must stay engaged and informed to ensure that this Presidency does not become nearly as oppressive as that of Democrat Woodrow Wilson’s, who spearheaded these odious deeds. But I think we might also use a little better filtering when we decide just how important any given outrage is. We might subject the latest transgression to the Virgil test: if an artisan were carving this story into a palace wall half a world away, which incidents would make the cut? Which developments in this critical American saga would make it into the grand narrative of these years that may one day be passed down through the ages? Which things would we want to see if, like Aeneas, we happened to suddenly discover this story being told far away? And which developments are just noise, things that sap our energy and attention but that ultimately are not worth so much fuss?

Literature from the Longue Durée

The Tale of Genji by Murasaki Shikibu (tr. Royall Tyler)

The Epic of Gilgamesh by unknown (tr. Stephen Mitchell)

Scott Esposito is the co-author of The End of Oulipo? (with Lauren Elkin) and the author of The Surrender and The Doubles. He's a frequent contributor to the Times Literary Supplement and the San Francisco Chronicle. 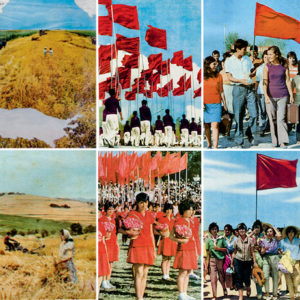 The following is excerpted from Eternal Friendship, a photo-novel by Anouck Durand. Collaged from photographic archives,...